Everything you should take note of while playing Dishonored 2, and explanations for why some things are not behaving the way you think they should. 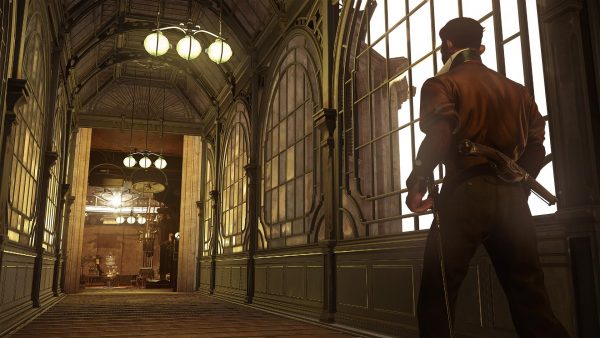 With Dishonored 2 now in the hands of players, we’re starting to see more and more questions about some perceived issues that end being just by design. Some of these questions are legitimate, however, especially when it comes to technical issues.

To make everything clear, a Bethesda community manager put together a list of the most commonly reported issues. The post is big, and includes details on technical problems as well as gameplay quirks that may not be clear in-game. Some of these can be considered spoilers, so we’re going to mark the list that includes them.

-I uninstalled the game, re-installed it later without updating, and now all my saves are corrupt!

RESOLUTION: Your saves were most likely made with a patched version of the game and will therefore show up as “corrupt” on the non-updated version. Updating the title to the latest version should resolve the issue.

RESOLUTION: The in-game install messaging shows an install percentage for the specific section you are trying to access, not the overall game install. You might need to see this screen multiple times if you are playing during a streaming install.

RESOLUTION: The title allows you to choose between Latin American and Castilian Spanish in the Options > Audio menu. Choosing Spanish on Steam will download both sets of Spanish files.

-All my placed Stun Mines and Springrazors disappeared.

RESOLUTION: If a cutscene is started near placed Stun Mines or Springrazors, they will be deactivated. These can be picked up before triggering the cutscene and returned to your inventory.

-My Mana is regenerating very slowly after using an Addermire Solution (Mana Potion).

RESOLUTION: Check the difficulty setting to see if it is set to Very Hard. This is a change in the Very Hard difficulty to make the game more challenging. Lowering the difficulty will speed up the Mana Regeneration rate.

-I quit the game after selecting a character, but I don’t have any saves in the main menu.

RESOLUTION: The game does not make an actual save until you get full control of the character. Quitting out during the tutorial, the opening cut scenes, the character selection screen, or before you first gain control will force you to start a new game and choose a character again.

-I have a lethal kill listed in my stats even though I did not directly kill anyone.

RESOLUTION: When panicked or startled, NPCs may stagger and fall or trip over objects while fleeing, resulting in their death. If possible, reload an earlier save and try to avoid allowing them to either become alerted to your presence, or take them down non-lethally before they have a chance to run away.

-When I zoom in with the Spyglass, auto-aim does not appear to function.

RESOLUTION: This is done intentionally. If you wish to use auto-aim, you will need to not use Spyglass.

-How can I see what Vanity Items I have unlocked?

RESOLUTION: The Vanity Items collected during a playthrough will be visible in your cabin aboard the Dreadful Wale.

-I can’t reach all areas of a map when choosing No Powers.

RESOLUTION: It is not possible for you to be able to reach all areas of the map when refusing powers.

-I tried to toss a guard through a Wall of Light, but he was killed.

-My arms are missing after I load a save.

RESOLUTION: There is a chance that making a save in the water and loading that save can cause your character not have arms. This can prevent you from using powers and weapons. Reloading any save will return your character’s arms.

-The tutorial in Edge of the World lists “possess a rat and find a small passage” as a way to bypass the Wall of Light for Emily.

RESOLUTION: The Possession Power is exclusive to Corvo, but if you are playing as Emily, you can upgrade Shadow Walk to allow passage through rat tunnels.

-Hostile NPCs in Dust District are alerted when I enter hostile territory even if I am not seen.

RESOLUTION: While it appears as if you have alerted the guards, an alert has not actually been registered. You can still enter these areas and remain undetected.

-I can’t swing my sword when trying to Blink.

-I can’t link an enemy with Domino.

RESOLUTION: This may be due to being out of Mana. You will only receive audio feedback indicating this. Obtaining and using an Addermire Solution (Mana Potion) should allow you to link another enemy with Domino.

RESOLUTION: This may be due to enemies moving too far away from each other. Once a single enemy moves far away from the rest of the enemies, the entire chain will be broken.

-Saving the Journalist in the Dunwall Courier counts as being spotted.

-Clicking the prompt to talk to Hamilton in Addermire does not do anything.

-I made the Counter-Serum, but I only have prompts to do lethal and non-lethal takedowns on Hypatia.

-The special action “The Counter-Serum” appeared even though I killed Hypatia/Grim Alex.

RESOLUTION: “The Counter-Serum” special action is awarded to you for making the antidote, not for curing Hypatia.

-I’m in a non-English language and the laboratory module controls in the Clockwork Mansion are not translated.

RESOLUTION: If you are playing in a non-English language and hover over one of the buttons, a localised name for each module will be displayed.

-The Special Action “Ghost Between the Cogs” didn’t unlock when I got to Jindosh undetected in Clockwork Mansion.

RESOLUTION: This will happen if you are spotted at any point in the game before reaching Jindosh in Clockwork Mansion. You will have to go completely undetected in the game up through this point if you want to unlock this currently. Note that this is not tied to the Achievement/Trophy for getting to Jindosh unalerted while in the mansion itself.

-I am missing two Bonecharms Royal Conservatory, and they do not appear when using the heart.

RESOLUTION: Breanna Ashworth has two Bonecharms on her that can be looted. In some situations, such as if you use Shadow Kill on her, the Bonecharms can become unobtainable.

-I got the Heartbeat Reaper achievement/trophy when I activated the Oraculum in the Royal Conservatory.

-I can’t get through the hole in the basement of Stilton’s Mansion to enter the flooded area.

RESOLUTION: The hole is actually too small for you to fit through. Returning to the present will allow you to enter the blocked off area.

-Meagan is still missing and arm and eye if I kill Stilton in the past.

RESOLUTION: In order to have Meagan not lose any limbs, you must stop Stilton but keep him alive. Load an earlier save before neutralising Stilton and knock him out instead of killing him.

-I tried to climb onto a rock by the skiff at the end of Grand Palace and got stuck.

RESOLUTION: This can happen in this location if you mantle the rock at a certain angle. You will have to either attempt to Blink/Far Reach out, and if you cannot, you will have to reload an earlier save.

-The end level stats screen lists two Outsider Shrines on Edge of the World, but I only have one.

RESOLUTION: This stat also includes the Outsider Shrine during “A Strange Visit”. If you chose to reject powers from the outside, you will be unable to get a full 2/2 Outsider Shrines.

-The Duke is not killed when he sets off a re-wired Alarm.

RESOLUTION: This is a known issue. The Duke will need to be eliminated in some other fashion.

-There is no prompt to use the Monkey Wrench Combo attack on a Clockwork Soldier.

RESOLUTION: The Monkey Wrench Combo attack functions the same as a regular takedown, so you will only see a prompt when in stealth and undetected.

-I obtained the Ancient Howling Bolt Masterwork blueprint but I can’t use it yet.

RESOLUTION: The Ancient Howling Bolt Masterwork first requires you to find and purchase the Pyro-sonic Casing for the regular Howling bolt in the Clockwork Mansion level. If missed there, it can also be found in the Royal Conservatory level.

-I have the Reflex Enhancements upgrade, but cannot block stones thrown by enemies.

RESOLUTION: The Reflex Enhancements upgrade lets you only deflect bolts and bullets.

-I have the Lucky Needle Bonecharm, but I never get sleep darts back from headshots.

RESOLUTION: Sleepdarts to the head are never able to be recovered. The Lucky Needle Bonecharm will increase sleepdart recovery from non-headshots.

-My Doppelgangers are not being healed with the Life Bond Bonecharm.

RESOLUTION: Standard Doppelgangers only have 1 HP. You will need to have the Deadly Shade Doppelganger upgrade to utilise the Life Bond Bonecharm.

If you’re after more information, such as details about specific missions, general tips and more, our guide is constantly getting updated. You should definitely bookmark it.

Dishonored 2 is out now on PC, PS4, and Xbox One