The most recent humble bundle may be light on content, but it’s got a few solid games for very little money. 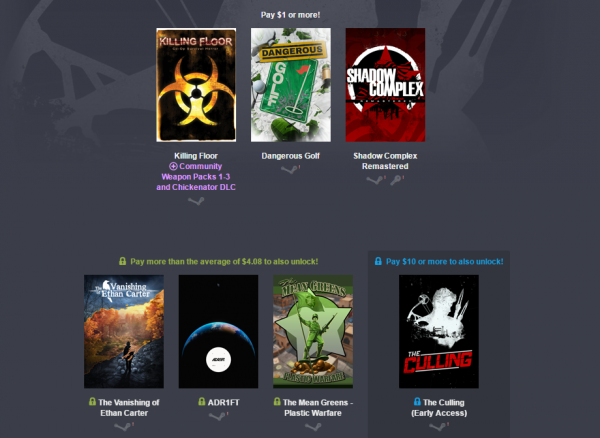 Humble has revealed the latest bundle. It’s called the Unreal Bundle, though that’s not a comment on the value or anything. Unreal here refers to the engine, which is powering all included games.

The entry level tier, at just $1, gets you Shadow Complex Remastered – the recently released PC version of the well-received Xbox 360 Arcade title. You also get Dangerous Golf, the arcade game from former Criterion developers at Three Fields. Dangerous Golf is basically Crash mode from Burnout series.

The $1 also includes a copy of the original Killing Floor, as well as some DLC. Paying more than the average, currently at $4.08, is a where the value climbs even more. You get the mystery adventure The Vanishing of Ethan Carter, Adrift, and The Mean Greens – Plastic Warfare.

Finally, if you decide to spend $10, you get all the above as well as multiplayer survival game The Culling. You can see it for yourself through the link. You have 13 more days to grab it.