The Dutch indie announced a PS4 port of Awesomenauts last year, and had expected to deliver it in the console’s launch window. The developer found the port a little tricker than it expected, unfortunately, but found an ally in Abstraction Games, which developed the new version.

As a result, Awesomenauts Assemble arrives in North America on March 4 and in Europe and beyond on March 5, for $10/€10. 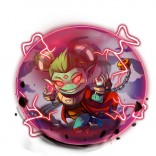