Xbox One has launched in 13 territories, and we're collecting all of the essential links, photos, and juicy reports from the big events as they come.

Microsoft has finally unleashed Xbox One on the public. It's the company's first console launch since Xbox 360 released November 22, 2005.

It follows a wave of Xbox One hardware and launch title reviews. Get your fix here:

Microsoft hosted its key Xbox One launch events in London and New York. Here's a photo of Leicester Square being dolled up in green for the big day, taken by none other than Phil Harrison:

The excitement (and the stage) is building at XboxSquare (aka Leicester Square London) for #XboxOneLaunch pic.twitter.com/js2M1gUZf9

The console went on sale first in New Zealand, and the world's first person to buy an Xbox One at retail is Dan Livingstone. Here's a photo, care of Microsoft's Phil Harrison:

Congratulations to Dan Livingstone of NZ - you're officially the first Xbox One owner on the planet #XboxOneLaunch pic.twitter.com/zgLzOVWccA

Here in the UK, GAME Box Park in Shoreditch announced it was opening up 200 additional Xbox One pre-orders. Customers also received a ticket to Microsoft's launch event in Leicester Square, London for their trouble.

Here's Vasi Dube, 29 years, from Woolwich with his ticket: 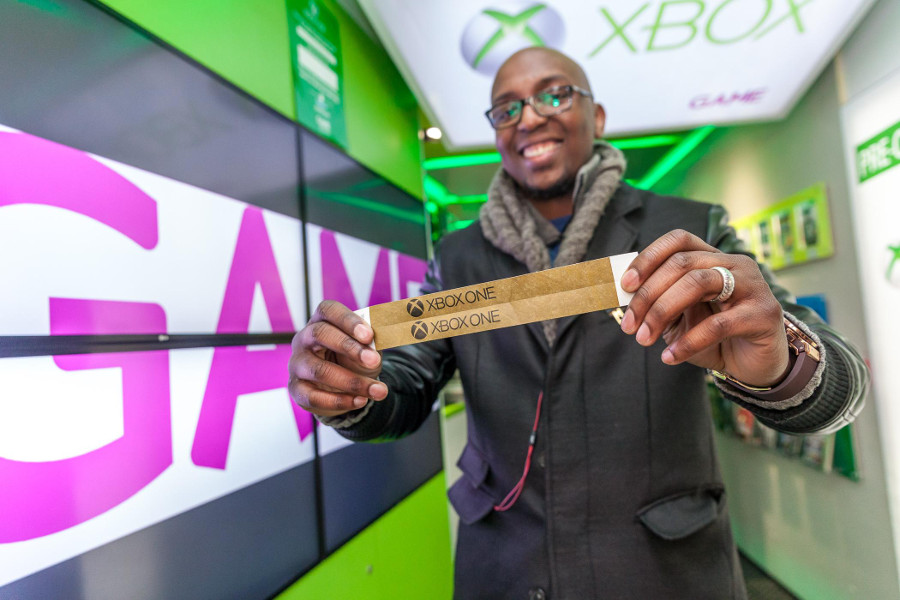 Over in Australia, EB Games merchandising director Shane Stockwell said that Xbox One was officially the nation's biggest console launch. He added, "EB Games has been operating in Australia for over 15 years, and we have never seen anything remotely like this before – it’s an extremely good time to be a gamer. What we’re seeing here is absolutely unprecedented." Hit the link for more details.

Back in Leicester Square, London the big Microsoft event was starting to take shape. The Forza 5 car even popped its head round the door to say hello, look at these pics, courtesy of GI.biz: 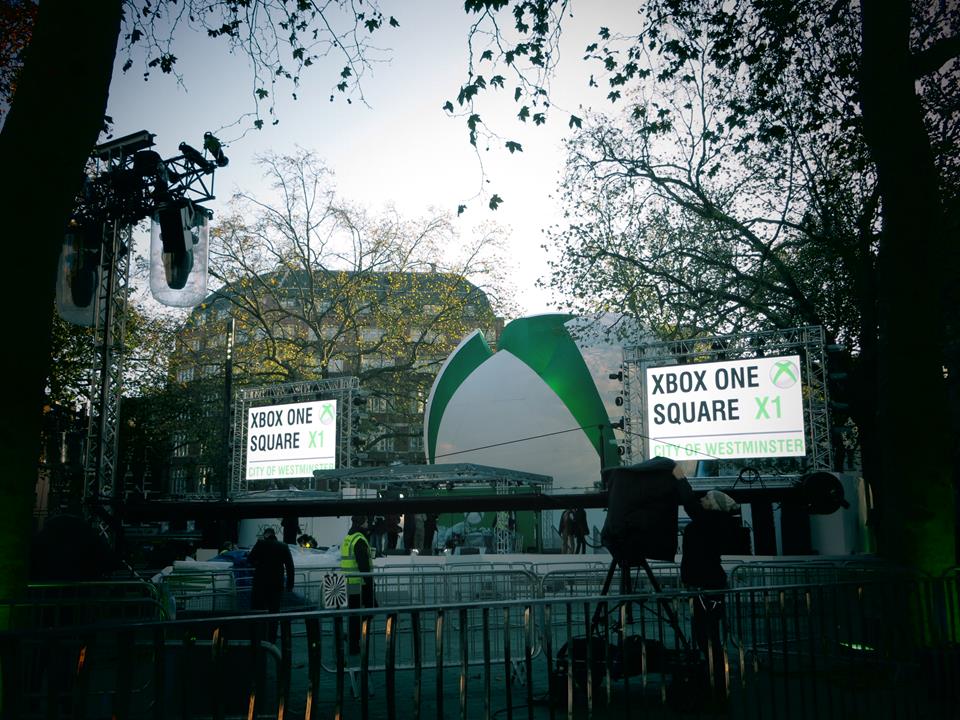 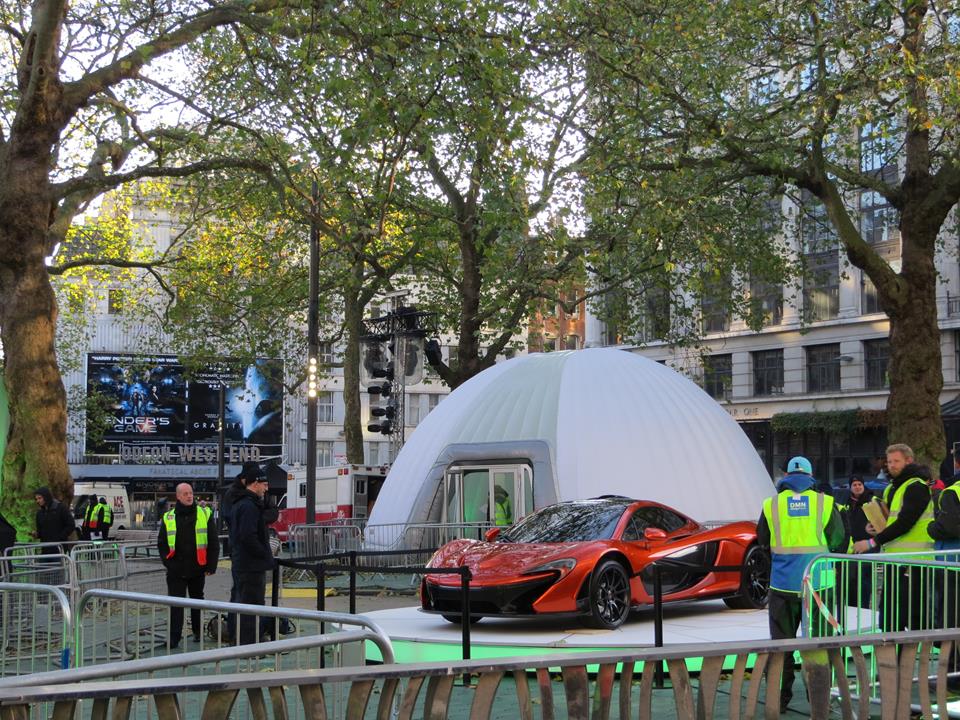 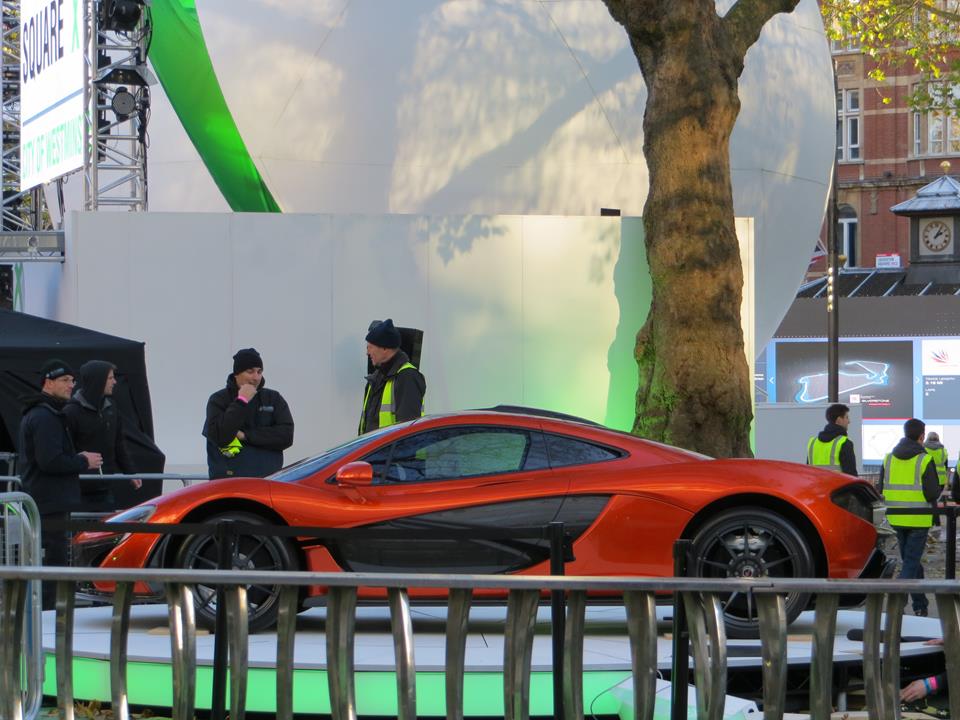 As the night rolled in, people started flocking to the square in weird outfits, or plain old boring togs: 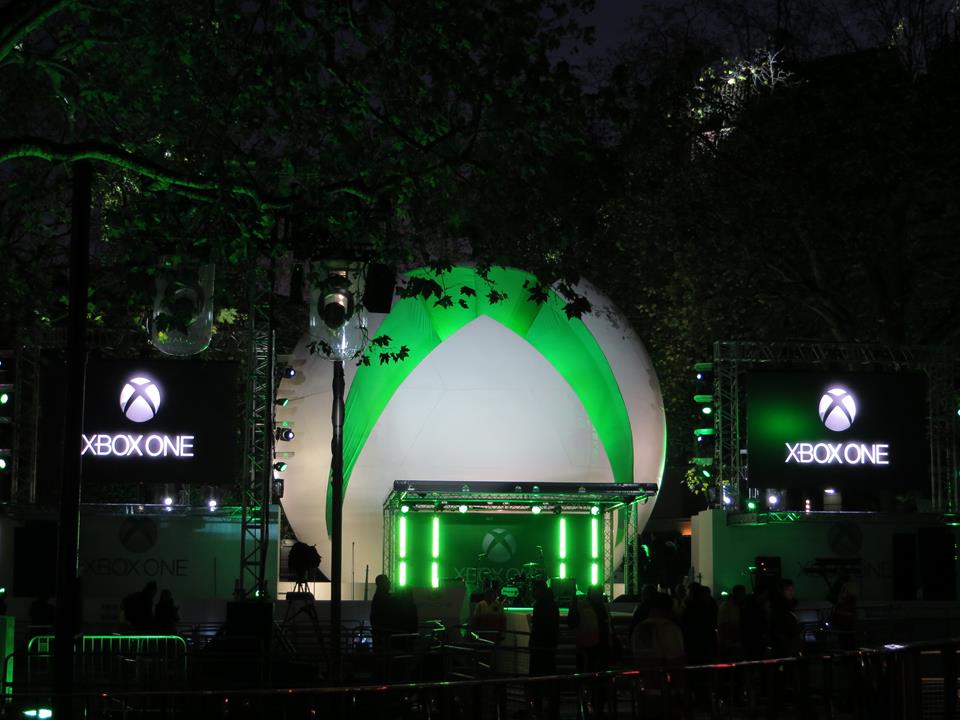 But back in the Toronto, it was only coming on 4pm, and eager fans were starting to line up outside Best Buy: 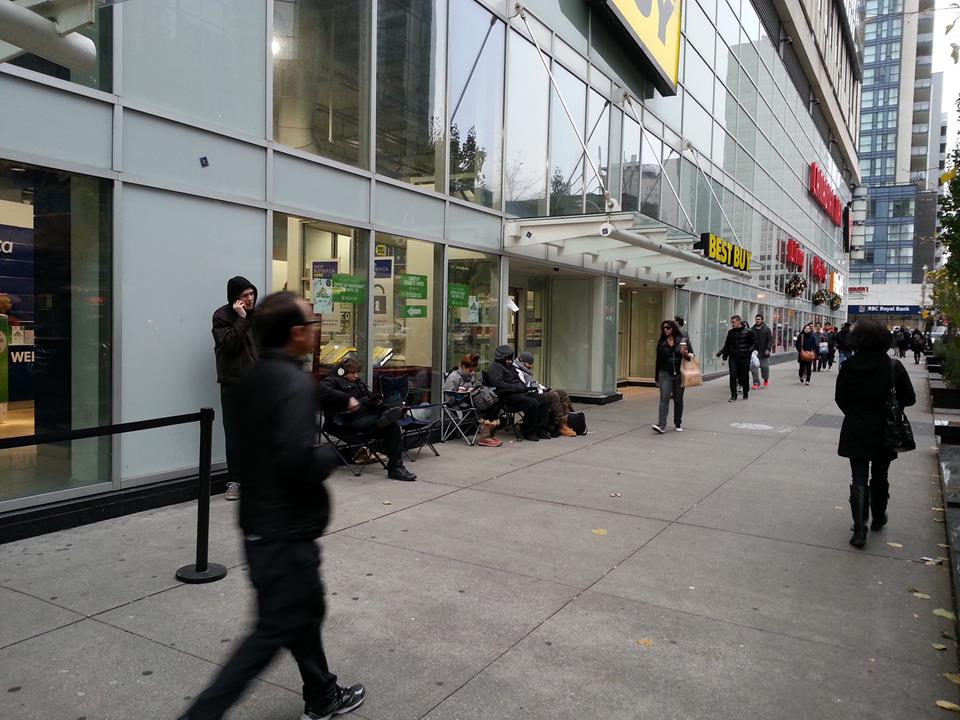 Over in Berlin, Germany the sides of some building has become awash in Xbox One green. It's like the bat symbol for consoles: 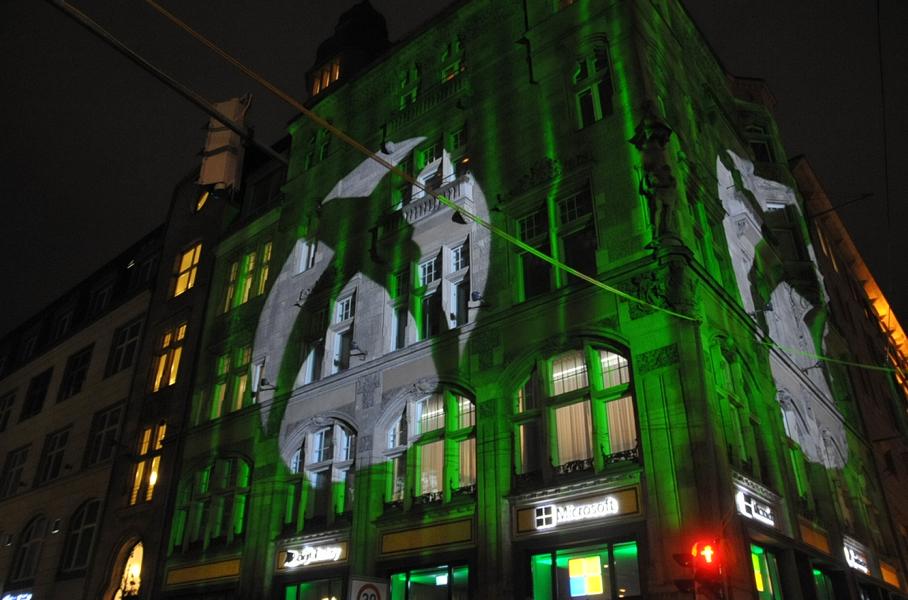 Microsoft community man Larry Hryb had his Vine app cast over Times Square in New York City, just as Xbox One adverts started to take over its many digital billboards:

The #XboxOne takeover of Times Square has begun! https://t.co/qhT0guwQ2R

Meanwhile, back at the Xbox One's UK launch has since been called "massive" by GAME's chief digital officer Ian Chambers, who said sales of Microsoft's new console will easily outweigh those of Xbox 360.

Here's some photos of GAME's flagship launch at its pop up store in the Trocadero, London: 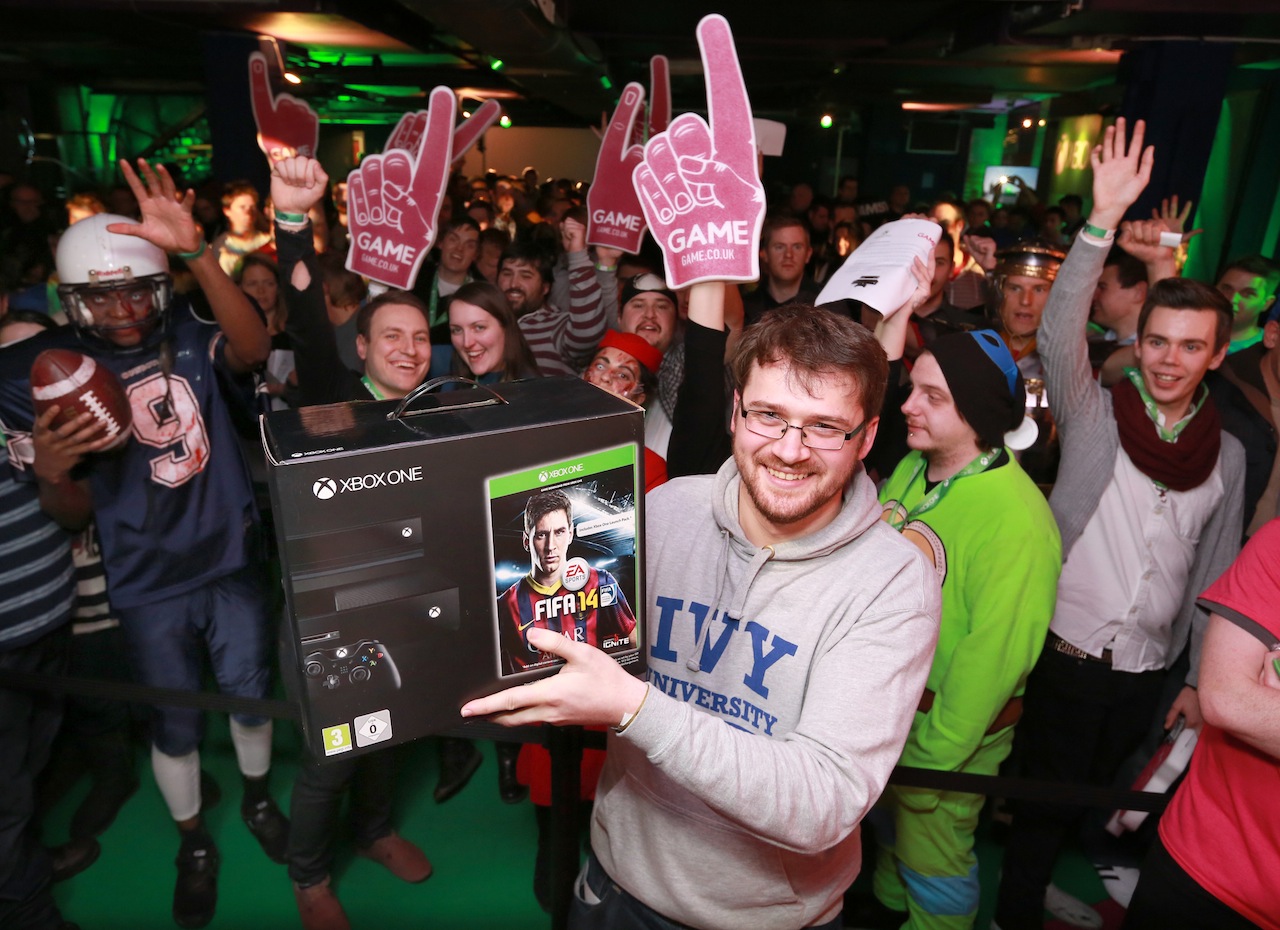 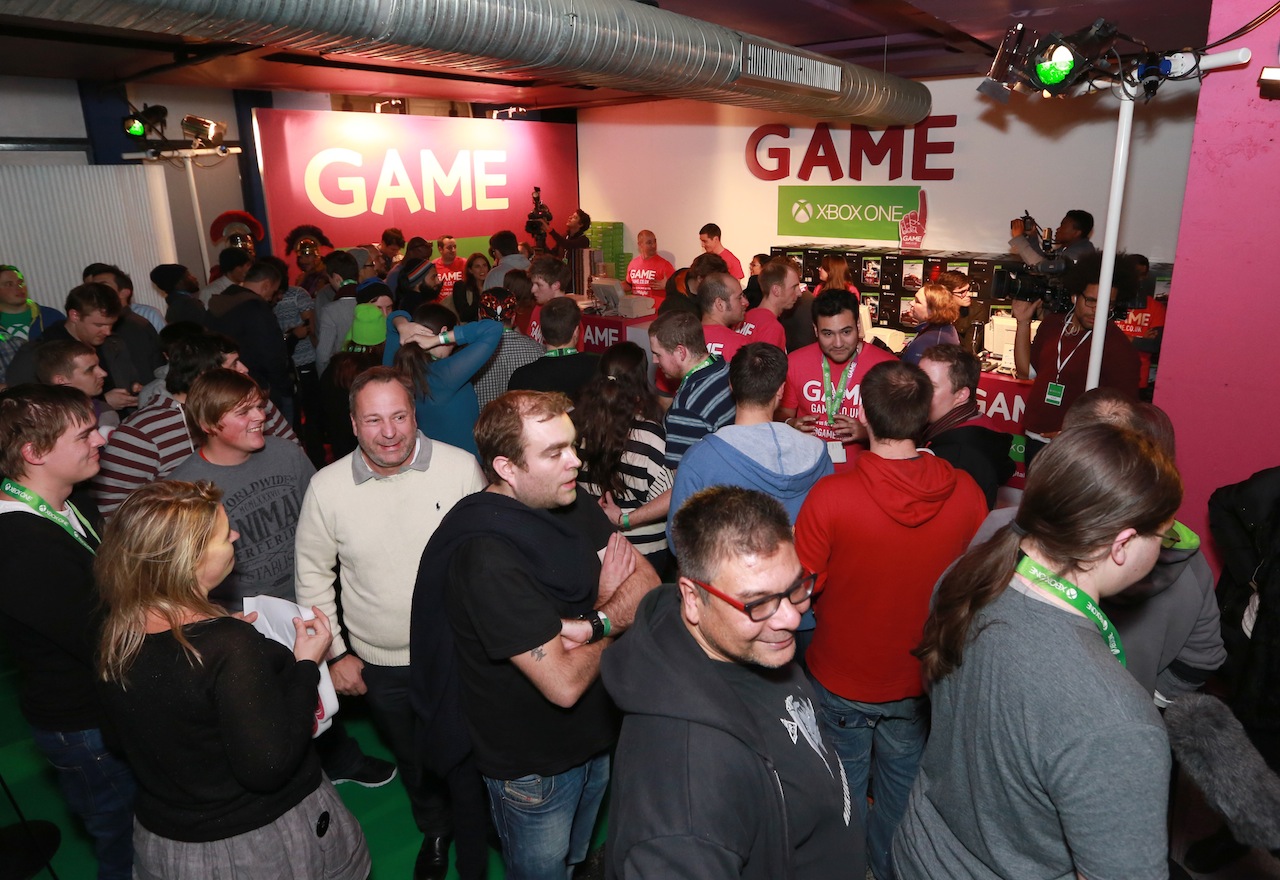 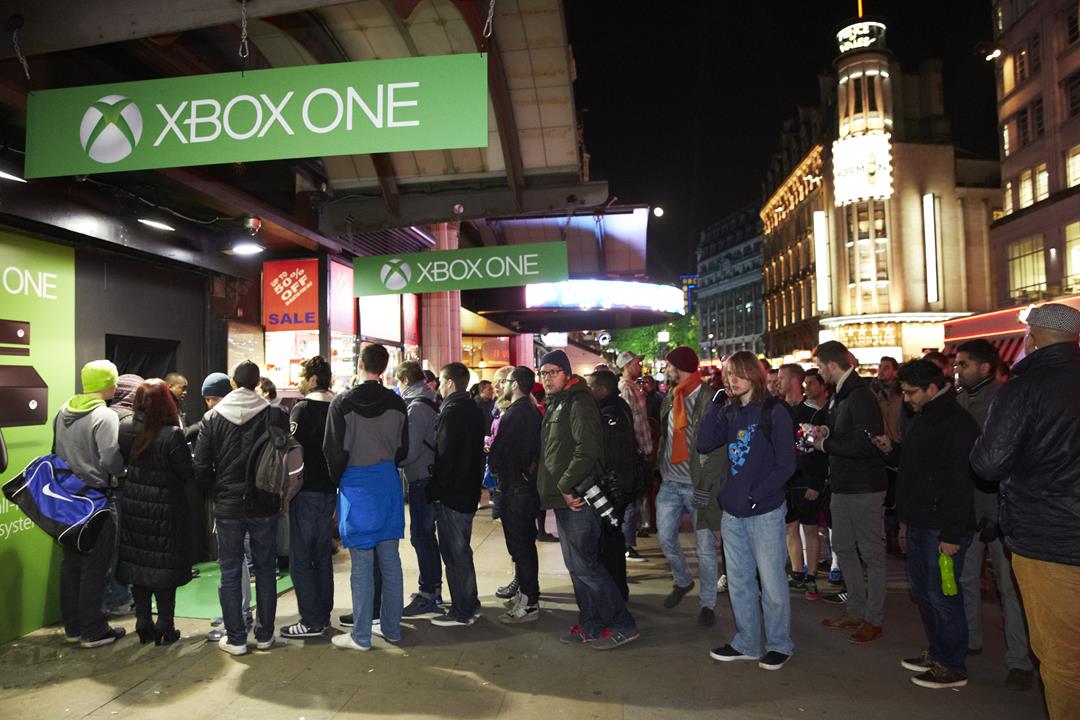 While UK artist Plan B entertained fans in Leicester Square on a stage shaped like an Xbox sphere: 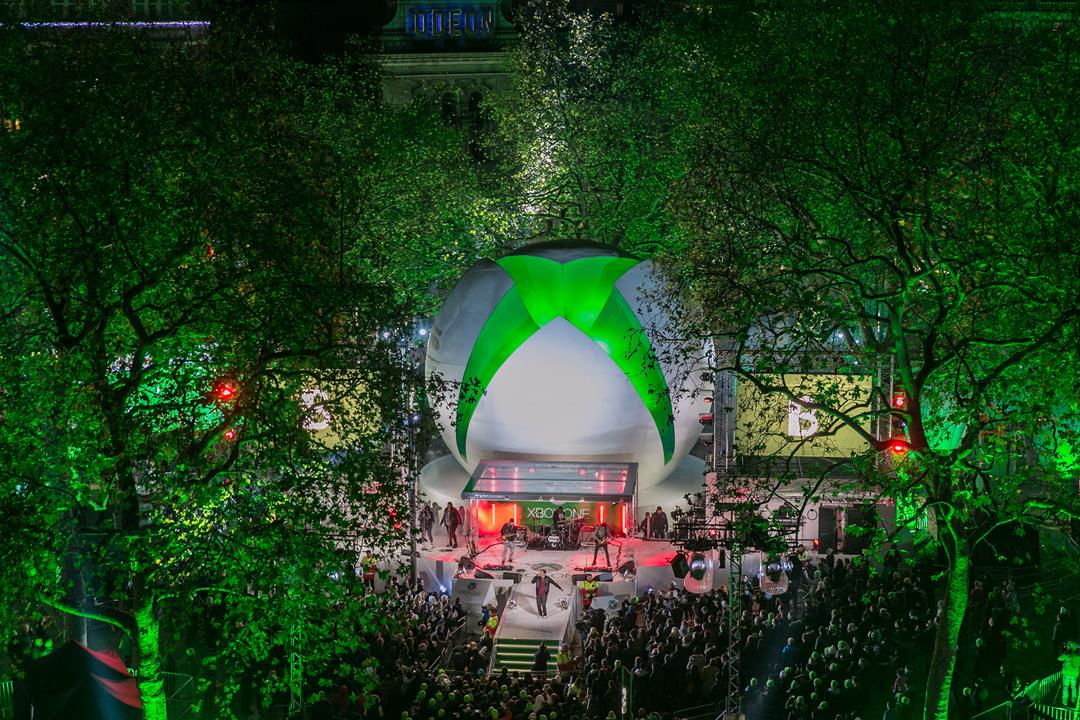 Back in New York, Best Buy received its delivery of Xbox One consoles, via armoured truck. No really, look: 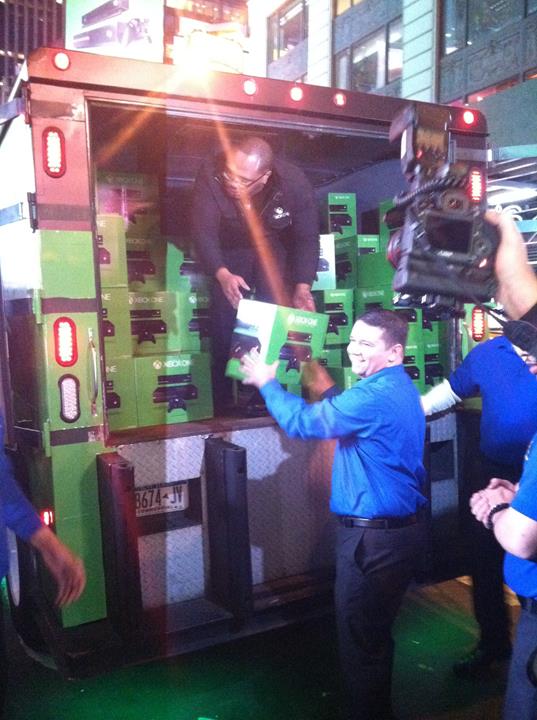 Midnight in New York and Xbox One finally goes on sale across the States. Here's the first lucky, tired people to hit the tills: 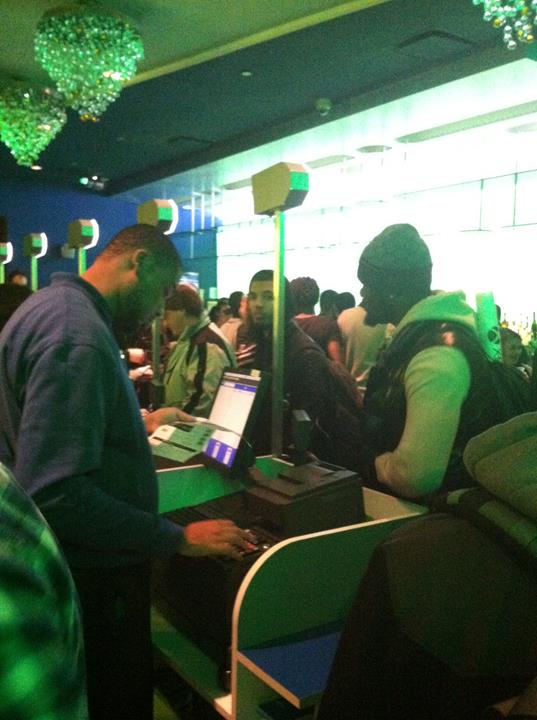 More as it happens. Stay tuned...