Tokyo Jungle launches in Europe 26th September, but VG247's Dave Cook has been playing it for a few weeks. It's absolutely insane, and it could be the PS3's biggest cult hit since Demon's Souls. Read on to find out why.

What happens to man's best friend when man is no more? That's the underlying and ludicrous question asked throughout Tokyo Jungle, one of the most bizarre yet inviting PS3 games to come out of Japan for some time.

Take the game's star for example: a tiny Pomeranian toy dog, once the cherished and pampered companion of a Tokyo family, now forced to fend for himself in a world without humans. The choice is clear - go feral or die.

This is a savage new world full of empty streets, burned out cars and a concrete metropolis choked by the return of nature. Planets struggle through cracks in the tarmac, and predators stalk the plazas of the Shibuya district in search of prey.

It's the kind of imagery that apocalyptic fiction thrives upon, and while it should make for a harrowing vision of mankind's demise, it's actually one of the most hilarious games you will play this year.


Watch VG247's Dave Cook play through a game of Survival Mode as the Pomeranian dog. It's odd.

Tokyo Jungle does feature a story mode that doles out tutorials and snippets of plot, but the real meat of the package is survival mode, and it's comparable to a wide range of games.

It has Metal Gear Solid's stealth, the trial and error progression of Dark Souls, the pack attacking of Pikmin and the constant time pressure of Crazy Taxi. But even then the game still feels unique because if you pitched this game to someone on paper, you'd most likely be branded a lunatic.

Survival mode gives you a choice of any animal you want. Predators and herbivores play differently, but meat-eaters are by far the most fun to control. Your aim is to survive long enough to breed and continue your animal's bloodline - which is essentially a time extend - and to keep the circle of life going for as long as possible.

You must reproduce every 15 years - which is about 10 minutes of game time - and you do this by roaming the streets and marking territory to attract mating partners. Along with the year counter, you are also kept under pressure by your animal's hunger gauge.

Once your hunger bar depletes, you lose health until you die, so hunting other animals and eating them is a constant concern. This is where the Metal Gear Solid comparisons come into play.

Other animals are crafty, so you need to law low in tall grass or behind cover to sneak up on prey. There is even an alert phase if you get spotted. Simply hide for a while and the heat dies down.

If you manage to get close enough to your prey without getting spotted you can launch a stealth attack, which is the key to killing animals twice your size. So yes, even though you may play as a newborn chick, you can theoretically take down a zebra with one bite to the throat if you're smart enough. Like we said, the game is insane.

Once killed, you can eat prey to fill your hunger gauge and gain weight. Gain enough weight and you level up. Aside from killing other animals, you need to mark three territory points in any of Tokyo's zones. This attracts females to the area, but they'll only take notice of you if you level up enough.

After you reach 'Boss' level you will be compatible with any mating partner, and all you need to do is find a mate, lead her to a nest and 'do the deed' so to speak. Once that's done, control then shifts to your children and the bloodline continues. You can keep this going for as long as you can.

So that's the short version of how Tokyo Jungle works. If you play as a herbivore, you have to eat crops instead of other animals, but the principle is the same. If the stealth approach fails you can also engage in a bit of hack n' slash combat, or have your fellow siblings attack as a pack, just like Pikmin's combat. 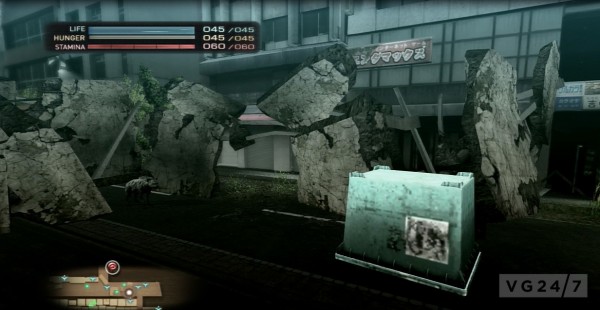 Is that Solid Snake under that crate. No it's a deer...because that makes much more sense.

Yes it's a head-scratching prospect, and other hazards like smog, fleas and disease make things even more complicated, but once everything clicks Tokyo Jungle's genius begins to shine through.

You really do get the same rush as score attack games like Crazy Taxi, but along the way you need to exert the same level of caution as you would in Dark Souls, because you never know when a Hyena is lying in wait in tall grass, especially when night falls and your visibility is dangerously low.

So it's smart and chucks a lot of neat new ideas on the table, but is Tokyo Jungle any good? Well yes and no, because it's a difficult prospect to stomach, especially for those who don't like taking a leap of faith with bizarre games.

On one hand gamers should appreciate that each playthrough of survival mode puts enemies and hazards in different places each time, resulting in high replay value. The challenge is also inviting, and it's genuinely rewarding when you manage to last a little longer each time because it's all down to your own skill and resource management.

What might put people off is that many animals play too similarly, and the game's sombre message is diluted by a daft plot and oddball premise. This all depends on the individual of course.

Plus, the music sounds like the end result of a drunken jam session between deadmau5 and Aphex Twin. That's not a sleight against either artist, but it doesn't fit the game's tone. Again, if you like your games wacky, it won't impede on your enjoyment at all.

Tokyo Jungle's survival mode is reminiscent of iOS score attack games like Canabalt or JetPack Joyride. It's utterly addictive and absolutely nuts in equal measure. There's a lot to unlock, and every session is different, so the game's excellent value isn't up for questioning.

Kudos also needs to go to developers PlayStation C.A.M.P. and Crispy's for the sheer imagination and brass balls needed to make something this unique at a time where new IP is a great risk. It's unlikely that any big publisher would have touched this even from a distance.

It's a curio - a game that will puzzle causal observers, but that fans of weird or profusely Japanese experiences will enjoy wholeheartedly. You already know which camp you fall in to, and if it's the latter, just trust us on this one, you need to try it.