Like the three billy goats gruff, I spend my first several minutes with Nioh 2 going 'trip trap trip trap' across a bridge that's guarded by a troll. That troll doesn't shout "Who's that tripping over my bridge?" as the one from the fairytale does, but its sudden and furious appearance has the same effect. The troll is actually a yokai of Japanese mythology, a type of yokai that I had, in fact, massacred many times in the first Nioh. Believing I have its attacks committed to muscle memory, I charge in ready to cut shapes with my katana, and die soon after. Then again. And again. Why is it causing me so much trouble?

I don't find out until I swallow my pride and play the tutorial that's on offer when you die. It teaches me how to use my yokai powers, which weren't in the first game at all, and it turns out are vital to any kind of success in this sequel. Most importantly, I learn that when an enemy flashes red (you can't miss it), they're about to launch into a devastating blow that is hard to come away from unscathed. These attacks, which often cover a lot of ground, feature several slices or a grapple so you can't block or dodge them on a fluke. That leaves me with one option. When the screen goes red, I need to hit R2+O to use a quick yokai attack that interrupts and staggers any pissed off whirlwinds coming at me. 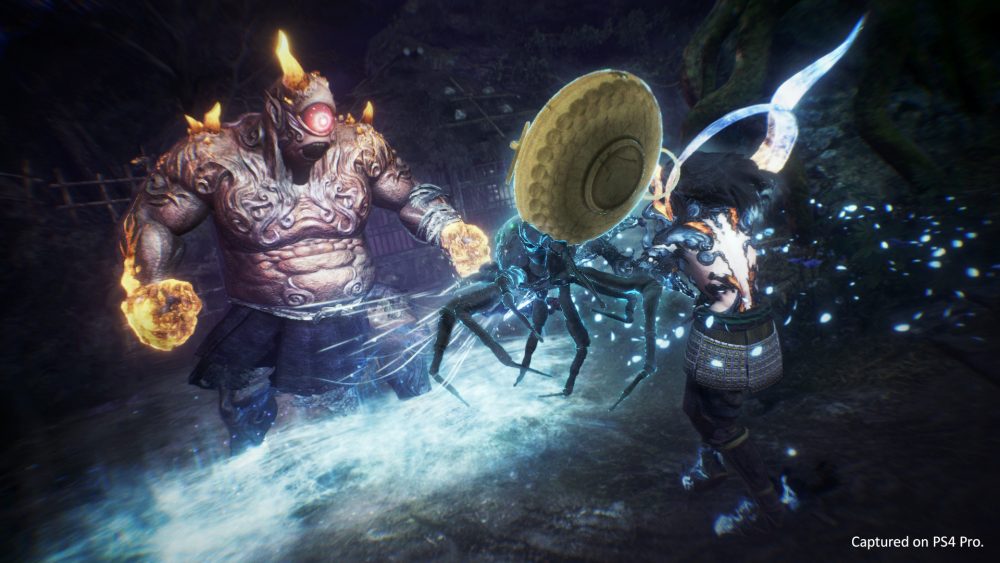 I head back across the bridge armed with my new knowledge, and soon enough... KAPOW! Sit down you absolute anus of a troll. The attack feels powerful as hell, like a gorilla punch to the balls. Once I get it locked down, I'm soon trotting across the bridge toward the greener grass on the other side… er, make that a wooden fort that's recently been redecorated with stinking piles of corpses and burning planks. Not deterred by the hellish sight, I march in and soon realise that the addition of that yokai attack is making me play Nioh 2 much more aggressively than I did the first.

It's the missing piece that the 2017 game needed for it to gel with me. I found the first Nioh to be a bit of a jumble. Between all the items, equipment, ninja skills, stances, magic, and guardian spirits there was too much fiddling with menus and item shortcuts. It took me away from the action too often, and when I was in the thick of it, I found myself fumbling as I tried to remember which buttons I had assigned to antidotes or kunai. It's probably great if you're a minmaxer but for me it was an exercise in tedium. This hasn't disappeared in the sequel (add Soul Cores and Yokai Skills to the list for starters), but it has taken a backseat, as the importance of rhythm in combat is more pronounced.

The first Nioh introduced ki restoration to masocore RPGs and was probably its best idea. Ki is your stamina, assigned to a meter, which is drained as you run, block, evade, and attack. Pretty standard for most RPGs since Dark Souls came out in 2011. However, after an attack, the ki meter could be restored by hitting the R1 button at the right time. That meant you could do a combo, instantly restore your ki, and then chain together several more strikes so as to overwhelm your target. In Nioh 2, you can supplement your bladed barrage with the new yokai attacks. In fact, I find that I'm forced to when enemies see red and charge up one of those destructive strikes. 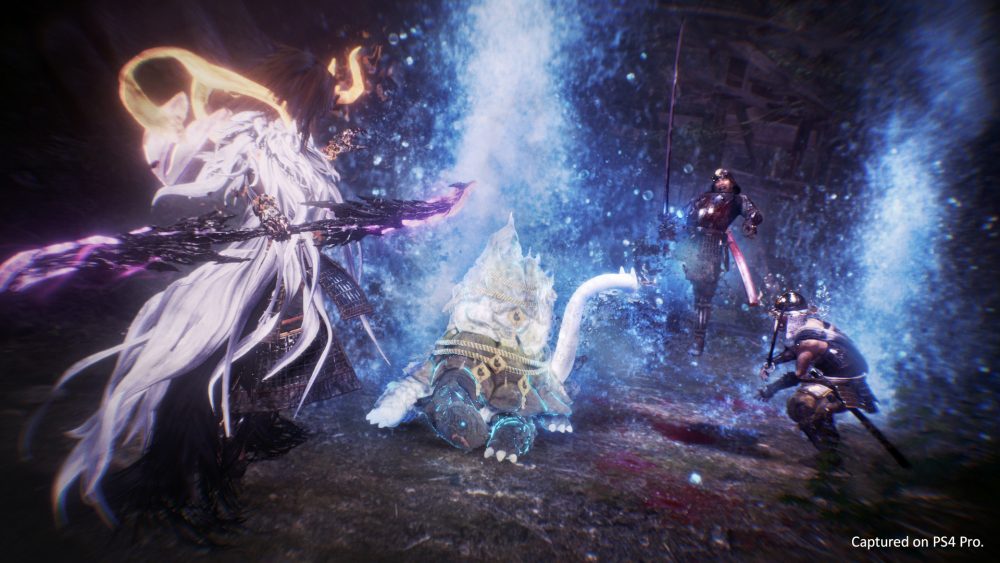 When I hit the right rhythm - restoring my ki and countering red attacks - I feel like the lead dancer in a tango, while my demonic enemies are incompetent partners unable to match my footwork. This is Doom 2016's push forward combat applied to swords instead of guns. The best way to fight is to keep charging, interrupting any counter-attacks and staggering foes until they're sent to oblivion. With this, Nioh 2 has finished carving out its niche in the masocore RPG genre. Dark Souls taught us patience and blocking, Bloodborne was dodging and parrying, and Sekiro was timing and deflections. Now, Nioh 2 wants us to find the perfect flow so as to strike without relenting.

But that's only one way to play Nioh 2. There are three forms of Yokai Shift: brute, feral, and phantom. I'm only able to play as the brute, hence my aggressive approach. But you can choose feral to prioritise dodging and quick attacks. Or phantom if you'd rather keep your distance and attack from afar. With loads of different weapons and abilities on top of that, it's clear that Nioh 2 will accommodate a huge range of combat styles, so you should be able to find one that suits you. But the important addition for me is that you can immediately and drastically change your combat style by flicking to a different Yokai Shift form. Doing so gives you access to a new set moves and skills while removing others from your repertoire. The pace at which you move, the heaviness of your attacks, and even the range available to you is all different. You can fine tune from there as much as you wish but that doesn't feel as necessary as it did in the first game. Restoring your ki and using the yokai attacks at the right time feels like the main factor in staying alive. 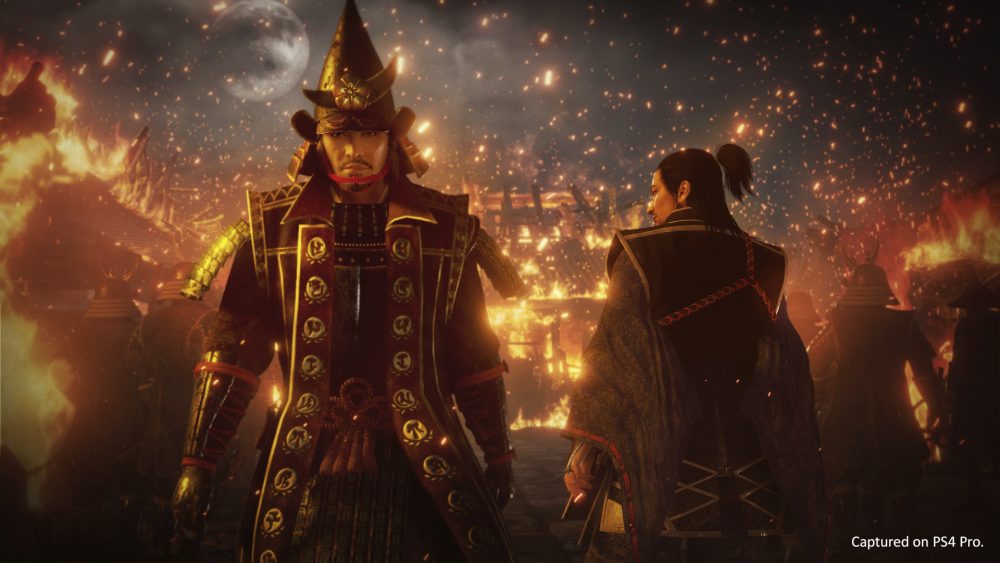 This suits me down to the ground and it gives me the confidence to welcome the unexpected. And Nioh 2 has plenty of it. Ninjas jump out from behind barrels while trap doors send me plummeting into fire pits. None of it feels too punishing in the multi-tiered fort I'm tasked with climbing up, at least. This is due to the tighter level design, which has shades of the verticality of Dark Souls at its best - a central hub where I respawn, and plenty of ladders to kick down that open up shortcuts back to later areas.

The best surprises, however, come in the form of the wildly different yokai demons. Yes, thankfully, it's not the same horned git jumping out from the demon realm this time around. There's a real sense of fun in the designs of Nioh 2's monsters. A particularly memorable one giggles as it scoots around, sometimes lifting the back of its robe and farting out toxic fumes, at other times throwing vials of the green gas at the floor. Another hides its face under a cloak as it hovers above the floor and chants a ritual to cast fireballs. I got the opportunity to ask Team Ninja president Yosuke Hayashi which Nioh 2 yokai is his favourite. "It would probably be Ippon-Datara - it's the one with one leg and the big hammer," he told me. "I spent a lot of time trying to counter that yokai in order to adjust it perfectly for the players. It took a lot of trial and error. Somehow I got attached to it."

As Hayashi alludes to, it's not just the looks of these yokai that distinguishes them. One I remember well resembles Venom, complete with a long tongue that it flicks to set me on fire, but what I love is how it hops around madly like a muscular frog. There's a newfound sense of agility in the enemies that keeps me on my toes. The ninjas embody it best. They constantly somersault away from me, but when their health is low they suddenly try to jump on me with a grapple move. If successful, the ninja blows up in my face, killing themselves and taking a huge bite out of my health bar.

Much of the rest of Nioh 2 is familiar. There are the cute kodama scattered around each level to find and send back to the shrine. Chests tease me from behind blockades and encourage exploration of the nearby area for breakable walls. There are, of course, mighty bosses to take down too. This is where the Yokai Shift ability really comes into its own. Under the health and ki meter in the top-left corner is a third meter. This measures Yokai Force. Using yokai moves drains it, but if I let it fill up then I can shift into Guardian Spirit form for a short time. This replaces the Living Weapon from the first game and is much more dramatic and better for it. I have powered-up quick and heavy attacks, a nasty grapple, and don't take any proper damage while in this form. Triggering it is vital to take on bosses as I find out when going up against one with his own Guardian Spirit. I fail the first couple of times but end up beating him by summoning an NPC companion so we can tag team him. If I needed more help, I could have dunked myself in the nearby hot spring, which regenerates health for a short period.

Freely offering this kind of assistance, which should make Nioh 2's most testing moments a little more manageable, is something Team Ninja has been focusing on in the months leading up to the game's launch on March 13, 2020. I found this out when asking Hayashi what his team had learned since the game's open beta in 2019. "Most of the feedback we received in beta was really positive," he said. "Some of the negatives were around the unfair battles and the difficulty of it, so we adjusted it to balance it better so the deaths will feel right."

If you found the beta gruelling then don't write Nioh 2 off yet as the launch version shouldn't be quite as distressing. But obviously don't expect it to come with an easy difficulty option. I'd also address those who, like me, struggled to find a groove with the first game, and say that Nioh 2 is worth a go. I quickly found a way to play it that suited me whereas the first game still hasn't quite clicked. With that came an eagerness to tackle whatever Nioh 2's haunted Sengoku-era environments had to throw at me. Even if it was a man's guff in a bottle.

Check out our Team Ninja interview for more.