There's a legitimate Halo mod that allows you to play as a Grunt instead of Master Chief, in which your sole purpose for playing is to take down John Halo himself.

Halo: Covenant Edition is a mod for Halo: Combat Evolved that reimagines the game from the perspective of the baddies. Although we've all grown to love the hulking stature of 7-foot-tall army man John Halo over the last 19 years, he is the physical embodiment of Bad Guy when you reverse what the game's narrative wants you to think.

Put it this way: The Covenant are in the wrong because that's what Halo: Combat Evolved tells us, but what if a bunch of aliens made a Halo game for Covenant teenagers? You bet John Halo would be the final boss, and that's what this Halo mod sets out to implement. 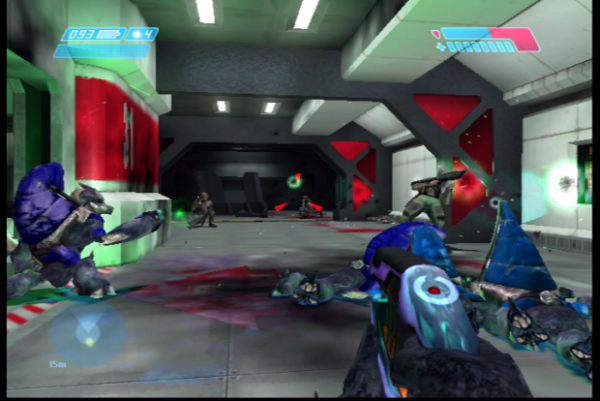 As you can see from the screenshot above, you are now a Grunt with a little Plasma Pistol. Your mate on the right is after getting knocked out by some UNSC marine, so you and your other pal need to retaliate. I reckon it's probably going to be less than 10 seconds before the Grunt on the left whips out two plasmas and legs it into the middle of all the marines - they're always the most annoying ones when you're playing Halo the original way.

On top of the Grunt version, you can also download a Covenant mod that allows you to play as a Jackal now - although personally I reckon the Grunt one sounds a whole lot more enticing, because apparently you can spam taunts at Master Chief and call him a demon.

In somewhat related news, somebody recently reimagined Halo Infinite as a Nintendo 64 game. It even features a nice little reference to internet sensation Craig the Brute, who we're not going to see much of over the next while given that Halo Infinite has been delayed until 2021.

Apparently, this is mainly because of troubles that arose due to heavy outsourcing.