Get Even developer The Farm 51 has come up with a positively bonkers shooter concept that transcends the borders of reality. VG247's Dave Cook speaks with studio co-founder Wojciech Pazdur about the next-gen project. 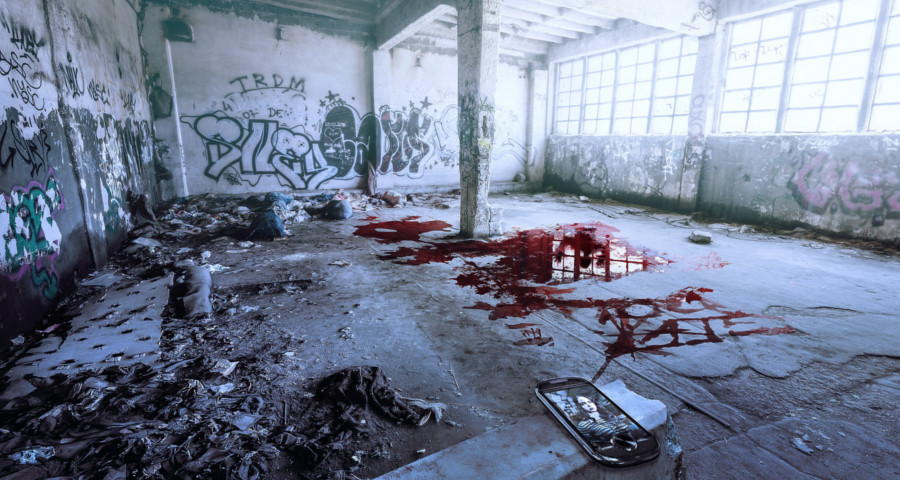 For about the last six months The Farm 51 has been laser-scanning some of the creepiest abandoned locations within its native Poland. From burned-out insane asylums to ghostly wastelands; absolutely nothing was off the table, and when the country had no more eerie sites left to survey, the team started visiting other countries to search for more real scenes of decay and destruction. Get Even might be a game that takes players across the fringe between dreams, realities and dimensions, but it had to feel tangible to a point.

The concept has lingered in the mind of studio co-founder Wojciech Pazdur for a long time now; inspired by such reality-hopping films as Source Code, The Butterfly Effect and The Matrix. Although Get Even is a shooter, he wants you to constantly question everything you see, to distrust the twisting motives of characters and to try and separate reality from fabrication. He wants you to constantly ask yourself, 'what is real?'

Watch this and ask yourself 'what is real?'

This blurring of lines comes courtesy of Get Even's marquee mechanic; the seamless blending of single player and competitive multiplayer. There are two campaigns housed within the game's narrative that play out across two lead characters: one is a straightforward, linear story experience, and the other sees the player traversing a more open, and unpredictable path. In the latter, every time you enter a single-player mission, one solitary human player will phase into your world disguised as an enemy.

You'll both be playing your own single-player campaign, but the trick is that you'll never know which one of the enemies in front of you is human-controlled. There will be no username floating above their head, and no achievements or reward for killing them; just the fact that someone out there is real and could be your potential killer. From a narrative standpoint, the game gets away with this by having each player hopping through multiple dream-states and realities, phasing in and out of different worlds as they go. It's wildly ambitious.

"Basically," Pazdur explained to me over Skype, "it's just part of your single-player experience, and you have to fight your way against enemies, and some of them can be human. Why is that? Well, it's all about our concept which asks at many different levels, 'what is real?' Our teaser [trailer] was asking the question 'what is real?' when you're comparing the real world film sequences shown against in-game environments, which are presented in the in-game engine.

"That's one way we're trying to play with this question, but the second level is in the gameplay experience where you are simply entering the game, when you see some enemy running at you, and you don't really know if he's an AI bot or human. You can somehow deduct it from his behaviour, but you can never be sure that someone who is playing against you is a bot you can just kill and shoot, or a real human who can play very different tactics. 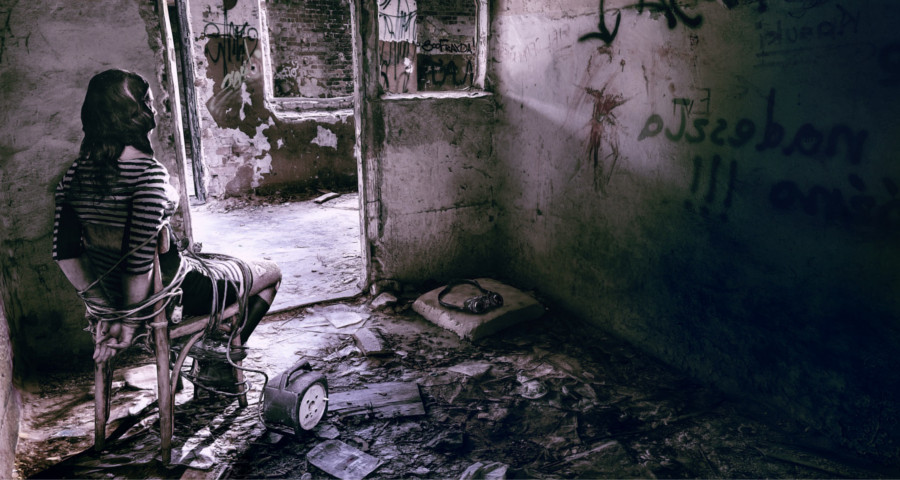 "It's also story-explained what these enemies are," Pazdur continued. "They are not random enemies; these are guys you meet in different levels of realities or different levels of consciousness, and so it's not a problem if you have killed him once, because in another reality he may still be alive. It's also important that you can play the game in single-player. If nobody joins your game or if you're disconnected from the network, it doesn't steal anything from the experience; you will only play against bots. If you really want to play single-player and not against other people there is an option to prevent others from entering your realities, so it's basically a single-player game."

The trailer Pazdur mentions does a great job of showing off a real-world asylum and actors dressed as troops, then splicing it with scanned, in-game representations of the building along with digital avatars. It's clever angle that was conceived as early as 2010, but is one that could only be achieved on PC and next-gen consoles for this technical reason. He explained that at most, it took between two and three months to scan a single environment for use in the game, along with countless photographs of some truly creepy abandoned real-world sites.

"We started the real work about five or six months ago," Pazdur recalled. "The focus was to use scanned environment technology and to prepare it for use in making the game. For a very long time, our art direction for the game was to play with these environments, but about half a year ago we decided to create the whole game using this unusual approach. We spent a lot of time on technical preparation, preparing the framework and objects, the technical pipeline to be able to use everything we scanned on quite typical hardware configurations.

"Right now we are doing some further trips into areas not just in our local Poland, so basically there will be a couple of places all around the world, but technically the game will not be so huge. The kind of art style we want to use is mostly based on abandoned places that we call internally, 'real-world post-apocalyptic scenarios.' We have researched hundreds or maybe thousands of different locations, mostly based on photos, then trips to take our own photos and scanning some of them in. It suits the dark tone of Get Even."

Pazdur conceded that while Get Even could have taken players to some exotic locales, such as the Himalayas or dense jungles below the Equator, it wouldn't have felt as 'real.' What he wanted was to take players to places that they could perhaps stumble across if they walked 10 kilometres in any direction, like a dilapidated farm hours in the country, or vast farm land. Only then could the team create a stark contrast between reality and fantasy. It's an intriguing concept that - according to Pazdur - led to some initial office fights over whether it could be done. 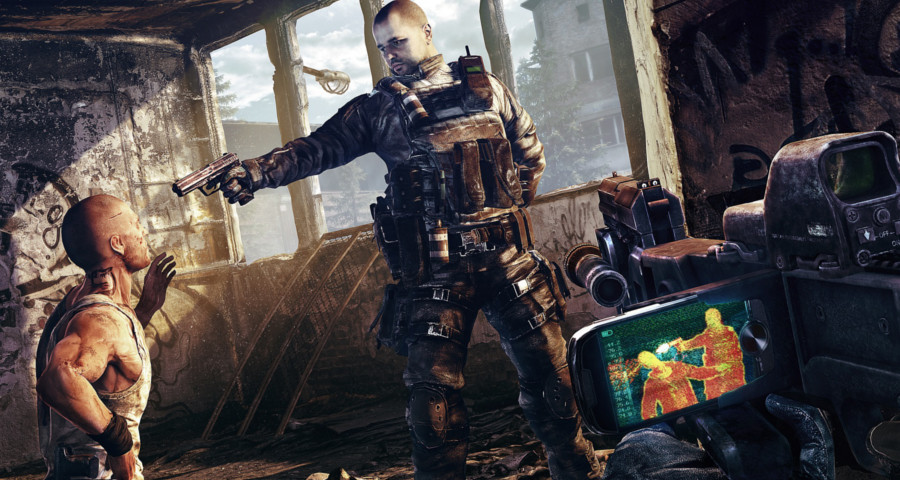 In fact, the original Get Even concept was more sci-fi and colourful than what you see today, but it ultimately ended up being much darker. Pazdur even teased that it might even get a touch creepy at points. It's a shooter at its core of course, and while you'll be wasting enemies with a range of firearms seen in most modern-day shooters, there is one particularly novel and slightly 'sci-fi' weapon that you may have noticed from the first round of reveal screens: a gun that shoots around corners.

"There can be pistols, SMGs and grenade launchers with thermal view, satellite maps and other cool gadgets at hand," Pazdur teased, and stressed that the weapon selection between both campaigns will vary as a way of setting a different pace between them. The second campaign - with the multiplayer phasing - will feature more unusual weapons and gadgetry, along with the corner-shooting gun. Pazdur feels the device could amount to the, "first good implementation of cover mechanics in first-person combat."

Pazdur wasn't giving up much in the way of story, but confirmed that Get Even will get some kind of story reveal in due time. Of course, all of these neat mechanics and concepts should ideally be be housed within a sound setting and plot, but the promise of two intertwined campaigns and their reality-bending motifs definitely gets the mind working. Indeed, he wants you to think about many things when playing the game or assessing its rules, just like you may have done the first time you watched The Matrix. Questioning what it means to be real is very much the focus here.

Quite exactly who Get Even's protagonists are remains to be seen, and their reasons for transcending realities isn't quite clear, but it's refreshing to encounter a shooter that doesn't just deal with another foreign army triggering an incoherent modern war you honestly couldn't give two shits about. As long as The Farm 51 makes good on its concept by backing it up with a solid premise and gameplay to match, it should go down well within the shooter pack.

Get Even is coming to PC and next-gen consoles in 2015. Are you intrigued by the concept? Let us know below.