Electronic Arts has won what has to be the worst Guinness World Record.

The game publisher has received the 2020 Guinness World Record for most downvoted Reddit comment following its controversial comment on Star Wars Battlefront 2's lootboxes made to the site. This impressive feat was spotted in the Guinness World Records by Reddit user -amsha-.

"The intent is to provide players with a sense of pride and accomplishment for unlocking different heroes," wrote a member of the EA Community Team in response to a Reddit thread created by one Battlefront 2 player who reportedly paid $80 in lootboxes only to have the character of Darth Vader locked from them.

"As for cost, we selected initial values based upon data from the Open Beta and other adjustments made to milestone rewards before launch," the post continues. "Among other things, we're looking at average per-player credit earn rates on a daily basis, and we'll be making constant adjustments to ensure that players have challenges that are compelling, rewarding, and of course attainable via gameplay." 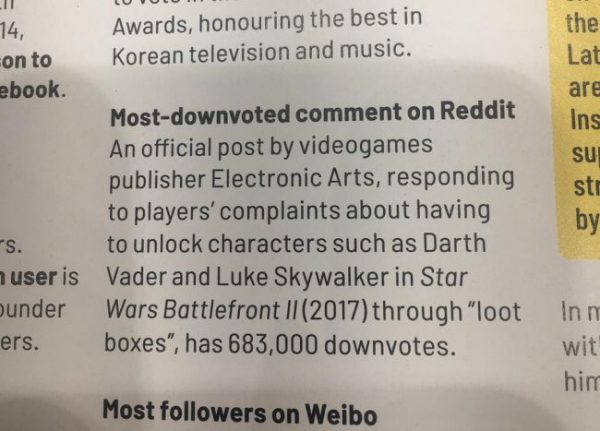 EA's comment became the pinnacle of 2017's lootbox fiasco. Loot boxes, which players purchase in-game to access random materials and Star Cards for classes and hero characters, were one of the primary methods of advancing in the game. As such, many felt as if the progression system was designed to encourage players to buy their way up and some also noted its relation to gambling.

Both Sweden and Belgium have investigated whether loot boxes constitute gambling. Likewise, in 2019 representatives from EA and Fortnite met with the UK Parliament’s Digital, Culture, Media, and Sport Committee to discuss its randomized purchases - which EA described not as loot boxes but rather "surprise mechanics".