Changes are coming to Nightfall Strikes in Destiny 2.

Destiny 2 players can expect an update to Nightfall Strikes in the the future, and these changes include scoring, challenges, and rewards.

The changes outlined for Nightfall are rather extensive, so buckle up Guardians, you're in for a bit of a long read.

Nightfall scoring and high score tracking was outlined in the Destiny 2 development roadmap released last week, which also mentioned rewards. Unique rewards for Nightfall Strikes is one of the stretch goals, which Bungie notes could slip from the estimated February 27 release date.

According to Bungie, the Nightfall has been the subject of "a lot of feedback since launch," and many players felt the timer was "pretty stressful." Many expressed they wished to slowly work through the challenges at their own pace. This will be addressed with upcoming changes, said the studio. 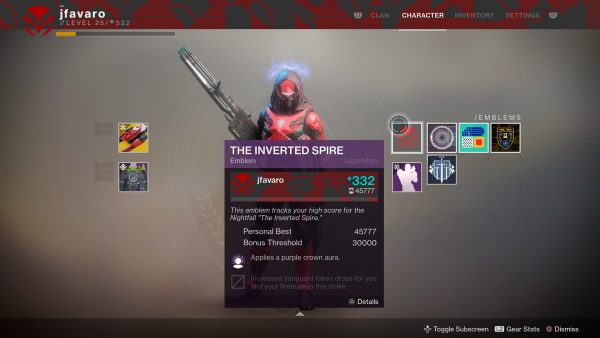 Bungie's vision for Nightfall, is that it be challenging but still allow players to determine their own challenge level. This way, players could go "slow and steady" or as fast as they wish, and there would be elective modifiers for veterans.

Fireteams of all sizes and solo players should be able to participate, and a player's final score should separate "the best from the rest," as high risk comes high reward.

This would also mean each boss would drop a "very rare and powerful unique item," so Nightfall players can shows off achievements with new "dynamic emblems and exclusive auras." Players will see this new direction for Nightfall in the next Destiny 2 patch, with more being added over time.

Part of the aforementioned vision is to also enhance Nightfall Strikes with sandbox improvements. The weekly Nightfall, especially on the Prestige difficulty, was hampered by the time limit mechanic with its pass-fail mechanism.

Because it only "acknowledges success as being a clear," with no degrees of success past that point, competition doesn't exists in that space. This turned people off of Nightfall due to basing performance solely on speed, according to Bungie.

Due to this, the team is re-positioning strike scoring in Destiny 2 to ensure the following:

How the updated mechanics will work: 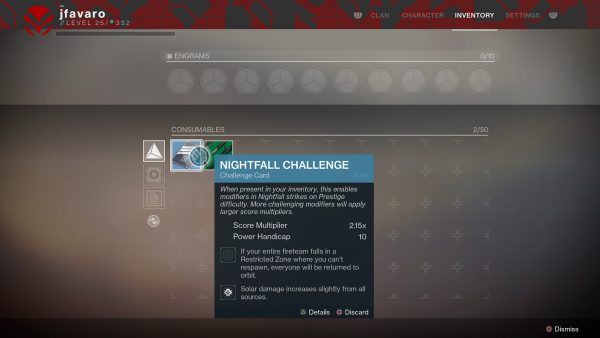 Along with the aforementioned are Challenge Cards, which will offer players a way to "boost the challenge in exchange for score multipliers."

With update 1.1.3 on February 27, there will be a challenge card that drops from completing a Nightfall run. It has some customization options to help tune the challenge level to what the player and Fireteam are capable of.

Players will be able to all scores on new Nightfall Emblems available as drops in each Nightfall strike. These emblems and others like them are now the source of Auras, which are automatically enabled if the personal score is above a global threshold.

At first, the thresholds will be set based on what Bungies thinks might be tough for players to reach, but this will change based on community scores.

Along with the Aura, a personal score over "the threshold will also unlock a Fireteam-wide buff." This will boost Vanguard Token drops in that strike by 25%. When the Nightfall Aura hovers above a players head, this allows others on the Fireteam to know who is providing the added percentage. 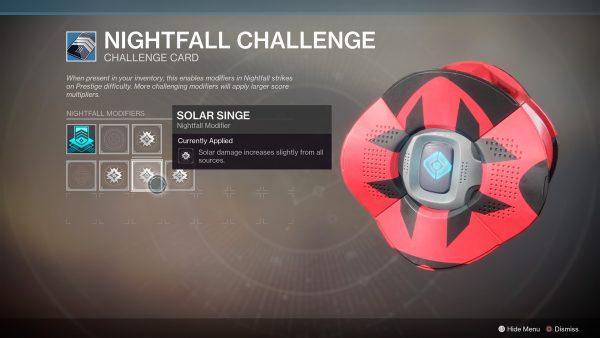 Rarer variants of the Nightfall Emblems will also be available as drops at higher score thresholds. Obtaining these rewards will be a challenge, so not everyone will earn these scores or collect the items.

That said, while update 1.1.3 will have a first pass on these features, future updates will react to player input, as well as add more rewards and "recognition to posting competitive scores."

Challenge Cards may also be extended to support more "difficulty customization and deepen the scoring options."

Got all that? Hopefully you do, because Bungie also went into more detail on the Nightfall modifiers in Prestige mode.

Because the current Nightfall climate in Destiny 2 encourages player to go through encounters as fast as possible, as mentioned above, scoring will help change things. At present, players focus on extending bonus timers, and skipping encounters unless required, which leads to less fun and more stress.

With the upcoming changes to Nightfall, the modifiers will apply a multiplier the player's score in Prestige. Players will lose points though, which mean the player will need to keep moving. The multiplier will be reduced if a player takes too long in the session. 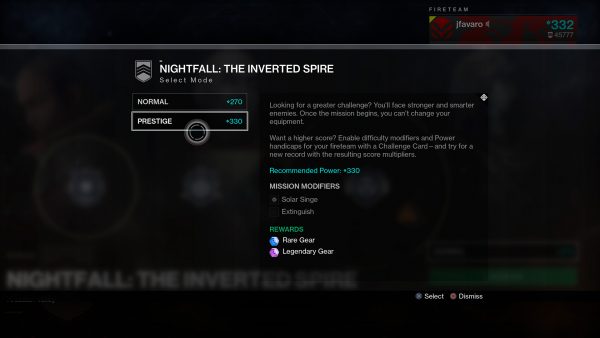 The first iteration of the Nightfall modifiers changes will include the following:

In summary, Destiny 2 players who prefer getting through the Nightfall as fast as possible will be rewarded with a higher score. Those who prefer to go the solo route with a more leisurely pace will lose points, but still finish the activity and collect a reward.

Again, the first wave of Nightfall changes will appear in Destiny 2 update 1.1.3 on February 27.