Yes, you read that correctly - Dante is apparently mad for fancy Greek yogurt.

The original Dante, that is. The commercial in question is actually a few years old, but it recently resurfaced over on ResetEra, where gamers are congregating to discuss all things Dante and dairy as we speak. I, too, am now in the mood for some yogurt. Check out Devil May Cry's new fermented milk shill below.

"Simplicity tastes better," says Dante, or as some people know him, Drew Coombs. If you actually watch the commercial, which is only 15 seconds long, you'll see that it's pretty wild. It features a guy diving into a lake next to some sort of milk splash. I'm not quite sure what's going on, but I am interested.

"I really want to see Drew Coombs come back as Dante one day," writes a poster on ResetEra. "Maybe if Kamiya does that DMC x Bayonetta game he's always quasi-joking about."

"Until then, I'll have to stick to Drew's yogurt smooth baritone on YouTube. I wonder where I'll hear him next. Maybe in a pea soup commercial. We know a remote farm in Lincolnshire, where Mrs. Buckley lives..." 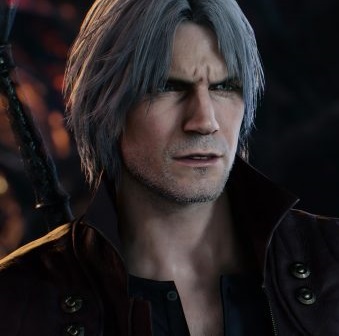 Although they're a Coombs diehard at heart, said poster also reckons Reuben Langdon is pretty great, despite a notable lack of yogurt-selling.

"I've always appreciated Reuben Langdon's performance as Dante," they write. "He's done a great deal for the character and the franchise. He was on GameFAQs prior to DMC3 coming out and took feedback about Dante's character and performance."

"A lot about Dante's character has been shaped by his performance. I can't imagine many other voices as a young Dante in DMC3. And he did a good job as an older, aloof more world-weary Dante in DMC5 as well. His ninja turtle uncle Dante in DMC4 is alright too."