Sony has confirmed it’s testing a movie and TV subscription service in Poland.

In a statement sent to GI.biz, Sony said PlayStation Plus subscribers in Poland will have access to Sony Pictures Entertainment content for a limited time through PlayStation Plus Video Pass.

It’s possible Sony is about to announce a new video service called PlayStation Plus Video Pass.

According to a report from VGC, on the company’s Polish website, a listing along with a logo appeared for PlayStation Plus Video Pass.

The description stated the service is “a new benefit” available for a limited time on PlayStation Plus. The trial service dates were listed as April 22, 2021, to April 22, 2022, and it will be made available to all PS Plus users in Poland.

The listing was eventually removed but featured promo images for Sony movies such as Bloodshot, Venom, and Zombieland: Double Tap. 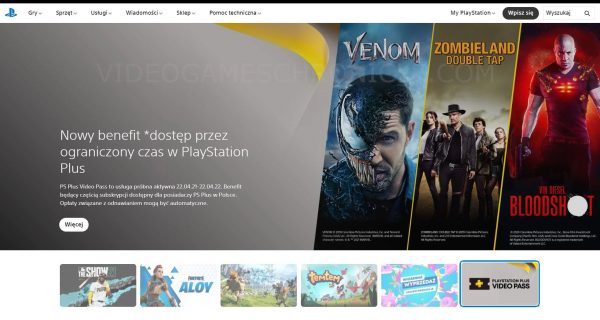 Back in March, Sony announced it will be closing down the film and TV show sections of its PlayStation Store. Come August 31, PlayStation users will no longer be able to buy or rent films or television series from the platform. Any content already purchased will still be available.

So it’s possible, this new service is one of the reasons Sony is shutting down the ability to purchase media from the PS Store.

We’ll update this post if more information becomes available or the news is confirmed by Sony.