2016 was the year when it all went wrong. Draw your own conclusions as to why, but the global political direction starting that year left Ragnar Tørnquist and his team at Norwegian game studio Red Thread feeling disenchanted.

“Being a game developer right now, you feel like ‘what the fuck are we doing?'” says Tørnquist. “We’re writing and talking and making games [but] we feel kind of helpless and powerless and insignificant – a feeling of frivolity or pointlessness. I felt very strongly that I want to keep making games, but I also want the games to mean something and maybe have a positive social impact, as much as that is possible, but also without being preachy.”

Enter, then, Dustborn. The recently revealed title, which debuted at the Future Games Show, is set in a fictionalised America, gripped by fascism, divided by weaponised disinformation, and torn between the rival factions of oppressive Puritans and authoritarian Justice. Draw your own conclusions there, too.

Caught in the middle is Pax – a Black, pregnant young woman, trying to survive a road trip across the Divided States of America to deliver a mysterious package, with only her misfit bandmates and the robot that drives their tour bus to rely on. Pax has an edge in evading the Puritans and Justice though – she’s ‘Anomal’, gifted with power over language itself. Thematically, it’s a fitting transition for a developer known for its character-centric and dialogue heavy games.

The reveal trailer shows only some early, basic examples of Pax using her powers, which at a glance makes it appear as little more than a sonic blast, akin to the X-Men’s Banshee blasting enemies away. However, her abilities are set to play with the idea of how words themselves can be weaponised, having a physical effect on the world as much as they can be used to manipulate or misinform – something Red Thread wants players to really reflect on as they journey across this broken America.

Players will have access to a “lingual arsenal”, allowing them to wield words and phrases against people they encounter, both enemy and ally. You might physically attack or mentally confuse a Justice agent as easily as you subtly coerce a bandmate into using their own unique powers or skills. The point, Tørnquist says, should be to consider “at what point does that sort of create a moral quandary for you”. 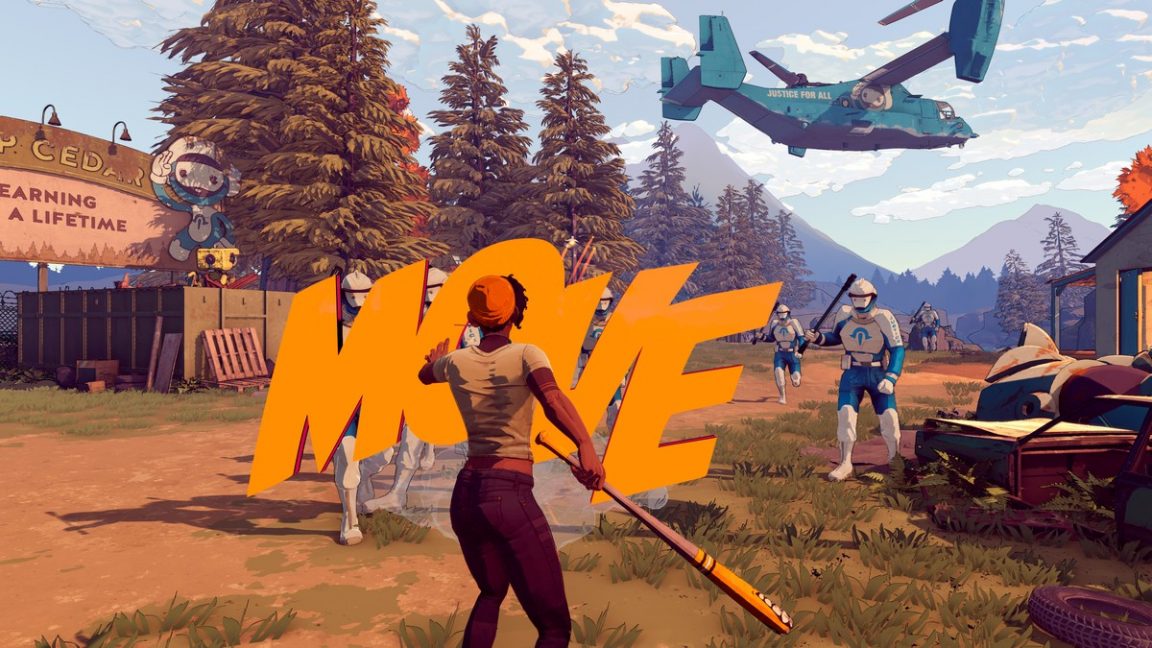 Part of building that arsenal will be a system the devs are calling ‘Wordcraft’, which, per Tørnquist, “on a very high level means an ability to basically record and remix disinformation, and then use that again to craft new words, new sentences, that you can use both in dialogues and in combat. That’s an important part of the game, and an important aspect of that is figuring out how these words work on different people.”

Dustborn will be Red Thread’s first action-oriented game. When the studio was founded, it was with a view of creating narrative adventures, first with Dreamfall Chapters, continuing the story of 1999’s The Longest Journey and 2006’s Dreamfall – which Tørnquist had written and directed at Funcom – and then with 2019’s Draugen. While those titles had some elements of action to them, they would typically be scripted events – here, the action is integral.

“Our roadmap has been ‘we want to tell stories, but we want to keep doing it in new ways,” says Tørnquist. “With Dustborn, we asked ourselves, ‘how can we take what we learned during Dreamfall and Draugen, and do something different?’ This story, which was there from the very start of this road trip, it felt much more dangerous. I mean, both Dreamfall and Draugen had danger, but it was often more sort of a psychological or interpersonal threat, while Dustborn is about the external threat, of you being the hunted.”

As a result, Dustborn aims to explore how storytelling, dialogue, and language can be directly used in combat, rather than merely occurring alongside it. 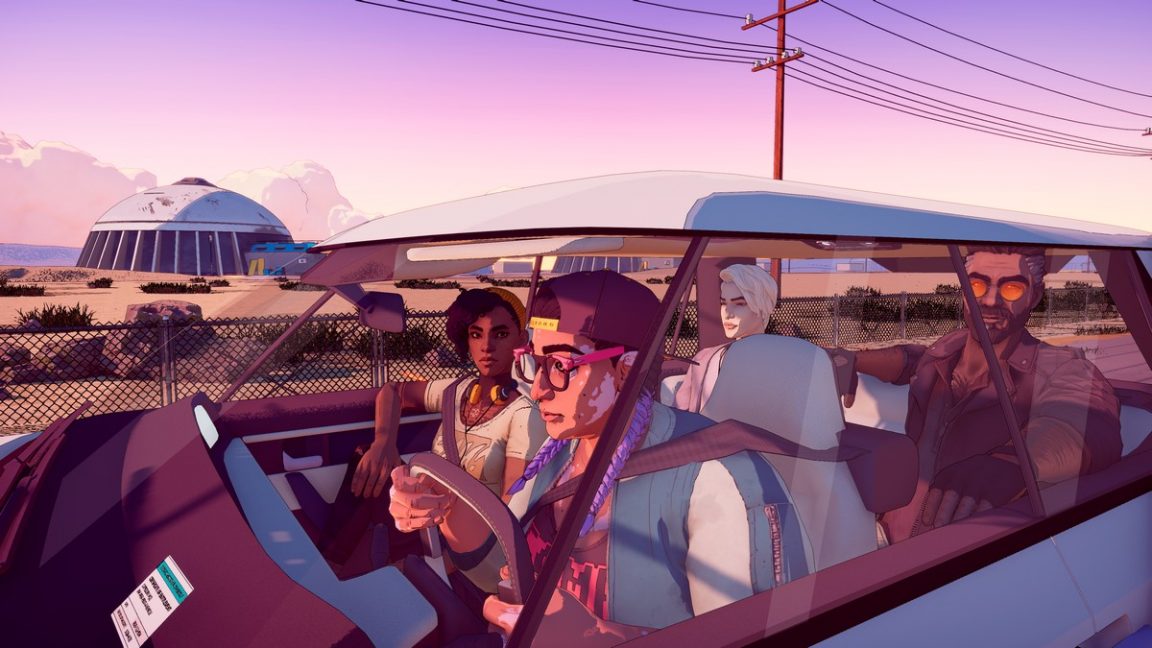 “I think in a lot of games, combat is its own thing, it exists separate from storytelling,” explains Tørnquist, “which is kind of odd, because in the best action movies, the action is tied to the story. We wanted to include dialogue in combat in a way that we haven’t seen before. That sort of goes back to weaponised words – how the dialogue system [will be] used in combat is something that not a lot of games have done. Basically, we’re trying out combat but it’s gonna be from our perspective, sort of a Red Thread view of interactive storytelling.”

Despite Dustborn having been in the works for just over three years now, the timing of its announcement meant it landed right in the middle of the Black Lives Matter protests, and against a backdrop of continuing real-life political corruption that doesn’t feel too far removed from the game’s alternate universe.

“We actually delayed the announcement of Dustborn because of what’s happening,” says Tørnquist. “Both because of the virus and then, of course, BLM, we felt like we do not want to come across like we’re trying to tap into the zeitgeist or trying to sort of exploit the situation.”

That said, the game is unabashedly proud of its politics and its commitment to representation. Beyond being fronted by a Black woman, the game features a mix of LGBTQ+ people (early screens also indicate Pax has two moms), different body types, age variance, ethnic diversity, and – perhaps most importantly as a band – different musical tastes. Pax’s pregnancy will also be a major part of both the story and the gameplay, but Tørnquist is staying tight-lipped on how, for now. 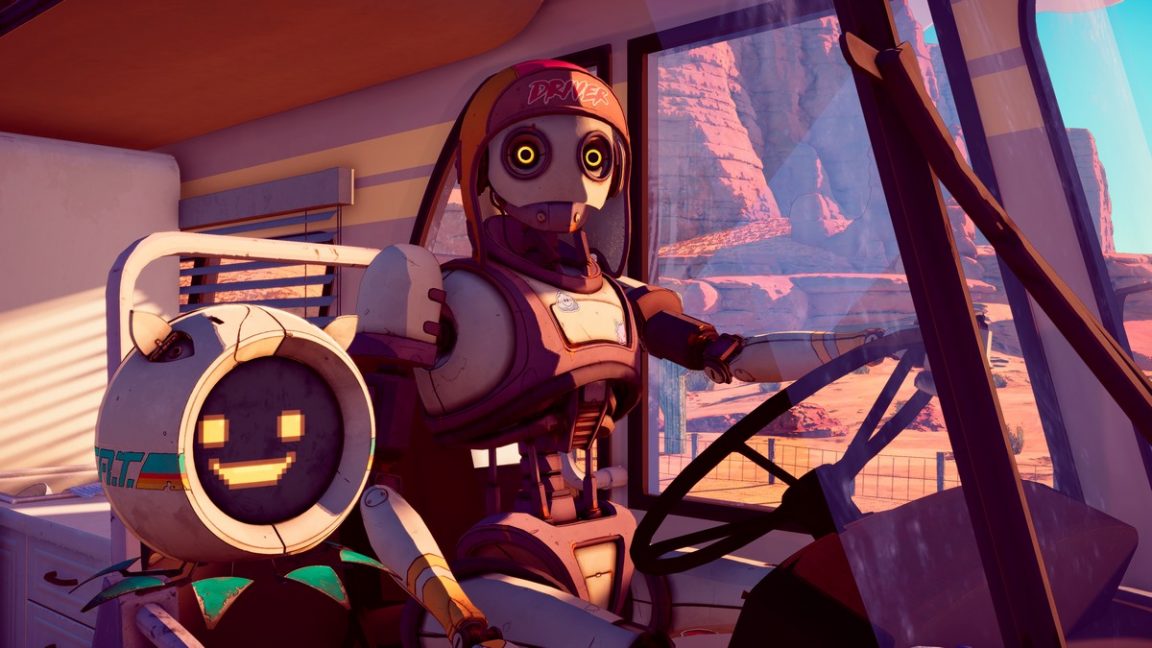 The studio is, however, keenly aware of the optics of being a Norwegian studio working on a game with a diverse cast, set in America. While Norway is “more diverse than people think”, Tørnquist acknowledges that the dev team is “not particularly diverse” at present, but is actively aiming to improve the level of input and representation behind the scenes, “especially on the writing side”. As production on the game moves from the broader plot – the game’s skeletal structure of what happens, when, to whom, and why – Tørnquist aims to bring in more talent from Black and minority backgrounds to flesh out the characters and how they would act.

“We’re not gonna complete that without working with people who have a personal experience from at least some of our characters’ points of view,” Tørnquist says. “I want to say I’m specifically looking for writers who are Black and female, in order to really explore the background of the main character.”

One of the more interesting aspects of Dustborn’s world is that the fascistic forces Pax will be trying to avoid, Justice and the Puritans, aren’t as predictable as you might expect. While they’re very clearly the “bad guys”, they’re not one-dimensional cannon fodder. 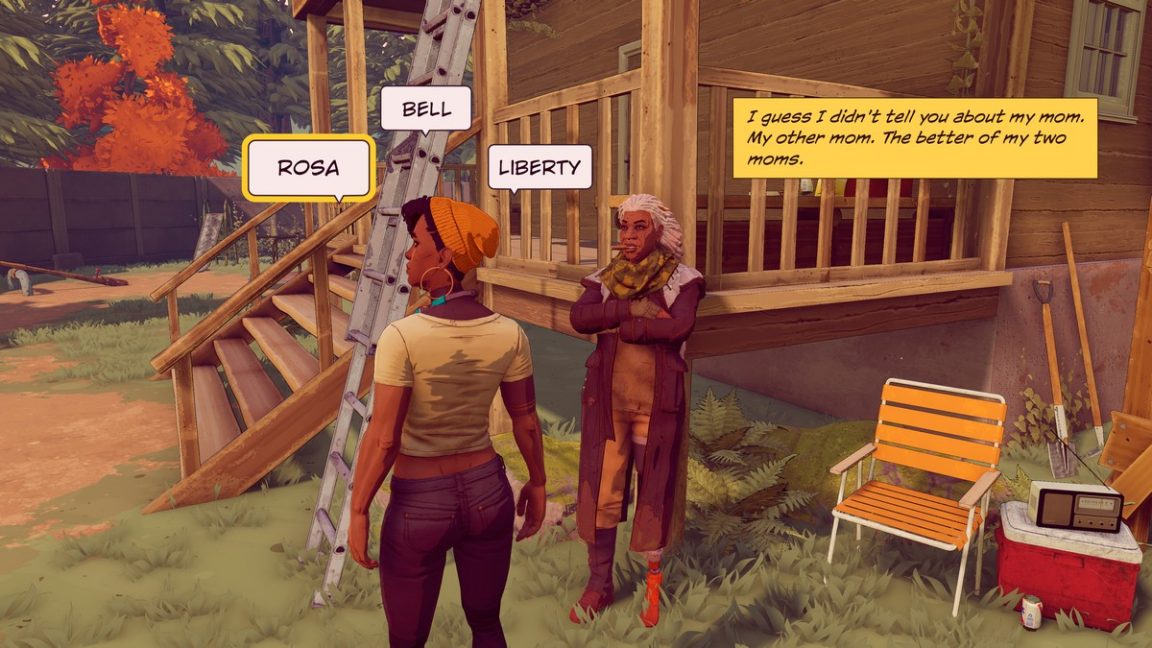 “Justice was started as a positive force [which] happens with a lot of authoritarian regimes – the whole law and order thing, bringing justice to the people,” Tørnquist explains. “It seems like such a positive idea but of course it’s all about who controls it. With Justice, we’re going into our idea of policing and the inherent danger in giving people that power but putting a different face on it, because I think that’s easier to talk about these themes with a fictional force that marries and reflects reality.”

The Puritans, meanwhile, are almost the exact opposite of their namesakes – rather than the brand of religious obsession the title conjures, they’re actually technocrats.

“They are what would happen to Google, Apple, Tesla, Facebook, if the apocalypse happened,” says Tørnquist. “It all ties into the idea of propaganda, words, disinformation, and things like that. That’s something that’s super interesting to me – these sort of puritanical technocrats believing that technology and information is the solution to everything. These sort of idealistic [views] that have proven to be incredibly dangerous and corrosive to society, we give a face to that.”

Perhaps more interesting is that Red Thread isn’t looking to dodge the overt political points it’s raising with the game. It’s all too familiar to see developers tap into political themes, but then claim objectivity or that it’s for players to interpret their meaning. With Dustborn, Red Thread is taking a firm stance that the authoritarianism and oppression of its warring enemy factions are bad, actually. 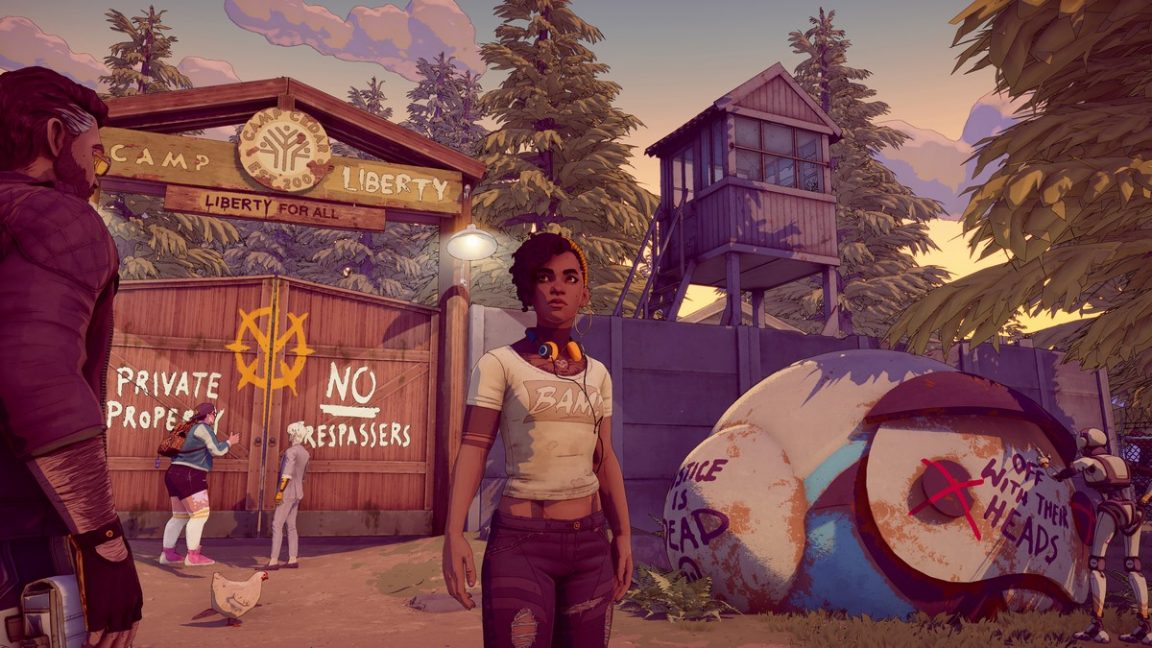 “We have a point of view with this game,” Tørnquist says. “We’re not stepping back and saying ‘you figure it out’. We’re actually saying, ‘No, fascism is bad’ – but we are also going to let our characters argue about it.”

While Tørnquist is aware that the game’s mix of diverse representation and political ideology will lead to accusations of “virtue signalling”, he’s also adamant that “we are making a statement with the game. Our cast is our cast for a reason, our setting is our setting for a reason. These are things we believe in, but it’s also a game about a multitude of themes.”

While Red Thread is planning to flesh out its new world on the run up to the game’s 2021 release – a comic is set to reveal more details, and Tørnquist says his team has “a pretty extensive backstory that I hope we can explore” – the clearest theme of Dustborn may be that of unity in the face of growing oppression. As the game’s slogan says: “There is no hope, except for us.”