According to another listing by the USPTO, the reason the February trademark was abandoned is because EA filed for another one in June this year.

Apparently, the publisher filed for a renewal of the original trademark.

A report on GamesRadar earlier today pointed toward a lapsed trademark filing for Skate, leaving many of us sad that a Skate 4 may not be in our future.

Luckily, EA is keeping its trademark alive which means we have hope for a new entry once again. 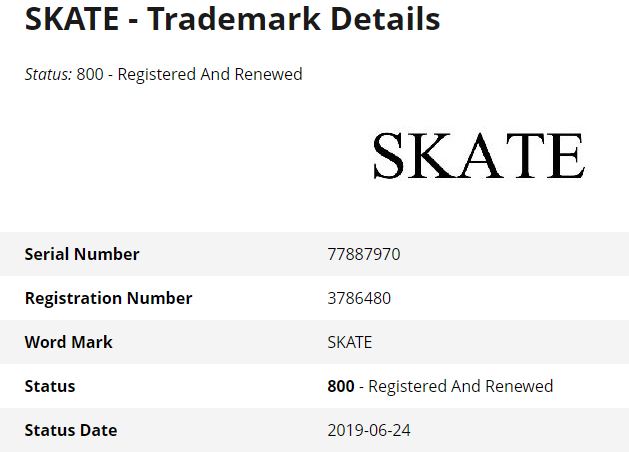 Electronic Arts has abandoned its trademark for Skate, leaving little hope for a Skate 4.

According to a United States Patent and Trademark Office (UPTO) listing, the trademark was re-upped in February 16, 2018. However, as of August 1, 2019, the company had abandoned it. A trademark can be considered abandoned when the applicant refuses to respond to correspondence from the USPTO.

If you look over the trademark page on legal resource site Justia (thanks, GamesRadar), you can see the application history and the various attempts made to contact EA over the filing.

Despite hopes for a fourth installment, EA said in a Q3 2017 financial call to investors Skate 4 was not in development.

Rumors around E3 2018 stated EA might announce the game at EA Play, but the rumors obviously didn’t pan out.