Pillars of Eternity II: Deadfire, within the first couple of hours, contains the phrase “Cannon-fucking your boat to sodden splinters.” Pirates might not make everything better – you wouldn’t invite them to a booze-free wedding – but they’ve done wonders in Obsidian’s RPG sequel.

Deadfire continues the misadventures of the Watcher of Caed Nua, along with pals old and new, as they once again deal with tricky deities, cults, and political upheaval. Instead of investigating a mystical affliction, this time the gang are hot on the heels of Eothas, a reawakened god now wandering around in a massive stolen statue. Typical!

It’s another world-shattering crisis, surrounded by several others. While it’s just as happy to toss mind-bogglingly epic obstacles in your way as its predecessor, along with plenty of theological and moral debates, it’s also a game about foul-mouthed sea dogs, bad jokes, and wearing tricorn hats.

However, it’s not just a change in tone; after surviving a shipwreck and the prologue, you’re free to take off in your ship and chart your own course. The result is a more sandbox-like affair, and one with a large scope, where quests send you all over the peninsula, starting in dingy taverns and usually ending in some forgotten jungle or ominous ruin on the other side of the ocean. 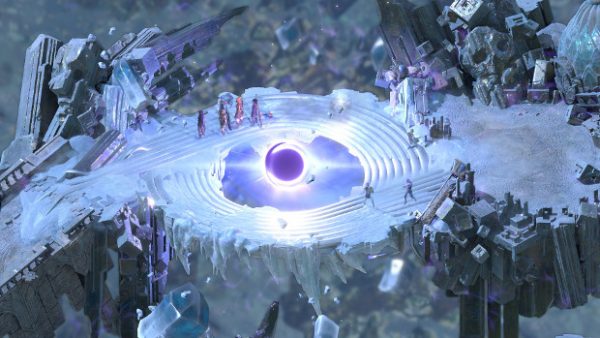 While Deadfire offers up a lot of freedom, it’s simultaneously more focused than the first game. You’ve got a clear objective from the get-go: find Eothas and get back your soul, which he pinched when he possessed your statue and stood on you. It evolves into something considerably more complicated as your learn why Eothas is seemingly kick-starting the end of days, but it centres the game and connects its disparate threads.

See, Eothas’ journey across the ocean has pushed the region one step closer to chaos, and it was already on the edge. You’ve got the locals, the Huana, trying to reassert their authority; two heavily-armed foreign trading companies vying for control, for very different reasons; a pirate faction that’s rapidly being split down the middle, transforming into two distinct groups; and then a motley assortment of wizards, religions, and squabbling organisations.

A faction system itself isn’t novel, but few can boast such an elaborate network of vendettas and alliances. Straightforward, it is not. Ostensibly the point is to make powerful friends who will help you reach Eothas, but you’re also determining the fate of the whole area, and it goes far beyond helping one faction ‘win’.

Few quests take place in a vacuum. You might, for instance, be tasked with helping a faction get up to no good, only to discover that several other factions, big and small, are also involved, each with their own objectives and motivations that overlap and conflict. Suddenly it goes from a binary help or hinder choice to something that will affect all these different powerful groups, echoing across multiple quests. 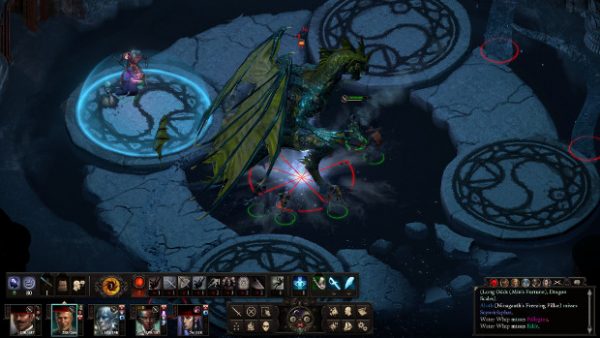 Importantly, most interactions with factions – or, indeed, most NPCs – consider the context. Deadfire lets you play the field right up until the point of no return, prior to the final quest, but it manages to avoid the narrative dissonance that comes from helping everyone, regardless of their motivations.

There’s always an acknowledgement that there could be many different reasons why you might want to help someone, and Deadfire tries to support that through dialogue choices. If you’re playing as a morally-deficient pirate, as I was, you might be able to justify doing something seemingly kind by following it up with a bit of blackmail. Or while doing quests for opposing groups, you can play the part of a spy, feeding the other information.

This all goes a long way to making Deadfire feel more cohesive and logical, though that’s not somewhere the game appears to need much help. There’s world-building on every corner, reiterated and built on, heaping context and flavour onto every quest, intertwining them so that even when you’ve got a journal that’s overflowing, you can be sure that a lot of it is connected.

Running alongside the hunt for Eothas is a story of identity. It’s not always overt, but almost every companion has an internal struggle relating to it, while the Watcher’s journey itself poses questions about how experiences shape people. It elegantly ties the narrative to the mechanics of character progression, making a lot of the myriad stats and reputation meters less abstract. 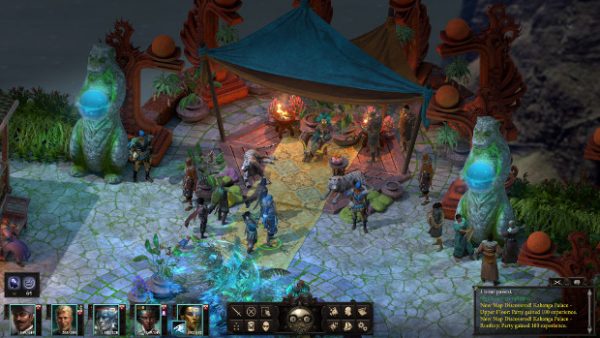 While things like character traits – cruel, benevolent, shady, and so on – existed in the first game, you’ll see them changing how NPCs react to you a lot more often now, frequently without you needing to even say a word. If you have a reputation for being aggressive, an NPC might give you everything you want without you having to actually select an aggressive dialogue option. The result is that your reputation and personality aren’t simply dialogue tools used to win a game of verbal sparring, but these organic and sometimes unpredictable things.

This is similarly used to give companion characters an extra dose of agency. They, too, have traits, though they’re different from the Watcher’s. Everyone’s best bud, Edér, doesn’t take kindly to people being anti-Eothas, while sharpshooter and bird-lover Maia appreciates a good joke and people who take duty seriously. When you’re talking to an NPC or another companion, everyone in your party might react to the conversation, sometimes chiming in, getting into fights or simply raising an eyebrow at a bawdy gag.

The player is still the axis on which the companions spin, but they can strike up friendships, start arguments, and get in chats entirely independent of the Watcher. It’s a significant upgrade to the companion banter and leads to considerably more meaningful exchanges between party members, which you can choose to get involved in or just watch from the sidelines. Ultimately it feels more like a tabletop adventuring party, full of squabbling, opinionated friends.

This reactivity does threaten to occasionally get in its own way, however. After 50 hours you’re going to be really sick of seeing “Edér shrugs”, “Serafen strokes his beard” and countless variants to denote their reaction to a conversation you’re having in earshot. It’s also pretty easy to get traits that don’t really reflect your character, though they’re prioritised so people will notice if your favourite hobbies are ‘looting plague ships’ and ‘making sarcastic remarks at funerals’. 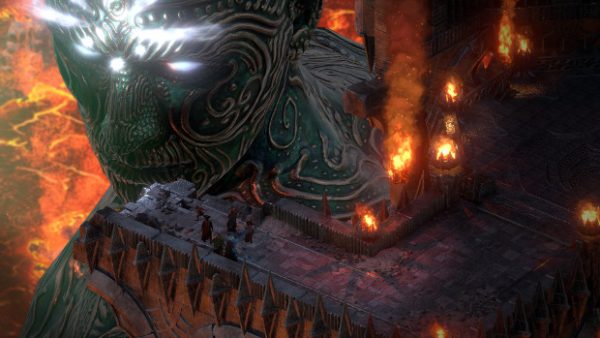 Looting ships is definitely more my mug of grog than fighting them. Even if you decide not to start a life of piracy, the sea’s a hostile place and you’ll inevitably run into someone wanting to sink you. Ship battles play out a little like the text adventure vignettes you’ll see throughout the game. You get big, descriptive chunks of flavour text, some illustrations, and a few options on how to proceed. They’re usually brief precursors to something exciting, like entering some flashy dungeon or clambering up an imposing cliff to reach a dead city, but not in the ship fights.

Naval combat largely boils down to turning around constantly and firing cannons. You can command the ship to go faster, slow down, turn, and fire, and you can reassign your crew to deal with injuries and ship damage, but mostly you’ll be selecting the same two things over and over again until your target sinks, which it invariably does because the AI isn’t very good at the whole sailing malarkey. Even with all the ship customisation I did, from hiring new crews to buying new cannons, I hardly ever felt the need to change my tactics. It’s functional, I guess, but that’s worlds away from fun.

You can mix it up by boarding an enemy ship, at least, giving you control of your party as you fight the other crew in a real-time scrap. The limited space means they can quickly devolve into a bit of a mess, but it’s still better than slowly firing cannons. Initially the combat system isn’t dramatically different from the previous game, but it grows into something considerably more excessive. And silly. Want to dual-wield flintlock pistols? You can do that now. And wands, if that’s your thing. You can use more weapons, combine classes, summon apocalyptic storms, and one of your pals can turn into a shark. A sexy shark, to boot! It’s great.

Expect to do a lot of tinkering with builds, especially if you pick a multiclass for you or your companions. Multiclassing lets you combine two classes or subclasses with only one restriction: you won’t get access to the last two ability tiers. Don’t worry about that, though, because you won’t see them for most of the game. By the time it matters, you’ll already have more devastatingly powerful abilities than you’ll need. The extra options do mean there are more ways to make a useless character, but respeccing is available early on, while the default difficulty is unexpectedly generous. If you want a challenge more akin to Pillars of Eternity’s classic difficulty, I recommend cranking it up a notch. 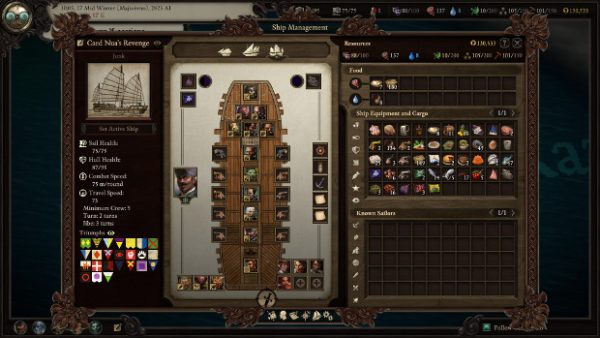 Deadfire remains a brilliant pirate (or privateer) RPG despite the dismal ship-on-ship brawls. It hits all the tropes – buried treasure, jungle expeditions, ghost ships – but it’s the crew that really sells it. You can hire new crew members at every port, each coming with their own name and background, and much like yourself, they make a habit of getting up to shenanigans.

You might find some of your sailors planning a robbery in town, or gambling on deck, letting you get embroiled in their capers. They don’t always get on, either. I had to break up a fight between one of my more unusual employees, a bug guy and his non-bug colleagues. He was about to throw one of them overboard, which would have really put a damper on our treasure-hunting trip. I had to threaten to throw them all overboard if they didn’t get back to work.

These little asides make the crew more than a resource, so much so that I swore never to ram another ship again after almost half of them ended up near death when I collided with a galleon. Also, it pays to keep them happy, or else you might have a mutiny on your hands. Heavy is the head that wears the really awesome tricorn hat with the giant feather in it.

While the ship is effectively a stronghold, it’s not just Caed Nua – your previous one – with sails. Whether it’s Mass Effect’s Normandy or Baldur’s Gate 2’s myriad strongholds, these RPG bases often feel set apart from the rest of the game; places that you visit between adventures to do some housekeeping. You’re not really running them. Here, your ship goes everywhere you do, and you actually need to manage it, buying rations and looking after your rascally pirates. It’s characteristic of the rest of the game, where familiar features have been completely reconsidered.

Deadfire isn’t the spiritual successor of anything, and it’s not trying to recapture the magic of the Infinity Engine games. That’s been done already, giving this second act room to be bolder. Free from those expectations, it’s forward-facing and blessed with a lively, vital setting that blows the comparatively dry, erm, Dyrwood out of the water. It’s a confident sequel, then, and does enough work to fill in the gaps through discreet bits of exposition that it could probably be enjoyed as a standalone adventure, too.