Nintendo has patched out a victory gesture in Mario Kart 8 Deluxe which is considered offensive in some countries. 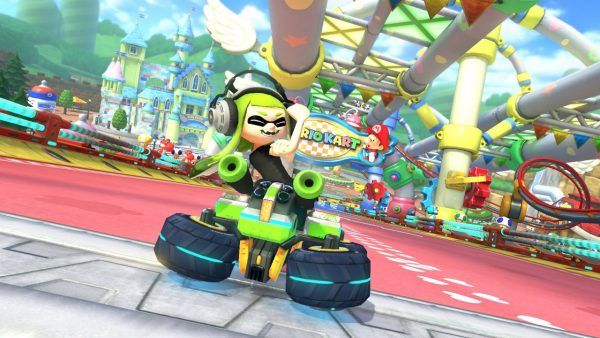 The celebratory gesture was made by Inkling Girl in Mario Kart 8 Deluxe, and while the pose isn’t seen as an offense in Japan – or the UK – it is in several other countries.

Now, instead of having her arm at 90° making a fist, and her other hand laying across her bicep, the arm is just bent up. No other hand in use.

Known as the “Italian Salute” here in the states to some, you can pretty much see how it is performed looking at the image above from NeoGAF user Neiteio. Or here if you want a live demonstration.

Again, not offensive in Japan, but it is in France, Georgia, Italy, Latin America, Portugal, Spain and others. Some countries use it has the equivalent of the middle-finger, or an insult to one’s mother. The Wikipedia link there provides a list of the various meanings of the gesture.

It’s offensive as well in the US, but has gone out of fashion unless you’re ancient (cough, cough). People prefer the finger over here, as you don’t have to take your hand off the steering wheel to perform the “up your ass” (“up yours!”) action.

The full patch notes have been posted by Nintendo and we’ve added them below.

Nintendo announced ahead of the NPDs yesterday Mario Kart 8 Deluxe was the best-selling game for the month of April in the US.