It’s time for another Double GTA$ and RP week for GTA Online players. 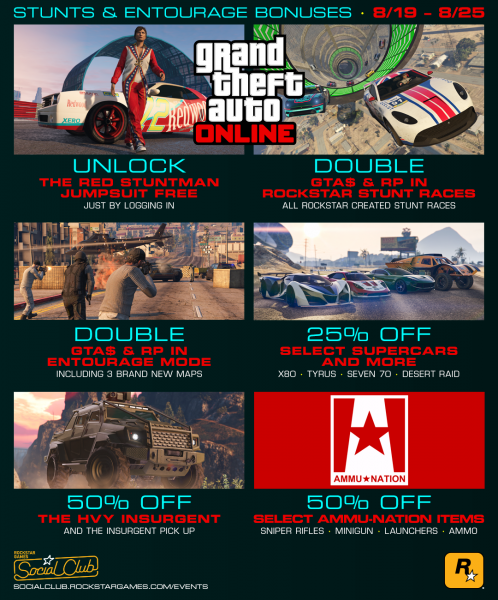 Those participating in Rockstar-created Stunt Races will also earn double, and you can perform your Cunning Stunts in style with the Red Stuntman Jumpsuit which is earned just for logging in.

Select vehicles and ammo are on discount for the next week, with 25% off the Grotti X80 Proto, Dewbauchee Seven-70, Progen Tyrus and Vapid Desert Raid. Players can grab the HVY Insurgents at 50% off and the Heist completion prerequisite has been temporarily waived.

Sniper Rifles, Miniguns, Launchers and ammo are also on sale at 50% off.

This week the Premium Stunt Race is Plummet, and it’s for Supercars only. As with the others, win place and show offer different payouts and it costs GTA$20K to enter.

First place earns GTA$100K, second gets GTA$30K and third gets GTA$20K. Even if players don’t hit the board, they are guaranteed Triple RP.