Ever wonder how long it would take for you to finish all the games you have accumulated in your Steam Library? So has someone else. If you head over to the site SteamLeft and enter your user name in the box, you will be given an estimated on how long it would take to finish all of these games.

There is the option to log into your Steam account on the page, but I don’t personally recommend doing that – and I am sure your wouldn’t anyway. As long as your profile is public, the generator will pull the information just from your profile name.

Your mileage may vary, depending on how many games you purchased through the service, through keys or physical copies.

The site even provides examples of what you could do with time instead of playing Steam games, such as ride on the Titantic’s maiden voyage 100 or so times – which would be impossible considering it sank on its first outing.

For fun, I posted some of mine below.

Note that I don’t have very many titles in my Steam library on this particular account, so the hours aren’t as high as you would think. 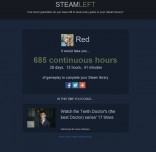 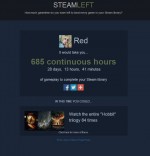