Keza MacDonald was one of the first journalists in the world to get hands-on time with WiiU, Nintendo’s next console, at E3 this morning. We have shots and impressions inside.

Streams games to a 6.2” touchscreen controller

Compatible with all Wii hardware

I KNEW it wasn’t going to be a GameCube controller with a touchscreen smacked down in the middle. I knew it. When Nintendo unveiled Project Cafe this morning, it still managed to surprise everyone, despite the months of supposed leaks, rumours and speculation. Just after the press conference finished, I headed into a back-room to get my hands on the new controller and test out Nintendo’s demo software.

As Reggie took great pains to point out in the presentation, these aren’t games. They aren’t even demos of games in development. They’re demonstrations of what the Wii U can do. The only disappointment in Nintendo’s press conference was the lack of any first-party games announced for the new console (and, indeed, the lack of a true third-party big hitter). That’s information that we’ll be drip-fed in the year to come –  I wouldn’t be at all surprised if next year’s Nintendo presentation focusses on a launch-line up, giving us ample time to digest the implications of the tech.

The first thing you notice about the Wii U controller is how incredibly light it is – far lighter than an iPad. It’s really surprising when you pick up it. That 6.5” screen is covered in plastic like a DS screen, not glass like an iPad screen, but it’s extremely clear, and the picture quality is just as good as on the larger HD TV screen in front of me.

To the touch, it feels more like a DS screen than anything else. It’s comfortable to hold, and your fingers easily find the two analogue sticks and the buttons. The console unit itself was hidden inside the pod, connected to the pad by a giant wire for the purposes of the demonstration. We’re told that the form of the console itself is still being decided upon, and the controller prototypes aren’t quite final.

This spaceship combat demo was easily the most impressive thing on the floor. Two players run around on the screen with Wii remotes, using the B button to blast away at a spaceship controlled by a third player using the Wii U controller.

If you’re the third player, you control the spaceship by tilting the controller, using the left analogue stick to strafe and the right to rotate and fly upwards or downwards. It’s a bit of a mind-fuck at first, but once you start really moving with the controller rather than twitching tentatively, it really works.

As the spaceship you’re both chasing the space-men on the ground with your own laser and trying to avoid their shots with skilful piloting. There’s absolutely no lag or interference between your movements on the small screen and where you appear to your opponents on the larger screen – this isn’t like those first Kinect demos, where the promise of the technology was rather obscured by lag.

It’s a tensely competitive little game, lasting just five minutes, but it shows the complexity and subtlety of control that the WiiU controller is capable of. This ain’t no Wiimote.

HD Experience is a passive demo that shows Link fighting a giant spider boss. On the screen we see Link walk through a church-like temple, using the analogue stick to control the camera and take in the lighting and level of detail. Then the boss emerges, and Link draws his sword for the fight. The scene then repeats at night-time, giving us the chance to see the differences in the scene.

Graphically, this equals anything we’ve seen on the current generation, and it knocks the Wii into a ditch and steps on its face. On the controller, there’s a crisp and clear map screen showing Link’s position and the direction he’s facing, but you can’t actually control anything with the touch screen. As a graphical tech demo, HD Experience impresses, but it’s not showing us much that we haven’t seen from other consoles – even if a Zelda that looks this good is enough to send fans into paroxysms of joy.

There’s not much to say about this except that it’s New Super Mario Bros, in HD, with Miis in little dungarees leaping alongside Mario. It looks lovely – as you’ll know if you’ve ever run them through an emulator on a high-end PC, most Wii games do look lovely in HD. Playing on the smaller screen is just the same as on the big screen, and you can use a combination of Wii remotes and Wii U controllers for multiplayer.

In this cute musical demo, a pirate on a boat orders his minions to shoot arrows at you, challenging you to use the Wii U controller as a shield and catch them. The cardboard cut-out pirate captain shouts out directions, and after two or three beats you raise the remote and block the arrows as they fly towards you.

It plays like a Rhythm Tengoku minigame – flicking your eyes between the two screens quickly feels natural, and the rhythm element adds a cute gameplay kick to what would otherwise be a very simplistic demo. I can imagine this tech being put to excellent use in a more robust Samurai Warriors/Dynasty Warriors-like adventure, where you use the buttons and analogues for movement and swords and move the controller for your shield – or even a firstperson combat game like Ryse.

This is a five-player chase game very reminiscent of Pac Man Vs on the Gamecube, which used the Game Boy Advance link cables to have one Pac Man on the Game Boy and three ghosts on the screen. That was also designed by Miyamoto, incidentally, whose experiments with GBA linking were surely a precursor to the Wii U.

On the screen as chasers, the screen is split into four, and you have to co-ordinate with each other to catch the fifth player, yelling out where he is in the arena when you see him. When you’re on the controller as the chase-ee, you see a top-down view of yourself on the left and a map of the whole arena on the right, showing where all the other players are and what direction they’re facing.

The experience changes hugely when you’re being chased rather than chasing, switching seamlessly between competition and co-operation. It’d make a hell of a good Mario Party minigame.

None of these demos except possibly Battle Mii could stand up as an actual game, but they’re designed to show off what the Wii U can do in a quick, easily understandable and digestible way, especially in multiplayer, so that’s to be expected. What they do show is how this controller could be put to use in other, larger games, and how it changes the way you think about what the controller actually is.

This is exciting technology, people. When someone starts showing some actual games, we can expect to be very impressed indeed.

For every detail on WiiU’s reveal today in LA, hit this. Full a Nintendo E3 press conference report, detailing 3DS and Wii announcements, hit this. 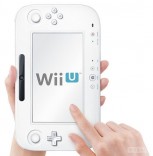