Twitch CEO Emmett Shear has been accused of laughing off reports of abuse on the platform after a number of users came forward with claims of mistreatment, cruelty and abuse.

A music streamer on Twitch who goes by the name of Starling openly tagged Shear in a tweet, suggesting the CEO had no intention of looking into abuse allegations.

"[Shear was] asked in an All Hands meeting about partners using their platforms to abuse women - specifically using my case as an example," wrote Starling. "He chuckled, said 'wow, the things that go on on our platform, can't really comment,' & moved on."

Starling goes on to note that interaction happened during a recorded meeting over a year ago, and Shear has yet to take action. "He didn't follow up, he didn't address it," wrote Starling. "This is Twitch culture. Sweep the ugly stuff under the rug for profit."

Starling's story is one of many from Twitch users claiming the platform failed to take action against affiliates who prey on and abuse others. Pokemon Go player Samantha Wong tweeted in response to a statement from Twitch saying: "These are empty words considering you, as a company, minimized and dismissed my sexual harassment and continued to let the predator attend your events and gave him live segments at E3 on your official channel." 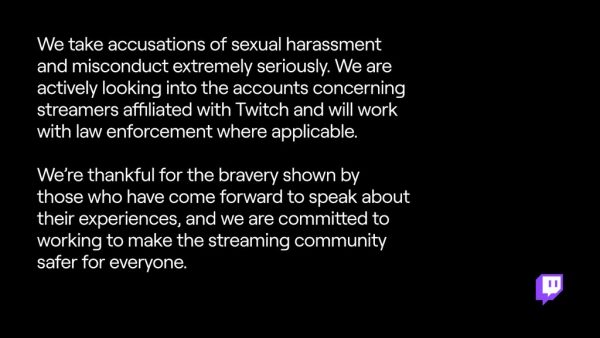 "I was a VP at Twitch and I reported this to the relationship-owning VP, the head of HR, and the CEO. All assured me it would be handled. Next year he was in the same VIP space at the same Twitch event. I was told he was the VP’s uncle and an 'important' initiative launch partner."

A document featuring reports from others who have experienced abuse in the streaming industry has been published on Medium. Victims are continuing to share their stories there, and further updates can be directed to Survivors-Streaming-Industry@protonmail.com.