Evo is one of those things you either already love or are yet to fully comprehend. Alex investigates the appeal of the world's largest fighting game celebration.

Played exclusively on PlayStation 3 (except Super Smash Bros. Melee) thanks to consoles provided by Sony.

There's only a scant few sporting events that can grab me so firmly that I end up watching most of the available coverage. The media-galvanizing drama at Wimbledon last week is one such case, as is the Superbowl and the bi-yearly international football competitions. Another, for me, is one that really isn't a 'proper' sport at all: the Evolution Championship Series.

Having begun life as "Battle of the Bay", a 40-player Super Street Fighter II Turbo tournament in 1996, Evolution - Evo for short - has quickly grown to become the largest exhibition of competitive fighting games in the world. Over two million viewers tuned in over the course of last year's event to see thousands of competitors duke it out live from Las Vegas, and the event now stretches beyond Street Fighter, this year featuring world-class competition in a whopping nine games.

Being a fighting game fan certainly helps, but there's definitely something about Evo that lets it sink its claws into those who wouldn't think they'd care. Watching Evo with my friends started as a quiet night in with fellow fighter fans, but gradually others not so invested filtered in - and then found themselves glued to the screen anyway. "These people play for a living?!"

"Evo is the equivalent of the Super Bowl," Evo co-founder Joey 'Mr Wizard' Cuellar explained to me while in the thick of preparation for this year's event, set to take place this weekend. I ask him how he explains it to those who might not be at all familiar.

"It’s a tournament once a year where the fighting game elite get together to duke it out and find out who the best player is. It’s also like a mini convention – we have sponsor booths there, vendors, indie developers, and a 'bring your own console' area so that you can play what you want."

That's the elevator pitch, sure - but what is it that makes Evo special?

"The atmosphere is easily what is unmatched," Cuellar tells me. "Evo is probably the most electric event that most people will see in their lifetime, and it is indescribable."

Evo likely owes a good deal of that atmosphere to the community it serves. Fighting game competition began in arcades, where players would sit across from each other or next to each other and 'pop off' on a regular basis, hopping up from machines, hooting and shouting to celebrate.

Arcade culture brings with it a not-always-perfect code of ethics and a taste for the flamboyant that is almost reminiscent of pro wrestling - and that seeps through into Evo, where big personalities become heroes and villains and gigantic salt shakers or signs designed to support or admonish favoured players are common in the crowd.

This year's big villain is 'Chris G', a player famed and mocked equally for wearing two sets of headphones at once. He's swept so many tournaments in a wide variety of games this year with his multi-game talents that it's made him public enemy #1 - something he seems to revel in. 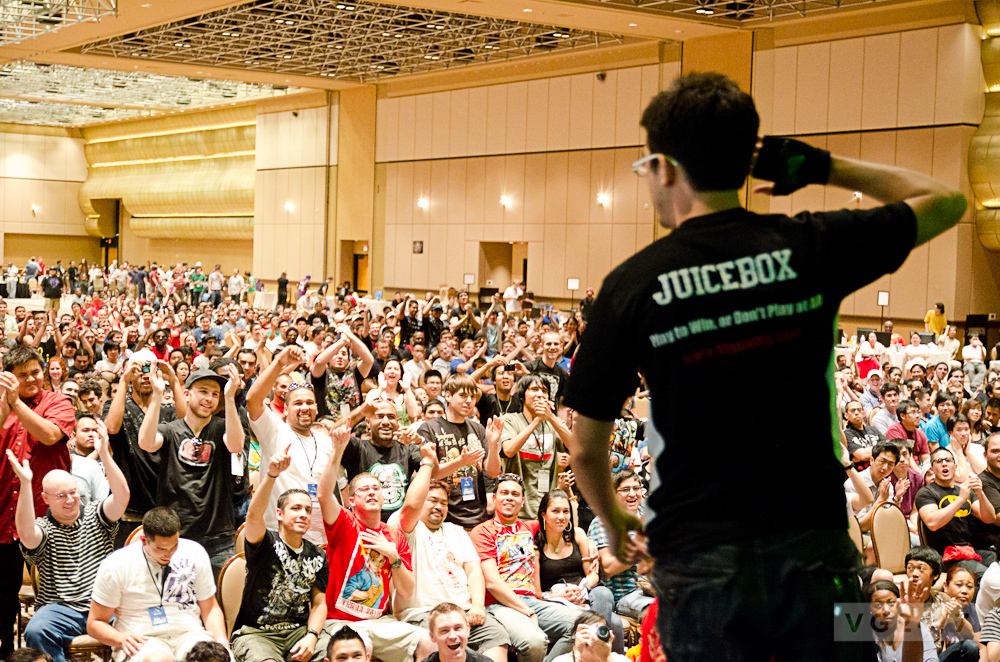 The crowd gets behind heroes and villains alike.

It's a strange and enticing combination, then - for one weekend the slightly ghetto, arcade roots-driven fighting game community mashes together with production values and viewer numbers to rival the large-scale multi-million dollar events of titles like Starcraft and DOTA.

It helps, too, that fighting games are so immediate and easy to understand. There's as much depth and terminology to Marvel as there is to Starcraft, but to even the most clueless viewer clearly visible health-bars, timers and round counters don't lie, and make a compelling proposition paired with excited, screeching commentators. It's no wonder that it commands attention.

It's at once more over-the-top and engaging to watch for its absurdity and often more respectful than what is often seen from competitive FPS games and gamers, who now so often start out cursing each other anonymously online and carry that through to their events. For all the ridiculousness, Evo remains a PG-13 event.

With that said, it hasn't exactly been a smooth sailing few years for competitive fighters. There have been a slew of issues with sexism and bigotry, and just last week a well-known Marvel vs. Capcom player made headlines when he was arrested for allegedly striking his ex-girlfriend. It's something Cuellar, and Evo, are acutely aware of.

"If the story says 'fighting game player', chances are high that Evo will be associated with the story," he admits.

"The constant pressure is always a factor to do better for everyone - all eyes are on us most of the time. If we end up making a bad decision, it reflects on the community as a whole."

Cuellar believes that Evo is more a force for good than for harm, though, something reflected in the increased role major publishers are taking in the event. They see past the occasional controversy the community causes, and this year's event will see what Cuellar describes as "exclusive announcements" from Microsoft, Capcom and Warner Bros - presumably about the upcoming Killer Instinct as well as the future of Street Fighter and Injustice, both of which are due additional updates.

"We've converted a few marketing people - who are the most jaded people ever - to believe in the magic that is Evo," Cuellar boasts. Evo's sponsors include Mad Catz, Atlus, Iron Galaxy and Marvellous AQL in addition to the three companies previously mentioned, while Sony has provided the PS3 consoles for the event. They must be doing something right. 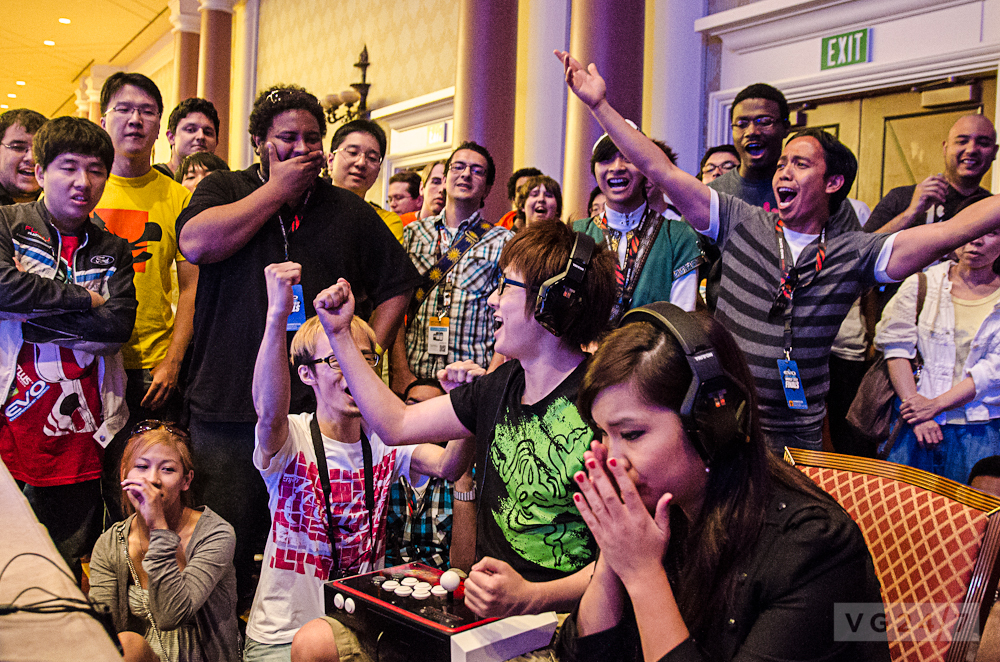 When a world championship is on the line, emotions run high.

While Evo and other smaller fighting game events are seeing dramatic growth every year, the community is still dwarfed in size and scope by other competitive titles such as DOTA, League of Legends and Call of Duty. While the fighting game community is chasing growth, Cuellar, at least, would rather Evo not be lumped in with those other 'eSports'.

"eSports is a term developed by some marketing guy to promote video games," he says when I ask if their success has been an inspiration. "Evo does take a few things from eSports, but we consider Evo to be more of a grass roots movement than an eSports event. Community first is the Fighting Game Community motto, and we like it!"

Even if there are bigger pro-gaming events out there, there's certainly a sense of prestige surrounding the event, and for one particular community it has been the holy grail ever since they were a part of it in 2008 but not invited back. Super Smash Bros has been defined as not being a fighting game by its creator, but a hardcore competitive community has sprung up around the series anyway.

This year Evo determined one additional game via a donation drive - players and fans could donate cash to a Breast Cancer charity through various links and the game that raised the most would get into Evo. All told, the Smash community collectively donated an incredible $94,000 to win the drive - more than enough to put on a major event all of their own.

"You have to see it at least once in your life. Evo is probably the most electric event that most people will see in their lifetime, and it is indescribable."

Yesterday, disaster struck - Nintendo of America got in touch with Evo and told them they were not allowed to stream Melee online. It threw the schedule into turmoil and left the Smash community devastated.

The response within the fighting game core fascinated me, and in my mind is proof of what Evo does to the community. In an instant the tone shifted - Smash, usually treated as a red headed 'not a real fighter' stepchild, was now a brother. The community hit Nintendo with a social media hurricane. Nintendo backed down bare hours later - an unprecedented move for the famously stubborn company.

Melee will be played and streamed at this year's Evo, then - and those games that didn't get in still raised the donation total to $225,000 between them - so they helped a good cause. "In no way could we expect such a big response," Cuellar said of the drive.

The result is that the Evo crew now have nine games to juggle, making scheduling and space at the huge venue - the Paris Hotel in Las Vegas - a nightmare. "We bank on some tournaments being small, but that completely backfired this year as almost every tournament is big," Cuellar admits.

With a week to go when I speak to him, Cuellar and the other organizers are in a crunch to meet deadlines. For a start, all the PS3 consoles used at the tournament need to be updated with the latest software, patches and necessary DLC for the games in question - and that's just the start. Cuellar has the stream setup to worry about, too - to ensure that folks at home can follow all of the tournament events via Twitch.tv.

The stream will feature commentators and pundits, special videos and stage presentations free of charge, but a high definition premium stream will also be available for a small fee. Even that doesn't go to Evo itself, and will be placed into a scholarship fund that will be used to give members of the community the opportunity to attend a prestigious college.

While the stream is important to him, Cuellar admits his first priority is and always will be the live event. "You have to see it at least once in your life," he enthuses - and he thinks once they've got you, you'll keep coming back. "Our retention rate is so high, that’s we keep growing year after year."

For me Vegas is just that little bit too far this year - but I'll be there in spirit, watching from home with a beer in hand. The debate about where competitive gaming sits in the pantheon of sports is one that can rage on as far as I'm concerned - all I know is that Evo gets as exciting for me as many of the best sporting events - and that's all that matters in the end.

Evo 2013 takes place this weekend, and can be viewed via Twitch TV or Shoryuken.