We're getting three PlayStation Plus games this December.

Update: Moments after we published this story, Sony decided to make it official.

The platform holder has now announced that, as seen in the leak below, your three PlayStation Plus games for December are Just Cause 4, Rocket Arena, and Worms Rumble.

All three games can be downloaded beginning Tuesday, December 1 and until Monday, January 4. Worms Rumble is available on both PS4 and PS5.

Original story: Most of Sony's official channels have yet to announce the PlayStation Plus free games line-up for December. The official Twitter for PlayStation Saudi Arabia, however, decided to pull the trigger a little early. 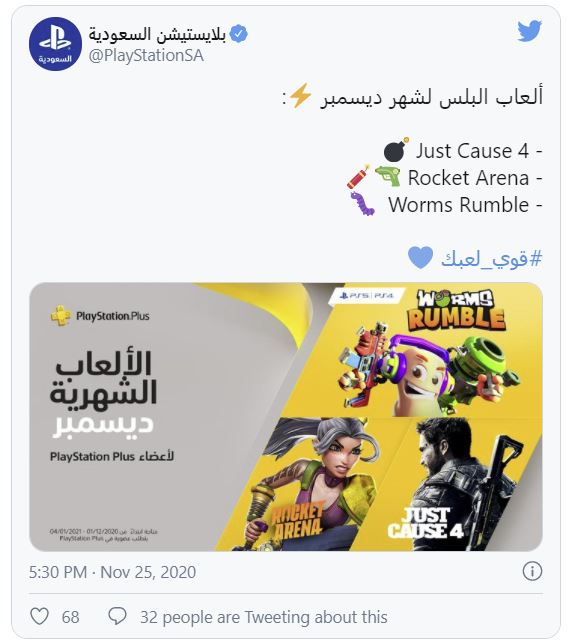 According to a Tweet that's since been deleted, PlayStation Plus members get Just Cause 4, multiplayer shooter Rocket Arena, and Worms Rumble in December. All three games are available on PS4, with Worms Rumble being available on both PS4 and PS5.

Worms Rumble, you may have noticed, launches into PlayStation Plus like Fall Guys, Rocket League and other multiplayer games before it. Usually, PS Plus line-up gets officially announced a couple of days before the new games become available, so expect some news soon.

All that said, it's worth keeping in mind that the line-up can be different for certain countries/regions in cases where a game is not available/banned in certain locales. Usually, though, it's identical.