Nielsen’s has released a list consisting of the top 10 PC titles per average time spent playing the US during June 2011 and it finds World of Warcraft topping the chart, and strategy title Warcraft III in second place.

Rounding out the top five are League of Legends - which is based on a WCIII map, Lord of the Rings Online, and Halo: Combat Evolved, with total minutes played hitting 3.9, 3.4, and 2.7, respectively out of 180,000 users polled.

Linden Labs’ Second Life, which hit ninth on the list back in May fell to number 11 on the list, and the game’s total share of the PC market dropped from .814 in May to .539 in June.

Going by market share, if you look at titles filling in spots 2-4, there isn’t too much of an over difference between the titles. However, when you start looking at the bottom five, you’ll notice staples such as Unreal Tournament, The Sims and Half-Life 2 tossed in with two of PopCap’s most popular titles: Bookworm and Zuma’s Revenge.

According to Nielsen ‘s GamePlay Metrics, the largest usage minutes of all measured console minutes spent in US homes belonged to Xbox 360 with an average of 26.5 minutes played on it per day.

Wii was second with 21.8 minutes played, with PS3 not far behind in third with an average 20.5 minutes spent on the console per day.

What is interesting, is that out of the homes polled in the study, 6.5 minutes per day were spent playing games on last-gen console PS2, followed by the original Xbox with 1.9 minutes and GameCube with .05.

The category of “other” on the chart consists of any other console systems found in the home.

What gamers are buying next

Nielsen Video Game Tracking asks participialants each week “which video game are you most looking forward to buying next?”, and if you look over the results from the prior week, you will notice quite a few games have moved higher on the list. Nielsen didn't’ elaborate on whether or not the drastic change in positioning has anything to do with overall buzz or the fact some are getting closer to release.

For the week ending August 13, Modern Warfare 3 was the top game on the list top by, where as the week prior it was at number two. L:ast week’s number one, Madden NFL 12, fell to third place.
Gears of war 3 moved up on spot to number two, Diablo III stayed in fifth, and Batman: Arkham Asylum fell from fourth to eight for the week.

Titles which made a significant jump on the games to buy next list include: Skyrim, up from number eight to the fourth spot; Battlefield 3 moved from number 11 to seventh, and SWTOR jumped from the 13 position to number 8.

You can view screencaps of the three charts below, or through here. 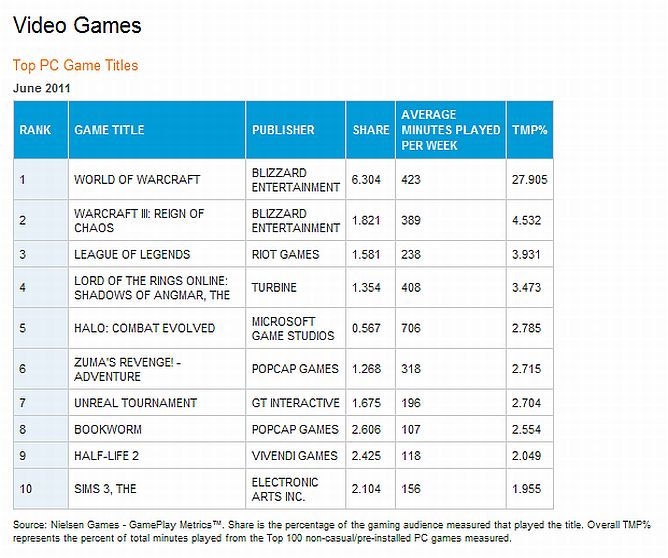 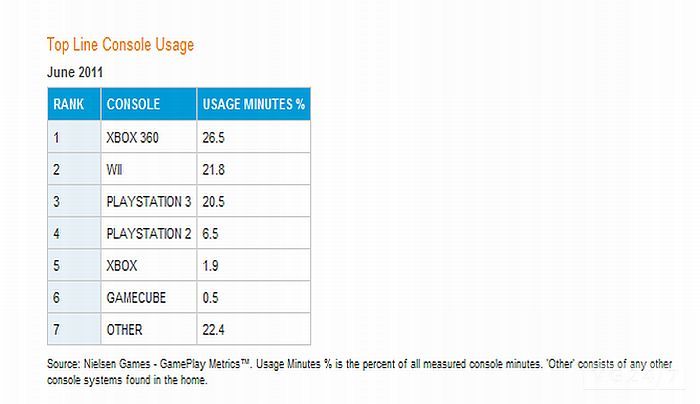 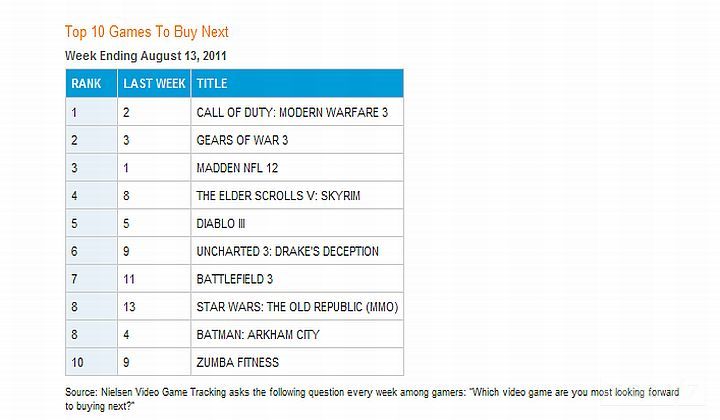