The iPhone and Call of Duty: Modern Warfare came out in the same year. It’s a fact that becomes starkly apparent when playing 2016’s remaster.

For all the fancy new animations and contemporary lighting, the game is forever dated by the Nokia-like phones brandished by its characters. There’s one in the hand of the snarling revolutionary who leads President Al-Fulani to his execution. And they’re all over the SAS base where ‘Soap’ MacTavish gets his training, glued to the ears of servicemen tuning FM radios.

Even the patter belongs to another decade: you can imagine remaster dev Raven debating whether or not to keep the officer who chastises “Miss Soap” for turning up late; is it better to remove all traces of sexism from the game, or reflect the backwards culture of an army that only last year opened all of its roles to women?

No matter how crisply rendered everything is, there’s no getting around it: where once Modern Warfare was a representation of cutting-edge military conflict, it’s now a period piece. Which will have made the task of rebooting it all the harder. 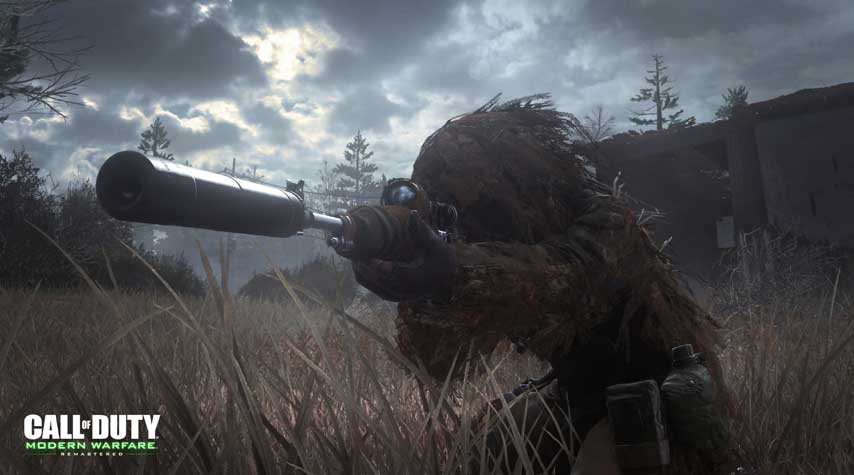 This year’s Call of Duty will be a soft reboot simply named Modern Warfare. You can see the appeal: the name is associated with the commercial and cultural high point of the series, when Infinity Ward comfortably steered the direction of the FPS genre and everyone else played catch-up.

But the studio as it is now - transformed by the firing of its leadership and gutting of its staff to form Titanfall’s Respawn in 2010 - doesn’t have the luxury of nostalgia. You can’t call a game Modern Warfare and fail to represent the world of war as it is now.

Back in 2007, with historical shooters giving way to the sci-fi concepts of BioShock and Crysis, Infinity Ward was able to seize the modern military landscape as its own. The developer folded in the post-Gulf War dominance of US army tactics; every mission started with a map-zooming target acquisition sequence that suggested heavy surveillance and reconnaissance, and more than one climaxed in a demonstration of the power and awe of precision-guided munitions.

The constant background tension was the same one that hummed beneath current affairs of the time: the knowledge that with the proliferation of nuclear weapons, instability anywhere could create a dangerous power vacuum that might threaten the great powers and present an argument for invasion. The spectre of the Iraq war loomed large, and growing cynicism around the war on terror is apparent even in the game’s intro. The Middle Eastern country President Al-Fulani leaves behind is “small but oil-rich”, and that’s deemed sufficient information to explain America’s interest in it. 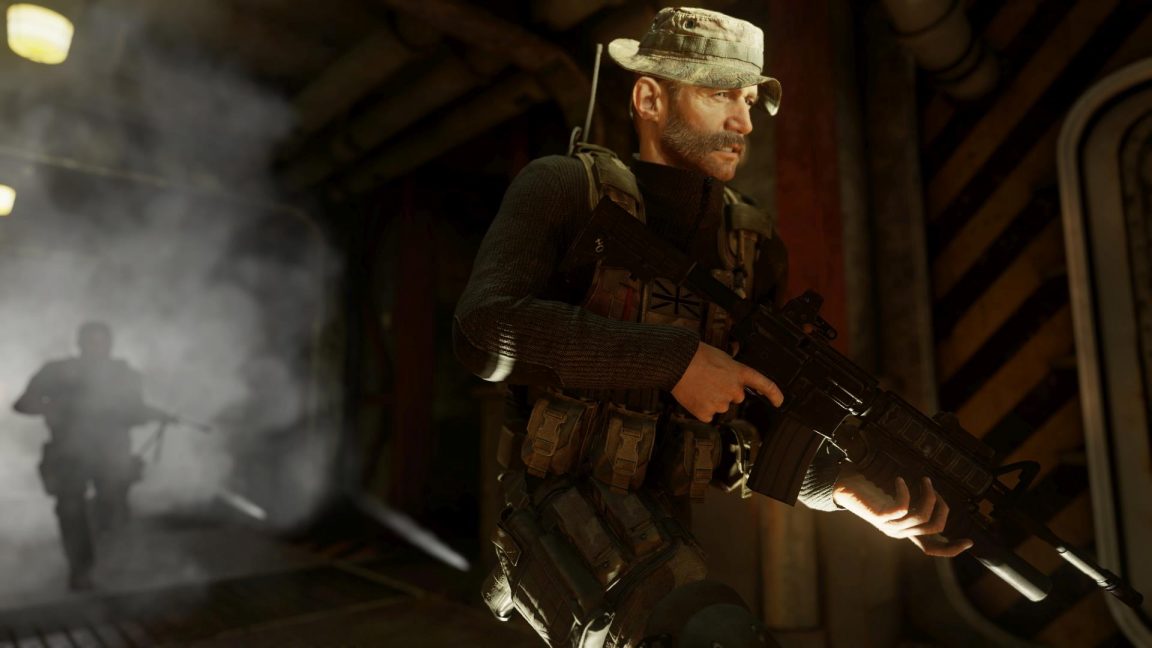 Infinity Ward tackled the rise of covert operations too, enabled by military transport that could zip soldiers halfway across the world in a matter of hours. Soap’s part of the campaign found the SAS collaborating and clashing with Russian soldiers in a civil war the UK had no official involvement in. It wasn’t clear what the nationalist group causing all the trouble in Russia stood for, nor the separatists who took Al-Fulani’s state by coup d'etat. Your conflict with them seemed incidental - they represented the danger of instability, rather than the obvious ideological opposition and existential threat posed by the Nazis in early Call of Duty games.

Sometimes it was clear where the developer stood on all this. Infinity Ward’s open admiration for the discipline and equipment of elite soldiers was apparent every time you cleared a room with your squad. Then there’s comrade Griggs’ withering verdict on the bloody assault of a TV station that turns out to be empty: “Score one for military intelligence”.

More often, though, Modern Warfare presented an unsettling situation and left you to draw your own conclusions. The mission Death From Above took place on a distant gunship, turning your targets into distant blotches of white. It was impersonal, as if you were clearing pieces off a board, and the off-hand manner of your colleagues on the radio was disturbing. Infinity Ward stopped short of condemning them, however - they were protecting an informant, and a wider world threatened by nukes, after all. Ambiguity, the developer suggested, was the defining characteristic of modern warfare. 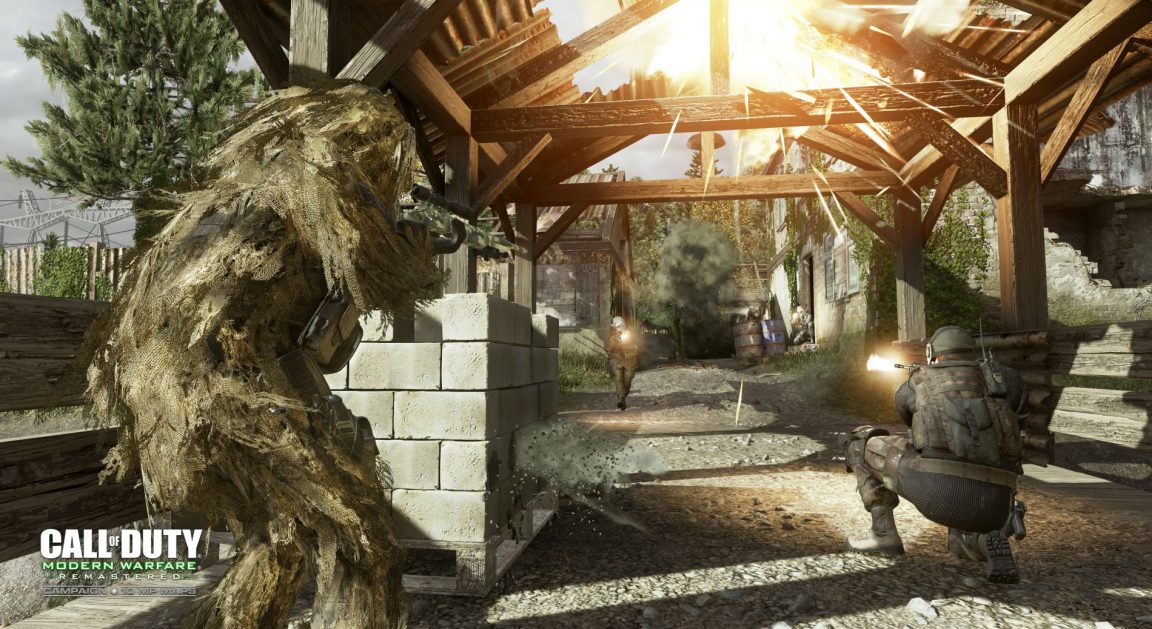 But that was back then. How will that team’s successor define warfare now? There are some aspects, sadly, don’t need updating - recent history in Aleppo and Mosul has shown that brutal and indiscriminate urban warfare isn’t going anywhere. Meanwhile, other threads explored in Modern Warfare have developed further in the last decade - especially the willingness of nations to take advantage of a “grey zone” between war and peace, taking territory without triggering wider conflict.

The ambiguity Infinity Ward identified has become a powerful tool for the modern warmonger. As for the cold distance of airships and drones - that’s only exacerbated by the prospect of autonomous weapons, with humans merely ‘on the loop’, supervising the machines during a mission.

But the studio will have been careful not to peek too far into the future for the reboot. Its last game, the space-faring Infinite Warfare, was deemed too far-fetched by the COD hardcore, who downvoted its reveal trailer into oblivion on YouTube. And there’s another problem: you could argue the studio has already been beaten to the punch in updating COD by fellow developer Sledgehammer, who tackled the commodification of war through private military companies in Advanced Warfare.

The picture emerges of a new Infinity Ward with very little room to maneuver - trapped between nostalgia for COD’s heydey, past attempts to contemporise the series, and an audience that has rejected the futuristic. We’ll find out how it’s fared in the imminent reveal of a new Modern Warfare, however truly modern that turns out to be.