Partway through Roads, the first episode of Life is Strange 2, protagonist Sean has a heart-to-heart with Brody, a kindly freelance journalist. He’s a traveller who writes for zines, websites and blogs, a person with a kind heart and an open mind. Sean pegs him (without judgement) as a “political” type, to which Brody earnestly responds “everything is political, Sean”.

This works as a sort-of thesis statement for the rest of the episode, and possibly the season. Life is Strange 2 is explicitly political, directly addressing the current state of American discourse, but it’s also political in more subtle ways. Judging from this first episode, it’s a game about the nuances of our actions, how our values dictate our navigation of a frequently unfair world, and what we pass on to the generations that follow us.

This is all true even when the game’s not directly addressing the current American situation. The game opens with Sean and his best friend, Lyla, talking about what Sean should text to a girl he has a crush on before the party they’re both heading to that night. This isn’t just a sly wink to the writers’ struggles to produce believable teen dialog in season one – it’s also a reminder that everything we say is coded, and the specifics of what we say or write are important to nail down, because everything is or can be rife with extra meaning, open to interpretation. 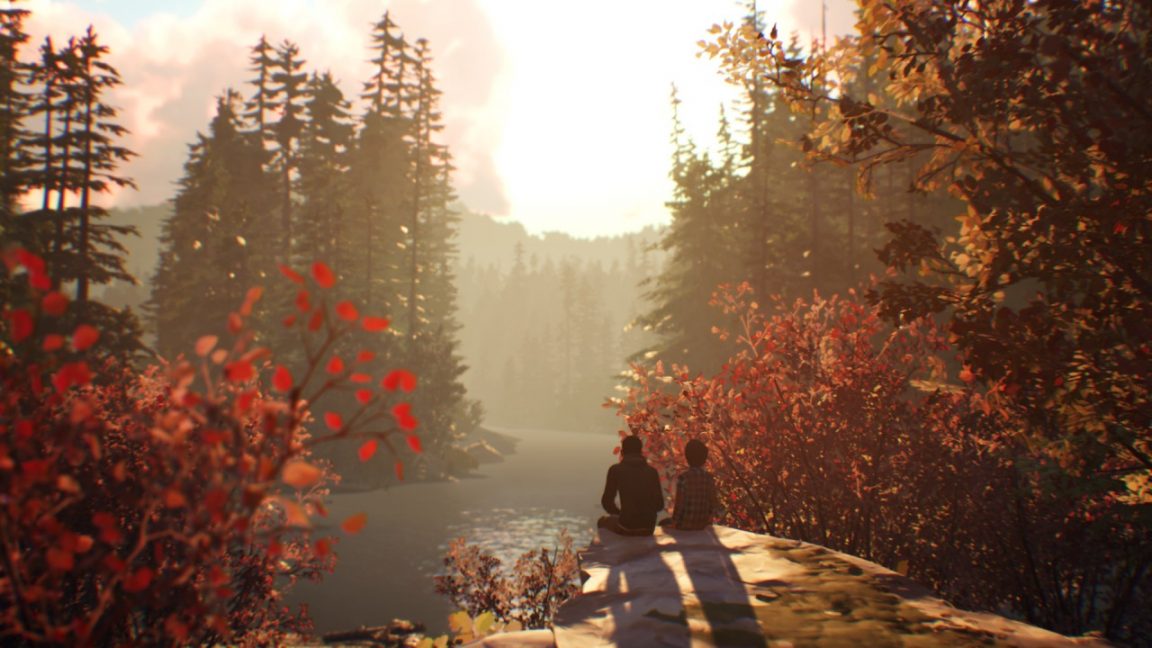 "Life is Strange 2 is explicitly about race, and what it means to not be white in America right now"

Life is Strange 2 is also a game explicitly about race, and what it means to not be white in America right now. Teenage protagonists Sean and his ten-year-old brother Daniel are of Mexican descent, and spend most of this episode on the run after a series of mishaps: a fight that goes badly, a trigger-happy cop, an unexpected supernatural incident. It’s best not getting into specifics, because the choices you make are best made without any knowledge of what outcomes they might have, or what situation the brothers might find themselves in right after you’ve made them.

The game opens very shortly after the 2016 election. The brothers encounter blatant racism from multiple angles – even if only one character comes right out and hurls slurs, talking about calling ICE and saying that America needs “the wall”, race is an element in every interaction the boys have. “Things are kinda scary out there in this country right now”, Sean’s dad tells him in an early scene. Sean and Lyla’s text message chain on your in-game phone takes a noticeable turn on election day. Trump is never mentioned by name, but Life is Strange 2 is not subtle about what it’s referring to.

This is not to say that the game is universally grim and dour so far; these are the realities of Sean and Daniel’s life on the run, but there’s more to them than their suffering. Sean is bad at talking to girls, likes to drink and smoke (both tobacco and pot), is a fan of Kurt Vonnegut and fantasy, and struggles with maths. Daniel is ten, loves Minecraft, thinks the best of everyone, and is prone to going off on tangents. He very clearly looks up to his big brother, and he’s the one that the game’s increased focus on the supernatural is going to centre on. There’s no time rewinding here (in fact the Life is Strange 1 references are limited to Easter eggs); instead, Life is Strange 2 seems like it’s going to focus on how Sean’s influence over Daniel affects how he uses his powers. What Daniel is capable of isn’t fully locked down during this first episode, although if you’ve played through The Awesome Adventures of Captain Spirit you’ll have a decent idea of what he can do. 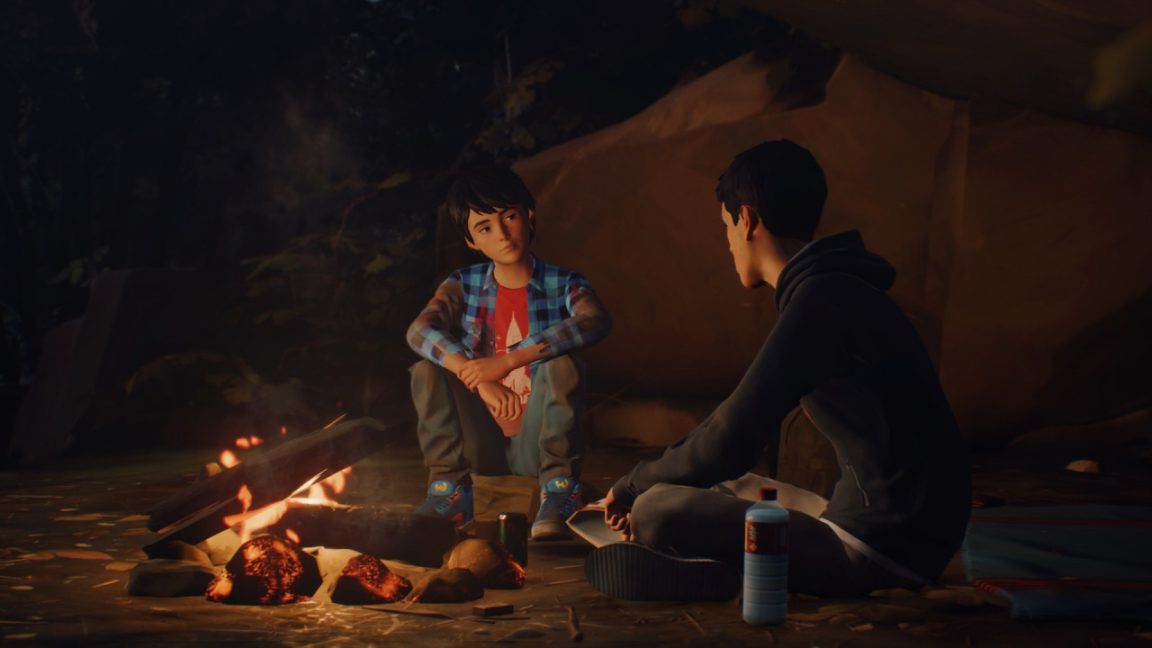 There are 23 distinct choices and potential outcomes being tracked in Life is Strange 2’s first episode. There are big obvious ones, where time will briefly freeze while you choose between options, and several smaller choices. Different choices can lead to unique outcomes, all of which is tracked – whether Daniel sleeps well while you’re camping midway through the game, for instance, is reliant on how cautious you were with what you ate earlier in the episode, and whether you chose to sneak up on Daniel and scare him during a game of hide-and-seek.

Paying attention to your little brother is important. At one point Daniel became muddy while climbing over a log – the game didn’t prompt me on this, but I later realised that if I’d taken more responsibility for him and stayed back instead of running off ahead of him I could have prevented this. Daniel speaks his mind in a way that occasionally feels artificial, just to really ram home how directly your choices impact him, but the relationship between the two rings true enough.

Life is Strange 2 loses a certain something by sending its protagonists on the run, though. It’s more ambitious in scope than the first game, but part of the fun of Life is Strange was getting to know Arcadia Bay and the cast of supporting characters – if Sean and Daniel are fugitives, they’re unlikely to make many friends (or enemies). This is an intentional decision, of course, but the Twin Peaks fan in me is enamoured with small weird towns in Washington and wants to spend as much time in them as possible (which, I suppose, might happen in future episodes). The broader social issues of being a teenager, which the first season handled so well, seem less likely to be a big part of this season too. 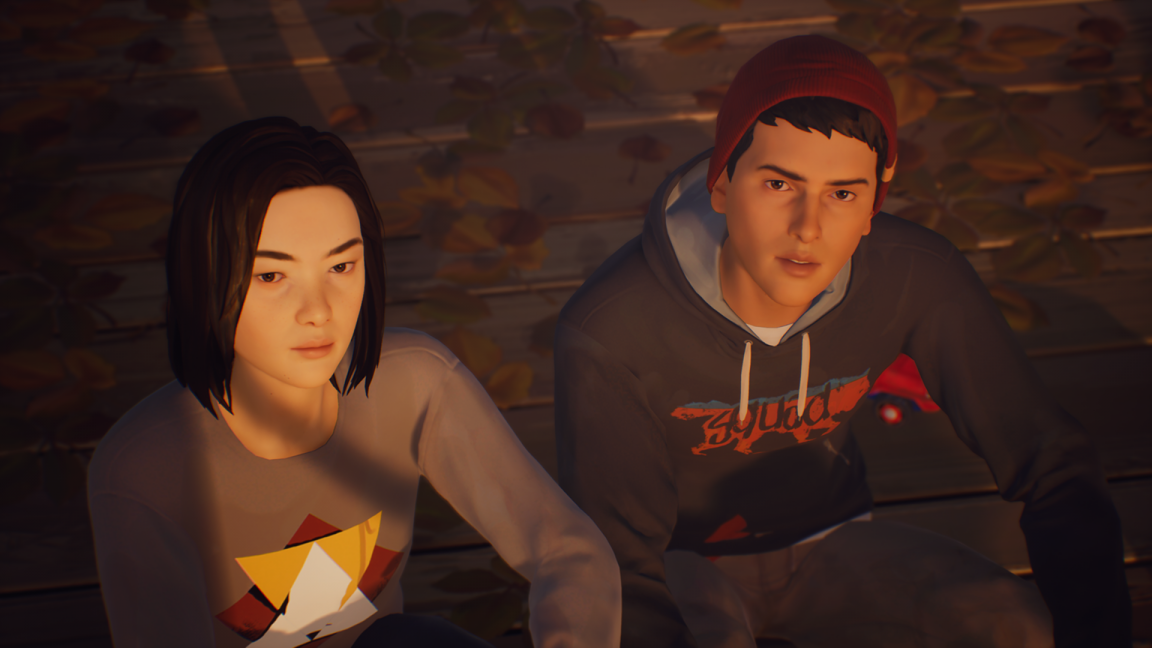 "The pacing is a little off in places, as though the game’s creators are overeager to show you how all the game’s systems and choices work"

The pacing is a little off in places, as though the game’s creators are overeager to show you how all the game’s systems and choices work. Conversations are packed with direct questions, and Sean’s reactions don’t always match up to how you might expect if the game needs to lead you to a specific outcome. At other times, conversations run for a while without any input from you, even when you might like to have a choice in what Sean says. There were also multiple strange visual glitches I encountered – floating objects, characters who would start moving very fast in cutscenes, clipping issues that were distracting during cutscenes. Nothing major, but enough to register as an issue.

It’s always difficult to know, from a first episode, what the whole season of an episodic adventure game will look like once it’s done. This is a particularly interesting time to launch, too – after the devastating collapse of Telltale, Life is Strange is by far the most prominent ongoing example of the genre.

But as of right now, Life is Strange 2’s intricate web of decisions and outcomes is promising, and the game seems to understand what makes this sort of experience interesting. After Daniel got dirty because I didn’t help him climb over the log, Sean said to himself “I’d be such a shit father”. In this moment, I remembered exactly what made the first season of The Walking Dead so special – the feeling that the characters being impacted by my actions mattered to me. Games like Life is Strange 2 work best when they ask us to decide what actions make sense in an unfair, unruly world, and what values we need to hold onto when our worlds collapse. And, perhaps more importantly, when they understand that everything is political.