Halo 4 developer 343 Industries has delivered an outstanding, yet safe first step into the franchise. VG247's Dave Cook discusses why it's already got him excited for Halo 5.

Bravo 343 Industries. You did it, you actually went and did it.

I'm not a Halo fan, but not for a lack of trying. I've played all the games - even Halo Wars - and I simply couldn't get into its muddled canon, floaty controls, and grandiose attitude. But Halo 4 has its hooks in me, so again - well done 343 - you finally got me.

"Whenever new studios take over development of an existing franchise, I pay attention. I do this because getting fresh eyes on something that already exists can often produce welcome and unexpected results.”

But here's the catch: I've never once viewed Halo titles as bad games. I have to stress that right now because while I've always seen the appeal of Bungie's franchise, it just never stuck with me the way other series have. Even I can't fully explain it.

Whenever new studios take over development of an existing franchise, I pay attention. I do this because getting fresh eyes on something that already exists can often produce welcome and unexpected results. It genuinely excites me, so I have always given Halo 4 the benefit of the doubt.

But once I started to play Halo 4's campaign, it was clear from the start that my attraction to the game wasn't because 343 had changed the formula to meet the demands of sceptics such as myself. Far from it. In fact, this is a pure Halo experience, right down to the last line of code.

So if you were ever worried that 343 had been handed the keys to Bungie's baby, and then destroyed any trace of its legacy, then don't be. From its opening moments to its highly suggestive ending, you will be right at home with Halo 4, just as if the series never left you.

Instead, it's appealing to me because the story is as bleak as hell. It's like if George Lucas were to re-order the original Star Wars trilogy and slap Empire Strikes Back at the start. That's a bold move from 343, and the plot presents the player with a dark new conundrum to overcome.

In terms of story-telling, this is a fine effort. Master Chief is awoken from stasis four years after the events of Halo 3. Cortana is well past her life expectancy and is dying, the Covenant are back, and the Forerunner menace is on the fringe of erupting once more. There's a lot going on. 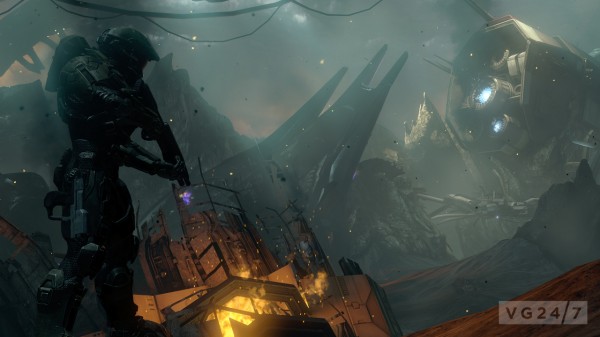 Everything is against you, and it's one of those 'success against impossible odds' scenarios that gets you fully invested in the hero's struggle. It all kicks off when the UNSC ship Forward Unto Dawn is sucked into the Forerunner planet Requiem, along with Master Chief and the remnants of the Covenant.

It's not long before you face-off against new enemy force, the Prometheans. They're an automaton race that act differently to the Covenant ranks you're used to. Crawlers swarm you in sheer numbers while Knights hold the back lines with unrelenting gunfire.

Overseeing the battle are Watchers, flying sentries that heal injured Knights, raise ad hoc cover and flit about at high speed. You need to take these guys out first, or you'll just be wasting ammo.

”It’s mental manipulation at its finest, and this is why I became engrossed in the plot. Plus the whole ‘Spartans as living weapons’ angle is going to be a big theme in this new trilogy.”

This may not sound like a seismic combat shift, but it's challenging, and forces you to act differently. Then - less than a third of the way through the campaign - you'll have to fight both Prometheans and Covenant simultaneously. It's madness.

Before long Halo 4's villain The Didact starts wreaking havoc on Requiem. He's a nasty bastard who enslaves the entire Covenant force and turns it against you. 343 already has the makings of a memorable bad guy, and it'll be interesting to see how he progresses from here.

It's important to say very little about The Didact for fear of spoiling the story, but know this: Halo 4 is by far the most personal story in the series to date. It focuses on John-117's role as a near-emotionless military tool, a weapon of mass destruction in his own right.

Then there's Cortana, whose descent into rampancy threatens your mission at several junctures. The race is constantly on to return to Earth in order to save her, and the futility of the task has been handled well by 343.

Will they make it back in time? That's a question 343 constantly tricks you into asking. It's mental manipulation at its finest, and this is why it's easy to become engrossed in the plot. The whole 'Spartans as living weapons' angle is going to be a big theme in this new trilogy it seems, and posing many questions about the UNSCs morality. 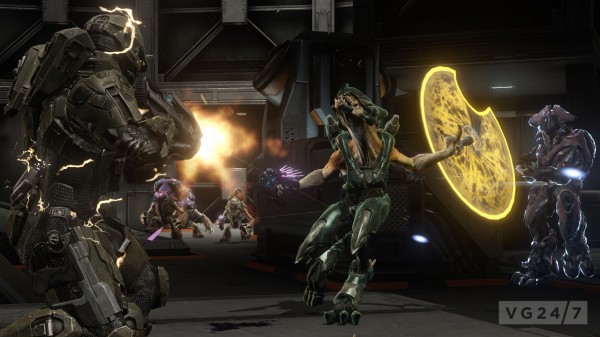 Here's the big 'but': While the opening missions on Requiem deliver a real sense of menace, you do eventually start fighting mostly Covenant again later on. Even though Promethean foes are doled out across the whole campaign, this is one area where Halo 4 falls back into all-too familiar territory.

By this point the story will have kicked into high-gear so it's not too much a problem, but there is a prevalent sense that 343 was holding back something, and that 'something' is was innovation.

Visually this is stunning, and the facial animation demands merit, but there isn't anything here that feels incredibly new, and it does often feel like 343 has held back the big changes for if and when Halo 5 emerges on Microsoft's next-gen console.

"343′s environment design is another high point, as it still encourages an open approach to tackling objectives. However, while the freedom to act is welcome, the sandboxes on offer have shrunk a great deal from previous Halo titles.”

That's a prospect that should get fans excited, and you'll better understand how 343's scope might widen after you've seen Halo 4's ending. Needless to say it ends with several big questions left unanswered.

Rather than shake up the Halo universe too much in this instalment, 343 has been wise to reel in its focus and deliver a solid outing first, before running riot in Halo 5 - and hopefully with the potential of next-gen tech at hand. Again, it's exciting.

Promethean weaponry is a sizeable change however, as the arsenal also gets you thinking differently about combat. Every firearm in the Promethean range comes with bullet delay, adding a new layer of skill into the mix. You do have to change your approach a little to master them.

But again, the Covenant weapons remain and the two sets of firearms complement each other well. The Light Rifle - the Promethean's resident scoped weapon - is a beast, as is the insanely fast Suppressor assault rifle that churns out bullets at an insane rate.

343's environment design is another high point, as it still encourages an open approach to tackling objectives. However, while the freedom to act as you see fit is welcome, the sandboxes on offer have shrunk a great deal from previous Halo titles. 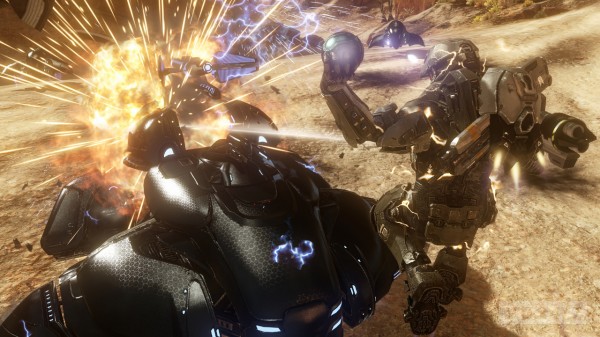 There's the odd Warthog section here, a spin in the new Mantis mech there, but these moments feel fleeting when compared to Halo 3's wide expanses. The locales are still big and impressive to look at, they just feel curbed by comparison, which isn't helped by an abundance of indoor stages.

”This is a shooter that highlights a franchise at the top of its game. It’s a big toe dipped into the drying pool of the current generation. The well has almost emptied and the next cycle of hardware beckons.”

In the end, Halo 4's campaign is a superb experience, and it's one that may convert many series naysayers and pull them into the fold. Hell, it worked for me, and I've been trying to tap into the franchise for a few years now.

This isn't purely an attempt to create self-referential fan candy, although long standing followers of the saga will appreciate fleeting nods here and there. Even if you're a Halo virgin you will still understand what's going on here, and as such, it's a neat entry point.

It's a relatively blank canvas, an unspun piece of wet clay that is only just starting to take form. Is it compelling? Yes. Is it revolutionary? No, but that's not to its detriment. If anything, Halo 4 proves that 343 is capable of handling such a coveted brand - which is no small feat I hope you'll agree.

But let's be clear on this: this is a shooter that highlights a franchise at the top of its game. It's a big toe dipped into the drying pool of the current generation. The well has almost emptied and the next cycle of hardware beckons.

This is when wonderful things should start to happen to the Halo franchise. But for now, take comfort that the series is in safe hands.

Halo 4's reviews are now live. Get all the scores here. Dave has also been playing a ton of Halo 4 multiplayer, but there's so much to talk about that it's getting a separate article. Stay tuned for his impressions soon.