Fallout 76: Nuclear Winter is a battle royale mode coming to the game which pits 52 players against each other for control of Vault 51.

Bethesda announced the news during its E3 2019 showcase. Nuclear Winter is a 52-player battle royale mode that pits you against your fellow players as you battle for the role of Vault 51’s Overseer.

In Nuclear Winter, you’ll take part in a 52-player fight to the death. Rank up, unlock new and exclusive Perks, deploy a C.A.M.P. and even launch nukes. As the ring of fire closes in, hopefully you will be the last one standing. 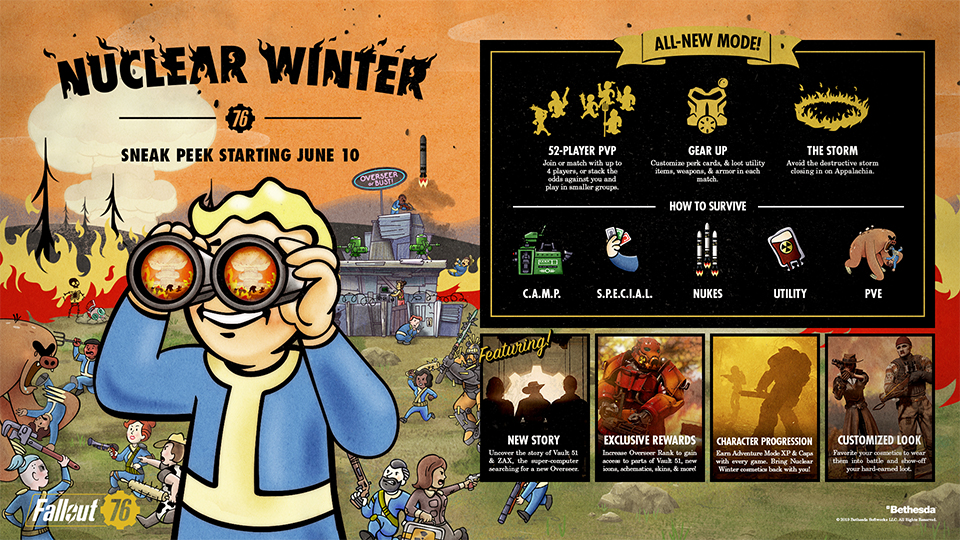 Here's what carries over

Players will also complete Challenges in Nuclear Winter, and any rewards from those, such as new cosmetics, workshop items, can be used in any mode for any character. As you rise in the ranks you will earn more bonuses, like profile icons, C.A.M.P. plans, Power Armor skins and more. You will also earn Perk cards by increasing your Overseer rank.

Any Perks unlocked in Nuclear Winter are exclusive to that mode and do not carry over, it was said.

Fallout 76 is also free to play from June 10 through June 17, on all platforms, including a sneak peek at Nuclear Winter.