A comet has appeared in Fortnite's sky, and it may spell doom for the Tilted Towers.

When players looked up during recent Fortnite matches, they noticed something strange: A blue object floating in the distance. Multiple eyewitnesses confirmed it wasn't a glitch, and it even seemed to be getting larger over time. After verifying this wasn't some kind of April Fool's joke, the community has determined this cosmic event likely heralds the end of Season 3 - and perhaps even the Tilted Towers.

This theory isn't baseless. As reported by Polygon, data mined game files confirm this object is actually a comet. Players also noticed that telescopes have been added to the map, each of which is turned to face the object. (Epic featured loot chests near the telescopes, so they're hard to miss.) 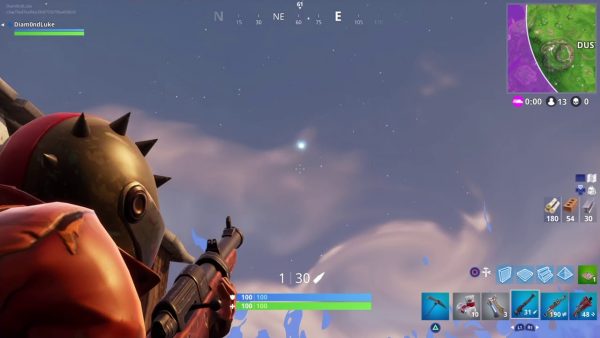 What's more, some have noticed that controllers rumble slightly as the comet appears in-game. Fortnite's Twitter support called the rumblings a bug, but one reddit user translated the pattern using Morse code and discovered a message: "SOS D 5 418". Outside of the obvious SOS, D5 is likely a reference to the Tilted Towers location on the map. 418 could refer to April 2018, a likely end date for Season 3.

What this means for Fortnite's future is anyone's guess, since Epic Games hasn't responded to comments on comets yet. Theories currently range from new space-themed maps to an extinction-level event that kicks off Season 4. What's clear is that we'll find out very soon. Keep watching the skies!