Rainbow Six Siege’s lean spam problem is being addressed, as is the cost of older operators in the game.

As part of a developer panel at the Six Invitational over the weekend, Ubisoft took a deep dive into the Year 4 roadmap for Rainbow Six Siege.

The broader lines are more dedicated teams tackling specific content or community issues that should hopefully result in a more responsive, agile team and a more balanced, inviting game. But so much more was revealed during the panel that doesn’t necessarily fall within this larger plan.

One big change Ubisoft previously teased is how the cost of the game’s operators will change the older they become. For a long while, the developer maintained that as long as all operators stay relevant, there’s no need to drop their costs.

This attitude began to change, however, and at the event, we got to see the first result of this shift in focus. Ubisoft unveiled a new tier system for operators based on their life cycle. Operators released less than a year ago will continue to cost 25,000 Renown, or 600 R6 Credits ($5). 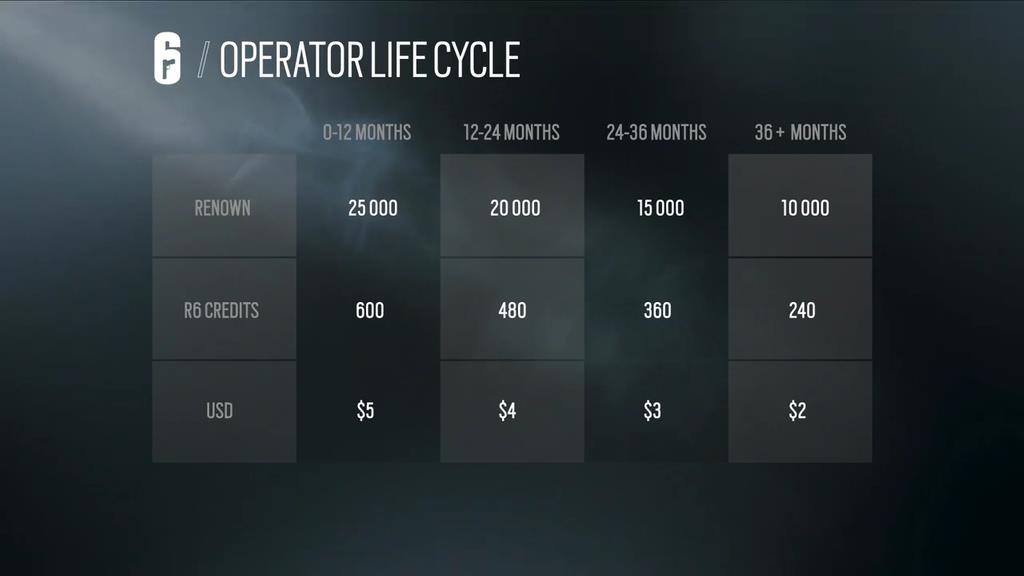 The drop in real-world value may not look too severe, but the Renown cost is ultimately what matters more. Players are encouraged to “grind” in-game currency to be able to pay for operators if they don’t want to buy the yearly pass. More than that, each year’s season pass is pulled from sale shortly before the new one begins.

This makes it hard for players to easily purchase the past year’s lot. This change will mean cheaper bundles, and cheaper prices overall for any operator players miss out on. It’s also great news for future players, and players jumping in late who are now going to find it much easier to buy the odd operator to be able to execute certain tactics.

Ubisoft also showed off the first implementation of a proposed fix for lean spam. The new animation has much less head movement in third-person, making it easier to land headshots, and it’ll be part of the test server patch hitting the game today.

You can see it in action below in this clip: