Early in the series, Assassin’s Creed lacked mission variety. Then as the years wore on, things pulled too far in the other direction, with big open worlds filled full of stuff for stuff’s sake. After a much-needed year off to replenish its creative edge, Ubisoft tried to change all that with Assassin’s Creed Origins and successfully delivered the best Assassin’s Creed in years.

While that was a return to form, Assassin’s Creed Odyssey plays like a greatest hits of the current trends in open-world gaming, with a tighter focus on story and side quests than overly-dense collectathons.

We got to play about the first six hours of the game and, judging by that small taste, it’s shaping up to be one of the most varied and engaging Assassin’s Creeds there’s been. 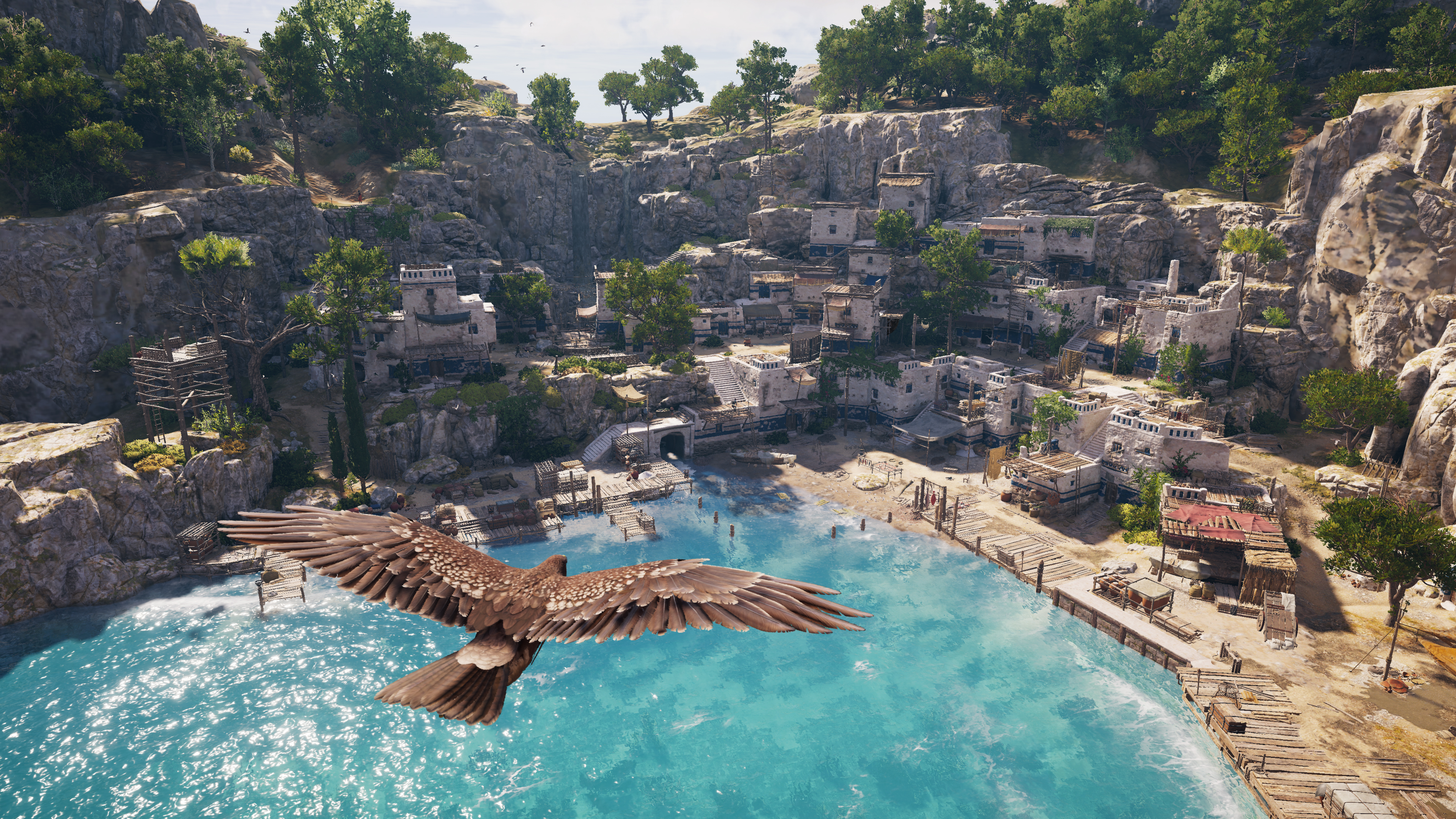 Odyssey starts in typically grand style, throwing you straight into one of the best known scraps of classical antiquity – as the legendary King Leonidas himself no less – during the Battle of Thermopylaethe, where 300 Spartans covered the Greek retreat against the invading Persian army. It’s a strong opening that not only introduces you to the mechanics of a fully kitted-out character with top tier suite of abilities unlocked, but straight-away ties your player-character to the storied world of ancient Greece by positioning King Leonidas as your grandfather.

After some more narrative set up, and once you’ve chosen to play as either Alexios or Kassandra, you’re dropped onto the western island of Kephallonia where your chosen Assassin is yet to don the famous hood, instead making a living as a mercenary.

You owe money to the wrong sort of people, and after fighting off a couple of goons you’re confronted with your first major dialogue choice of the game. The stories in Assassin’s Creed up to now have been static, but in Odyssey, Ubisoft is trying to give you more agency in how you approach situations, how your character’s personality develops, and give more consequence to every action.

A lot of games promise to offer decisions that matter, but the choices in the demo I played did seem to create demostrable differences in the game world, with certain dialogue paths leading to new questlines, fun set-pieces, and overarching changes in Odyssey’s main story. For example, you can choose to kill the debt-collecting thugs or send them running with their tails between their legs. The latter choice might sit better if you’re roleplaying someone that doesn’t take life lightly, but it means those same goons will call some friends, lick their wounds, and ambush you when you set off down the road.

When it comes to combat and abilities, Odyssey uses the same trio of skill trees as Origins – just with Mercenary instead of Seer in the third position. Assassin’s Creed always had a lot of weapons, but here it feels like a solid step above the work that Ubi started with Bayek in ancient Egypt. 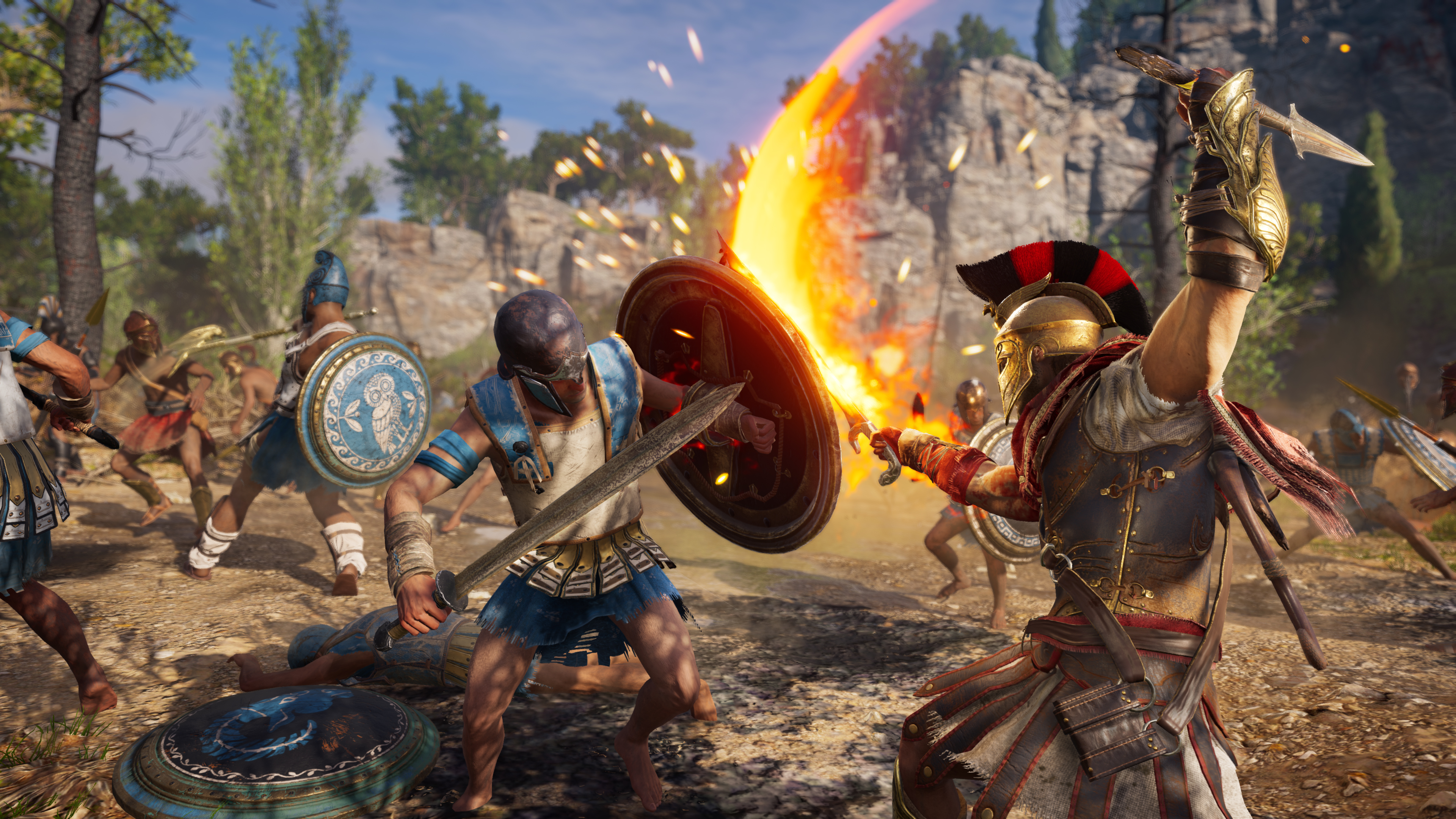 You have lots of options to choose from when you’re engaging enemies, and you’re much more of a one-person army than in pre-year-off Assassin’s Creeds. There’s always the tried-and-true stealth approach, but your skill trees also give you access to tons of outlandish special moves like a Bull Rush lunging attack and a “This is Sparta” kick that sends foes flying. It’s quite easy to take on big groups in Odyssey, but the mechanics for sneaking are still there if that’s your bag.

Your new superhuman toolkit is balanced by the frequency and strength of high-level adversaries. Everybody in Assassin’s Creed Odyssey has a level which governs how strong they are in combat, and you can really feel the spike in difficulty fighting against overleveled characters. Most strongholds will have captains and lieutenants that’re much tougher than regular fodder, so even though you’re powerful enough to wade in against ten or so guards, they won’t all be pushovers.

Different islands around Greece have differently leveled enemies, so the levels also act as a defacto funnel that pushes you from place to place throughout the open world.

Once you get to new places you can clamber up the nearest high point to get your bearings as usual, and doing so will reveal tons of points-of-interest and side quests to get stuck into. Like Origins, Odyssey’s side quests don’t always feature historical characters, instead telling short, quirky stories. There’s one where you bust up a bandit ring who’ve been running a fake shrine to the Gods and making off with tributes, then you can choose to try and answer worshipers’ prayers yourself.

The start and end points of quests are well designed, because you seem to wind up right next to a new quest surprisingly often. Plus, what was on Kephallonia was bite-sized enough to provide a fun distraction from the main quest, but not feel like you’re really bogged down.

Investigation Missions – which play out a bit like The Witcher 3’s Contracts – return. As do the Nemesis System-like Bounty Hunters that track you down if you annoy enough powerful people. 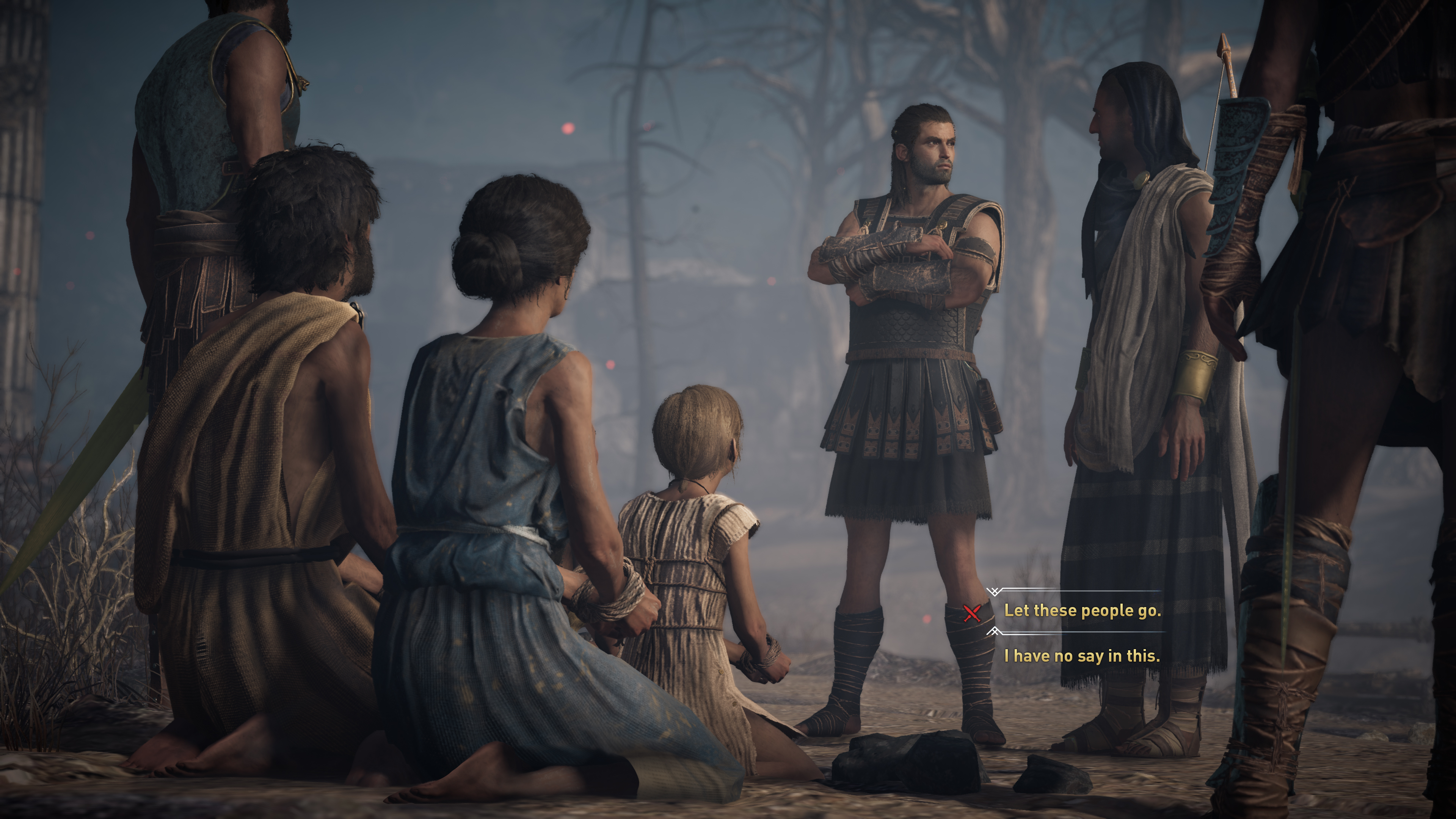 But as well as all that on land, there’s a whole seafaring side to Odyssey with naval combat and marine traversal. Once you’ve acquired a ship you can deck it out with cosmetics and upgrades, while also bolstering your crew by persuading knocked-out guards to come and work for you – a little like the Fulton Recovery in MGS V, Portable Ops, and Peace Walker.

There are a lot of systems stuffed into Assassin’s Creed Odyssey, but they all feel like they’re worth spending time with, rather than just taking up space. The challenge now will be to see whether that variety can be sustained over the length and breadth of the game’s huge map.

Assassin’s Creed Odyssey releases worldwide on Oct 5, 2018 for PC, Xbox One and PS4.