Vlambeer’s new game does have a working title, but it’s one developer Rami Ismail believes is totally rubbish.

I liked it, but he told me he likes his games to sound like 70s sci-fi so it’s going to change before release. He also said that if people see its working title on a site like VG247 it will stick forever, which was a flattering thing to hear. So I kind of reluctantly agreed not to report it, even though it was visible to everyone playing it at PAX West and it’s probably leaked on the internet somewhere. I did a quick Google search and it turns out there’s an Android game with the same title, and another one on Steam.

So anyway, the name isn’t important. What is important is that the game is good. Ismail told me he expected it to need more development time but after seeing the response from players at PAX, he might be able to bring the release forward. There were people sitting playing the game after 20 minutes, and it’s only a 40 second game. You will die while playing it. You will die quickly. So, what is it?

It’s a bullet-hell shmup with a puzzle twist. Not a deep-thinking puzzle problem, just a bit of on-the-fly problem solving. Your space ship begins with one enemy. You shoot it and it multiplies. If you don’t shoot it, that’s it. Nothing will happen. But your natural instinct when playing anything with a trigger is to pull it. You squeeze and there you go – you’ve doomed the universe to death and destruction. Well done. 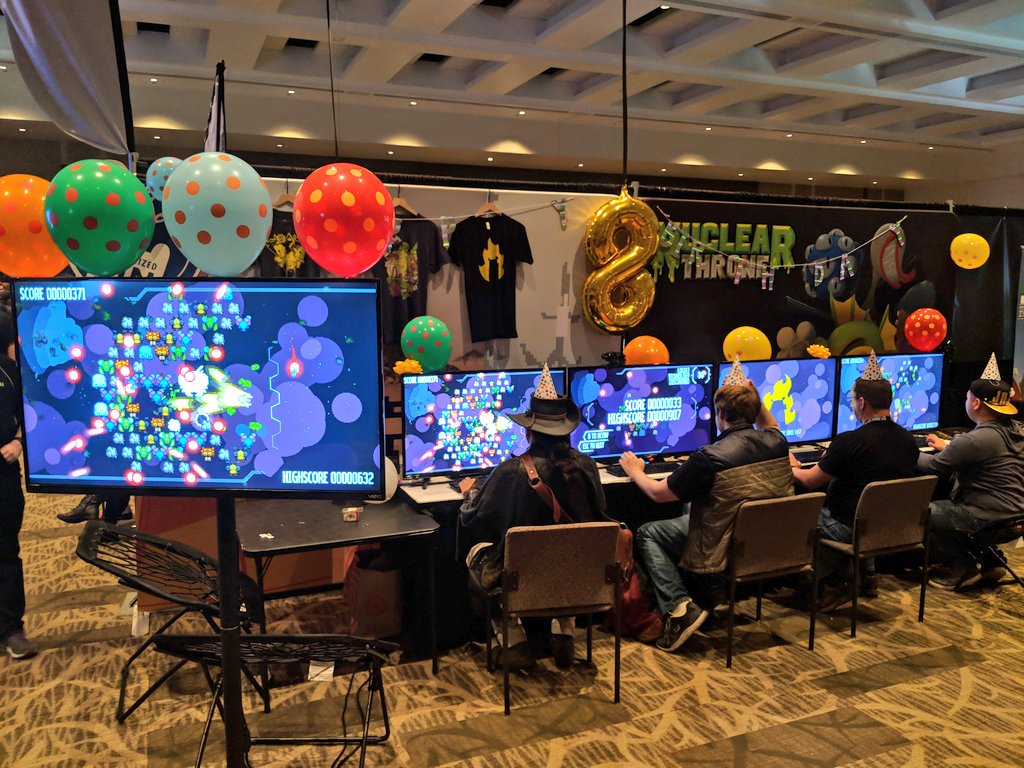 As an enemy ship is destroyed, it leaves behind green gunk. This then spawns into more enemies and the cycle continues until the screen is almost entirely filled with enemy ships. Some ships can absorb lots of the gunk and become huge. Different enemies have different attacks. Purple enemies explode, for example, taking other enemies with them, so you’ll want to use them strategically to take out multiple ships in one go.

Targeting locks on to the nearest enemy, so you don’t have direct control of where you’re aiming, but you can retarget something by taking your finger off the trigger. If an enemy fires a homing missile at you, rather than panic and fly off to try and avoid it, you just need to stop shooting and target the missile by letting it get closer to you.

It’s actually easy, but until it clicks it feels unnatural to stop shooting in a shooting game, or fly closer to something that will make you explode. You can also fly into enemies and you won’t be destroyed. Again, this is the opposite of what we normally do in shmups. It’s a case of unlearning, or throwing out traditional habits. Once you work that out, you’ll have the freedom to enjoy the game with a lot less frustration.

Vlambeer as a company said last month it had prototype ideas and wanted to work on smaller projects. Ismail supposedly just decided to put this demo live on his PAX booth to see what would happen, and it became so popular all four demo units finished with the game on them. Although there were placeholder screens and menus, the game felt close to finished. One screen points towards unlocks – most likely new playable ships – but whether those are just cosmetic changes or not I can’t say at this point. There also no formats decided yet, but Ismail did suggest it would be a low priced game.

I hung around the booth for a while and it was getting a good response. I’m pleased about that because there’s nothing better than walking past a game, picking it up and playing a genuine surprise. My first few tries were frustrating because elements of this shmup feel backwards, but Ismail was there to give me a briefing and talk me through as I played. Fifteen minutes later and it well and truly clicked. I was laughing and cursing at the same time.

When a game lasts less than a minute you have to take frustration on the chin. As a high score game you’ll be dead soon enough. But then you’ll also want a second and third go. Because that’s the beauty of a good arcade game.