Destiny 2 players have plenty of in-game fun to look forward in July, such as the Solstice of Heroes event . Changes are also coming to the Crucible.

Destiny 2 players will be able to participate in the Solstice of Heroes event when it kick off on July 31.

As we previously told you, the Solstice of Heroes event will be the only way to acquire level 400 power armor, before the Forsaken expansion hits in September. Bungie will provide more details on the event closer to launch.

Check out the schedule in the image below.

Crucible Ranks and the Crucible Playlist will receive an update when 1.2.3 drops on Tuesday, July 17.

Bungie provided a preview of the patch notes containing information on the Crucible changes, and you can find those below. 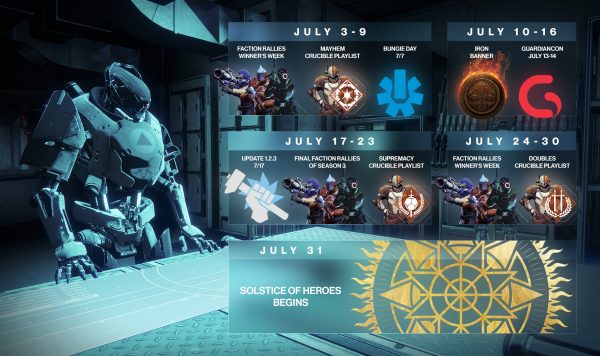 Other changes are coming to Destiny 2 in July, and more previews of the patch notes leading up to release will be provided.

For a quick rundown of all the recent news this week, check out Arekkz’s video.