“It’s this sort of glorious duet,” Jordan Thomas says as we discuss the type of game he loves making. He’s talking about titles such as BioShock, Deus Ex, Thief, and Dishonored – games that allow you to do things even their creators didn’t anticipate.

It is a design philosophy that powers experimental play, where the developers work to ensure every system in the game interacts. This ethos is what lets you strap a mine to a decapitated head in Dishonored before flinging it into a crowd like a macabre, makeshift grenade.

These same principles are bleeding into other genres, too – if you have ever used metal weapons to conduct electrical currents and ‘cheat’ your way through puzzles in Breath of the Wild, you will know what I mean. Players poking at systems, seeing what is possible, is why this unique game creation process feels like a collaboration – a “glorious duet”.

Thomas has always worked on these kinds of experiences. As well as creating the infamously unsettling Shalebridge Cradle level in Thief: Deadly Shadows, he is the designer responsible for Fort Frolic in the original BioShock. Both are games with consistent rulesets that encourage experimentation, and both these sections stand out because of their spine-tingling creepiness. The Blackout Club – the next game from Thomas and his indie development studio, Question – retains those qualities. 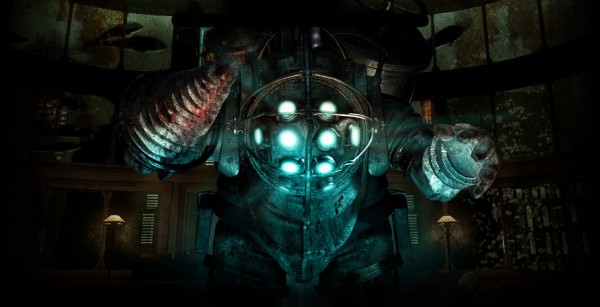 While working on BioShock, Thomas met another developer called Stephen Alexander. Both shared the same tastes and they became good friends by the time development wrapped up. “I was then recruited by 2K to start a studio and build BioShock 2 in basically two years,” Thomas remembers. “It was my first game as a writer and my first game as a director. I basically didn’t sleep.”

After stepping into Ken Levine’s shoes to create a sequel many deemed unnecessary at the time (though a growing portion of players now see it as the series’ best game), Thomas was asked by Levine to come back and help with BioShock Infinite. It was on that project that Thomas formed a reputation as a closer.

“This ethos is what lets you strap a mine to a decapitated head in Dishonored before flinging it into a crowd like a macabre, makeshift grenade.”

“I helped bring the team more in line with an achievable vision,” Thomas explains. “There wasn’t even a formal role. I had been on the series, I had dealt with the sequel problem before. I was like a shadow design lead – it was amorphous.”

BioShock Infinite’s development issues are well documented; the game we ended up with was massively scaled back from its original vision. If the project hadn’t been reined in, however, we may never have broken through the clouds of Columbia to the tones of a heavenly choir at all. 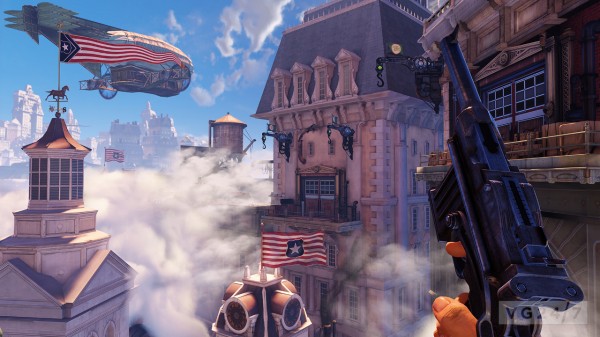 “The game had many creative pillars and we had to knock out a few to make others work … and that’s not how pillars work,” Thomas laughs. “Towards the end, particularly with all the moving parts of triple-A, you need someone to come in and say, ‘Are you willing to kill your darlings?’.”

Once work wrapped on Infinite, Thomas was at a crossroads. He fell back in with Alexander, and it was clear they both felt the same way. “We were pretty done, honestly,” Thomas recalls. “With triple-A to an extent, but also with very bloody, very serious first-person shooters. Stephen and I decided to move on. He had access to a house in the San Francisco Bay Area. Unity had exploded and the cheapness of engine tools made it clear we could do this.”

So the pair set off to create something for – and about – themselves with The Magic Circle, a caustic piece of interactive satire where the antagonist is the creative director of a video game and the protagonist is a self-aware video game protagonist. “We called it a palate cleanser,” Thomas says. “It continues to make money, but it wasn’t a hit. People warned us, but we needed to do it. It was completely uncompromising.”

After blowing off some steam with The Magic Circle, work is now well underway for The Blackout Club, which the team is hoping has more mass appeal than their cathartic-yet-niche debut. 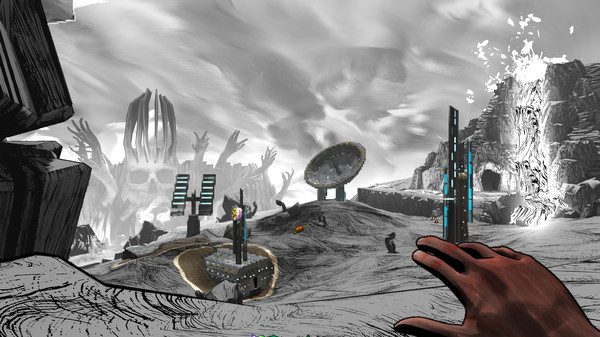 “In the wake of The Magic Circle, we knew we needed to maximise the overlap of things we love and things people will actually buy,” Thomas explains. “The indie game space has reached a glut point where there is a competent and well-executed version of nearly everything you might imagine, so you are always in competition with another game. We’re verging on the Netflix problem for indie film.”

Thomas and the team hope The Blackout Club stands out in this royal buffet. If the eye-catching announcement trailer is anything to go by, hopefully it will.

The Blackout Club is a four player co-op game set in a fictional slice of West Virginia’s radio quiet zone. This sleepy suburb is wrapped in a chilling conspiracy that sees adults sleepwalk during the night as other, mysterious forces pull their strings.

You and your friends step into the muddy trainers of a different blackout-suffering teenager. The young residents know something is off, and they want to prove it to the world. Every night, the teenagers meet in an abandoned train car on the edge of town to plan their next move.

“The protagonists are 13-16 years old and are much weaker than the enemies in the game,” Thomas explains. “You have to find ways to jump on their back and get them in a chokehold, maybe jam a sedative into their neck or hit them with a taser. The game is about outwitting a robust, adult force from your perspective as a teenager.”

Your main enemies in the game are Sleepers and Lucids. Sleepers are your parents, teachers, and cops, while Lucids are people who are willingly taking part in these experiments. Where Sleepers can’t see you on account of sleepwalking, unaware of their enlistment in this grand conspiracy, Lucids will shine a flashlight into the shadows and hunt you more effectively.

“In BioShock, Thief, or Deus Ex, you have your gun hand and your magic hand and you combine those two things to create some new effect,” Thomas says. “In this game those [‘hands’] are actually different people. So one player may have a power that allows them to prank call someone who’s about to catch them – it plays this pre-recorded message and they’re like, ‘Who the hell is this?’ Meanwhile, another player, who has the ability to do a takedown, is sneaking around the back of that person who has conveniently stopped on the edge of a shadow.”

The Blackout Club allows you to equip one major and one minor power, as well as a ‘hero item’ – grappling hooks, tasers, crossbows, and more – so the team of four players must choose powers that compliment each other to make it through each night. “A player who has the prank call power won’t be able to possess minds or sprint infinitely, running across rooftops without ever having to cease,” Thomas explains. “We consider those important design tradeoffs.” 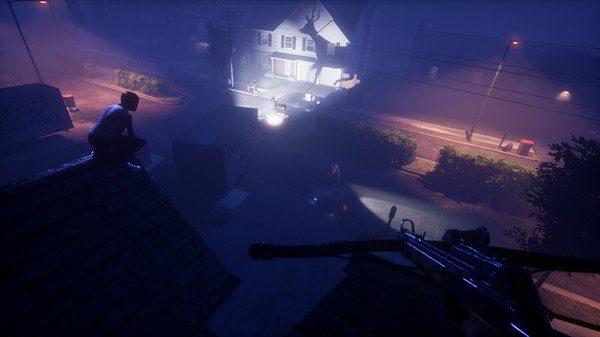 As well as dealing with Sleepers and Lucids, you are constantly hunted by an entity known as The Shape. The Shape is invisible to the naked eye, but it is always tracking you, scouring each level for the kids. If you commit a crime by sabotaging an experiment or taking down an enemy, it gets a ping and its search area closes in. You can only see The Shape if you succumb to your blackouts.

“It is completely unscripted. The Shape is a hunting agent that’s out there in the system and has to use actual senses to find you,” Thomas says. “You feel like a scared kid being hunted. You have to squeeze your eyes shut. You have to let the world fall away and you can’t see anything except for the boogeyman … and he could be right next to you. The Shape has access to some space the players can’t enter, but it doesn’t cheat. If you’re not observant, it might get close to you. You’re constantly afraid of where it might be.”

On top of this invisible threat, there is an optional Adversarial Mode that adds in another player-controlled character. This fifth player must stalk and secretly record the four co-op buddies as they try to complete their mission. Every successful recording causes The Shape to close in.

“It’s like painting a target with a laser,” Thomas explains. “It’s a pulse pounding stealth game, hiding in shadows – it’s really entertaining and really stressful. It’s incredibly creepy because if you are recording one of the kids, they get an in-game cellular photo of themselves and it says, ‘I’m watching you’. You can see yourself and try to reverse engineer the likely vector they fled along.” 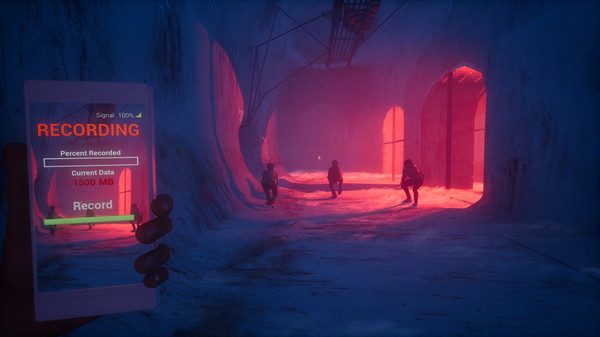 As with the other games Thomas and the team at Question have worked on, it will be completely up to you how you solve these problems. You can rely completely on stealth, or take a more bullish, jock-like approach, manipulating the AI to make it through each custom-built space.

“We’re trying to make it very friendly to a direct, punk-rock approach where the kids don’t care and they’re trying to make a statement,” Thomas says. “At the other end of the spectrum are a team of ghosts. It’s still a horror game, so one of those styles flows into the other as the stakes raise, but you can pick your powers to focus on one extreme.

“The kid who picks powers that allow him to knock down enemies and keep them there doesn’t have to worry as much about stealth – you can run through the mission. As long as you don’t screw up, you don’t hesitate – you have to enter a state of flow – you can complete the mission, but you will be accruing tons of crime and will bring down the boogeyman faster.” 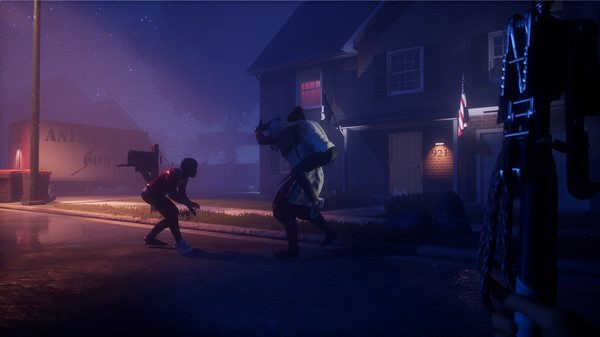 Still, combat is not the primary verb here. You won’t survive a head-on assault, so you have to think about how to solve every encounter. In an age where similar triple-A experiences such as Dishonored, Deus Ex: Mankind Divided, and Prey have struggled, could this project be as much of a risk for Question as The Magic Circle?

“The game consumer has become a little obsessed with value over time – the idea of a game as a machine that must continue to generate new experiences essentially ad infinitum,” Thomas explains. “So what we’re doing that’s hopefully more in line with the modern Steam consumer is that you do build a relationship with the game. It’s quite difficult early on to survive the night. You learn via experimentation, visiting the same location and trying a radically different strategy.”

Instead of offering a cutscene-filled story with a rigid beginning, middle, and end, The Blackout Club reveals itself to you forensically. You discover the world as you play, through environmental storytelling and through the mechanics themselves. I don’t know about you, but I can’t wait begin my investigation and perform my own glorious duet with Question when The Blackout Club launches in 2019.