A new car drops for GTA Online today, and likely, you already have enough cash to purchase it. Unless you spend money like it grows on a tree in your backyard.

The Viseris will be made available for a paltry 875,000 in GTA Online, soon.

That’s rather inexpensive for a GTA 5 sports car. Available through Legendary Motorsports, the Viseris comes in various colors and modifications include forward facing twin machine guns. It also tops out at 146.5 mph (235.7 km/h). Nice.

According to information provided by FoxySnaps, the vehicle is part of a GTA Online update landing soon, which will include Slasher’s Adversary Mode running through January 16, and 2x RP/$GTA on all Lester Contract Missions.

Players can also expect 25% off various vehicle upgrades as well as the Ultralight. 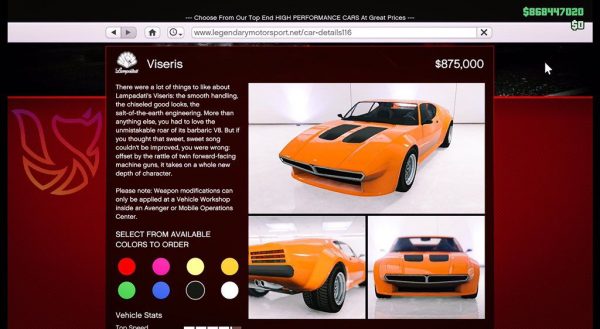 Rockstar should announce the update later today, so check back later on for the all important details.