Make a vision quest into Norse territories and be a tourist in a different mental state in Hellblade: Senua’s Sacrifice.

Hellblade: Senua’s Sacrifice overtly attempts to emulate the experience of psychosis – or one experience of it, anyway. I don’t know how accurate and effective it is, any more than I can make judgments on its treatment of Pict and Norse culture, but I can say it affected me very strongly.

I spent most of the game in a state of tension close to terror. There are some horrible things in Hellblade: Senua’s Sacrifice.

Boldly, Hellblade: Senua’s Sacrifice doesn’t go out of its way to explain itself. The pause screen has a barebones control layout guide, and you’d better study it, because there will be no on-screen button prompts to explain how to do anything – including essential gameplay functions. The voices will prompt you, but you’ll have to independently work out what button to press to do what they’re suggesting. It’s a small thing and most of you shouldn’t have any trouble with it, but it wouldn’t get through a focus test and someone is definitely going to get upset about it.

Having completed Hellblade: Senua’s Sacrifice, there are still some things I don’t fully understand. Early in the story there’s a combat encounter you’re supposed to lose, and when you do, you get a warning message that every time Senua is defeated the rot that has infected her arm will spread. If it reaches her head, the game warns, you’ll get a proper game over and lose all your progress.

This is a very player-unfriendly mechanic, and I honestly don’t know if it’s really real; making us question the rules of our reality would be very on theme for Hellblade: Senua’s Sacrifice. But if it is, the implementation is patchy. The first boss I fought, Surt, put me down about 18 times before I finally understood what the hell is going on in the combat, and Senua suffered no ill-effects. Later, I died once to an environmental challenge and got a little cutscene indicating the rot had progressed, and I thought oh, okay, I see, it only happens if you die outside of boss encounters. But I got the same thing several times in a later boss fight, so who the hell knows what the rules are? I could have died to find out but I was already about nine hours in and didn’t fancy starting all over again just to check. 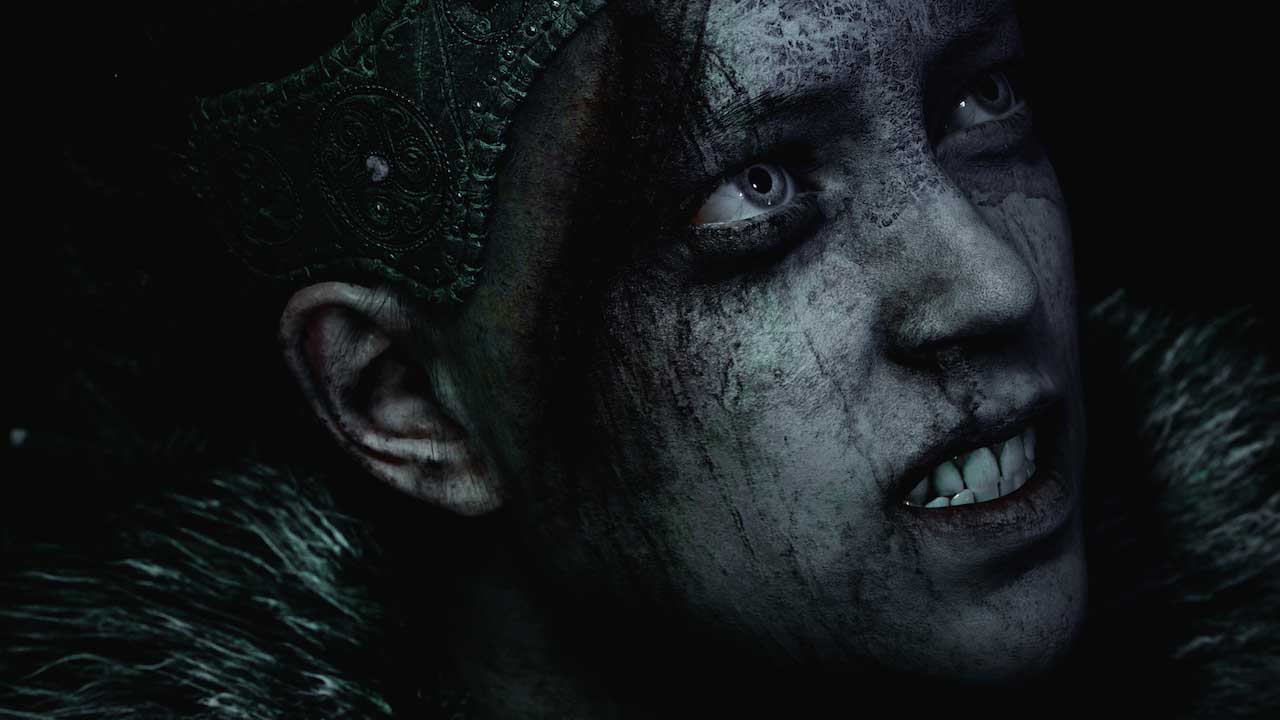 Also, I was sick of dying. I actually ended up turning the combat difficulty down to easy, not because the fights themselves are so hard but because they just go on and on. Even after you upgrade your sword and learn how to do Senua’s best attacks, even grunt enemies take a hell of a beating. This gets pretty dull, but worse, gives you more opportunity to end up backed into a corner where you’re unable to dodge or otherwise escape. The camera is at fault here; the perspective gives you no idea of what’s behind you and you have only the most minimal control over it. Almost every hit I took in a fight was due to getting stuck between an enemy and the environment, which was super frustrating.

Even when I wasn’t suffering from the claustrophobic camera, combat became very wearing on medium difficulty and above. Later battles involve dozens of guys, each of whom needs half a dozen combos to take down, and since there’s not that much variety in enemy type it gets old fast. Pop down to easy and dispatch ‘em all before your next birthday. 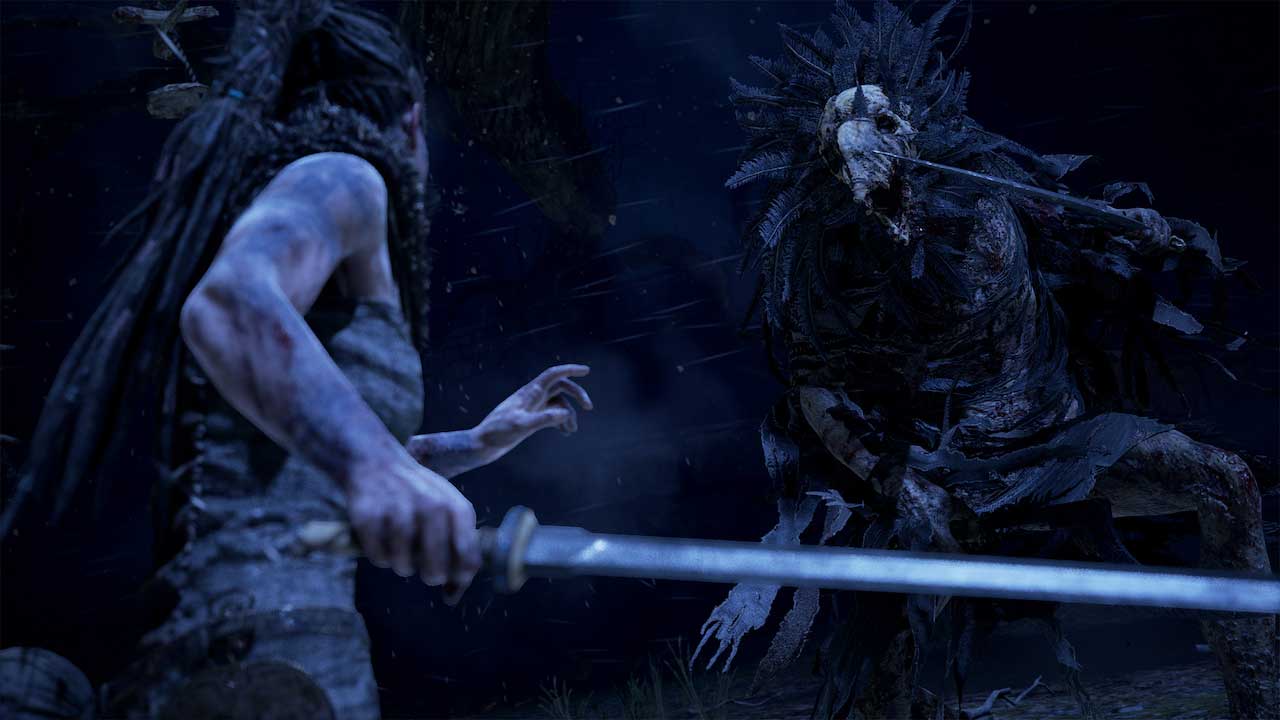 The “sword sponge” effect really detracts from what is otherwise a pretty fun battle system. There’s satisfaction in dodging and picking the right attacks to combo together to prevent your enemy getting their guard back up. Evading an attack you can’t see thanks to a warning from the voices, dash attacks against distant enemies, and cleaving your way through groups of foes in Focus mode is glorious. Shorter (and maybe more numerous) encounters, and fewer enemies with apparently limitless health bars, would have maintained my interest in battle right through the game.

What actually happened was I began rolling my eyes and groaning every time a fight started, because it represented a boring chore between me and the next excellent environmental set piece. There are some really fun non-combat challenges in Hellblade: Senua’s Sacrifice – or perhaps I should say engaging rather than fun, because I spent most of the game in a state of tension close to terror. 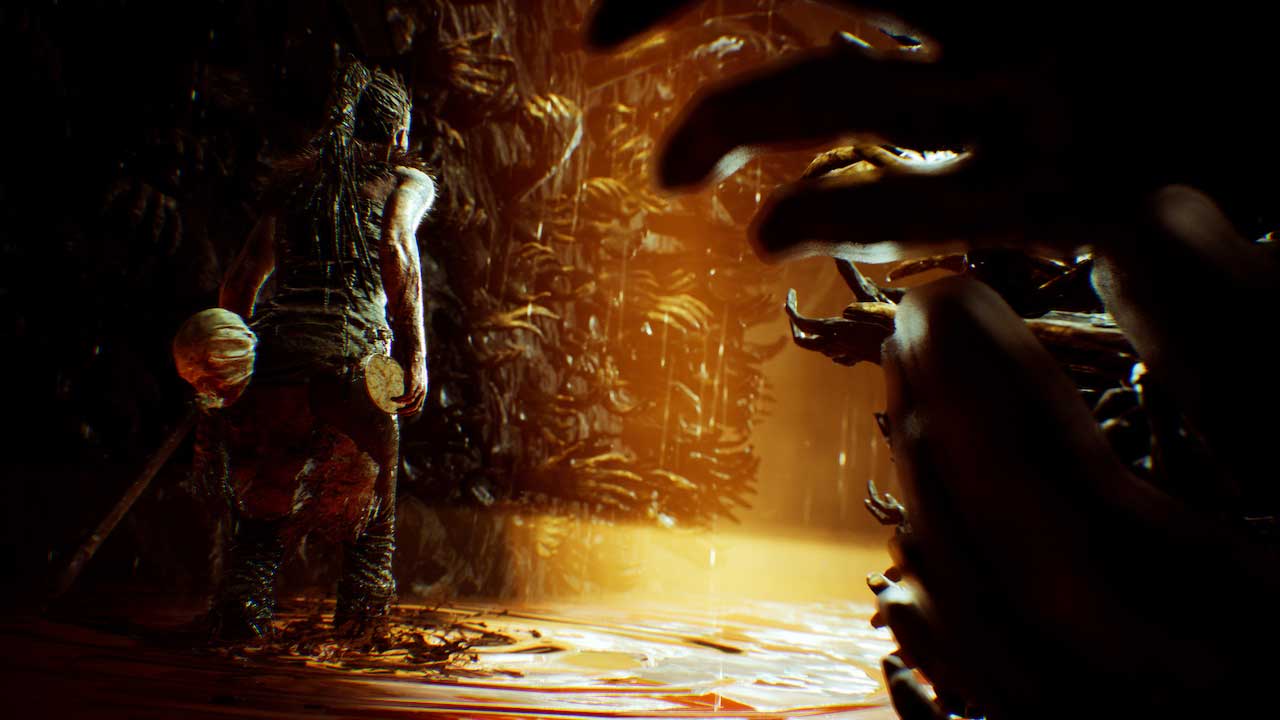 There are some horrible things in Hellblade: Senua’s Sacrifice, which I don’t want to spoil – but even if I did, it’s not the creepy and gory assets themselves or even the concepts they represent that are so effective; you could find similar materials in many horror games and movies. Instead, it’s a powerful combination of these assets, beautiful environmental design, excellent lighting, emotive voice acting and performance capture, unsettling visual effects and above all excellent sound design that add up to a tense and horrible atmosphere.

One of the pre-game loading screens suggests players use headphones for Hellblade: Senua’s Sacrifice so as to experience the binaural audio, and to this I can only say yes: do yourself a favour and get a headset on. The circling chorus of Senua’s inner voices is an especial highlight. It serves the same function as typical game voice over by guiding you to objectives and conveying story information, but in a fresh and unique way that if often very unsettling, for all sorts of reasons. (The “Darkness” voice, as I’m calling it for lack of a non-spoiler term, is not so good, unfortunately. It’s overused and pretty generic.)

Although the puzzles, stealth and exploration challenges are enjoyable, they’re not especially difficult – and it doesn’t matter. The atmosphere Ninja Theory’s artistry has evoked often disguises the simplicity of what you’re actually doing, which is the real trick in games; you never want the punter to realise they’re just pressing buttons. Hellblade: Senua’s Sacrifice is full of moments of such oppressive horror that I would find myself almost unable to play on, questioning whether I could continue with what, on reflection, was not a difficult task. 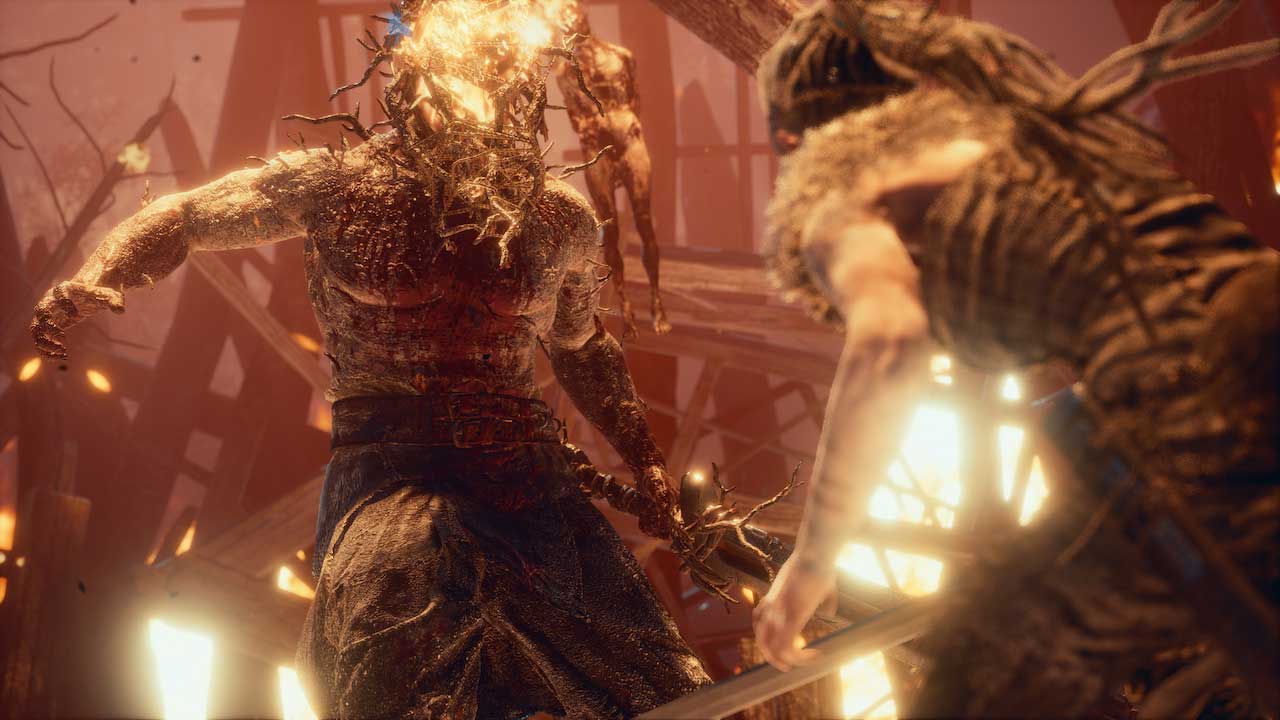 One memorable sequence had me exploring a nearly black environment (for goodness sake, do not cheat: adjust the gamma and brightness so you really experience those inky shadows) in which something lurked. I have no idea what it was because I edged around the room, camera resolutely turned away from the small sounds it made, nearly crying with fear as I tried to find a clear path.

In another, I ran frantically through a maze-like environment lit near as bright as day, catching occasional glimpses of something roaring along in pursuit of me, enormous and unstoppable and all-consuming, whenever I made a particularly sharp turn. I couldn’t find the exit and I fell into an actual panic.

Then there was the time I ran into the dark, against the suggestion of the voices, and hit a dead end, where – you know what, I am done thinking about this. I do not want to remember that. I did not try it again. 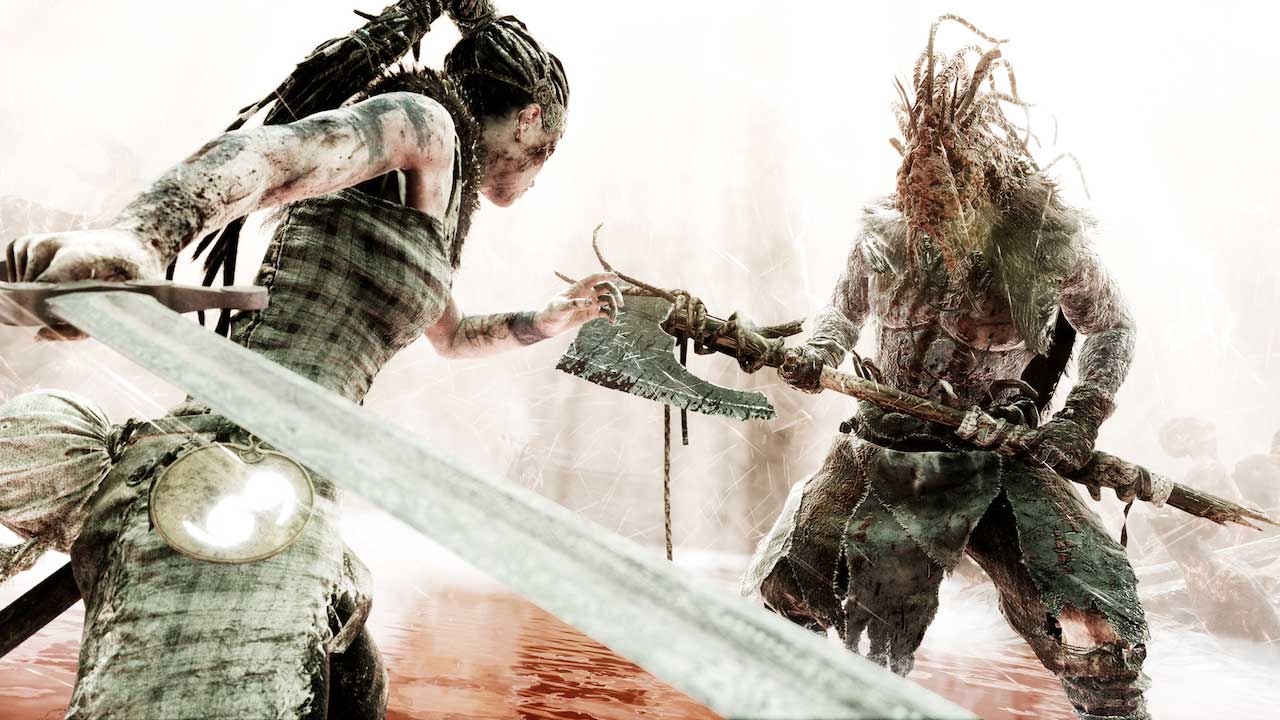 Towards the end of the experience – which runs eight to 12 hours depending on how thorough you are, I’d say – things got a little less satisfying. Like most horror experiences, it is undercut by an attempt to tie things up neatly and calmly at the conclusion, which is a real shame. There’s also a bit too much exposition in the back end, especially if you already get it, and it all gets a bit preachy. The last hour could be attached to any action video game, as opposed to the much more powerful journey we go on to get there.

That’s a good point to end on, I think: for the majority of its run time, Hellblade: Senua’s Sacrifice felt like something much more meaningful than a generic action video game. It felt like a work with something to say, and it made me want to listen, even when what I heard frightened me so badly I could barely press on.