Destiny had a rubbish story. Destiny’s follow-up content mostly improved on it. Destiny 2 has a good chance of doing even better. Let’s discuss. 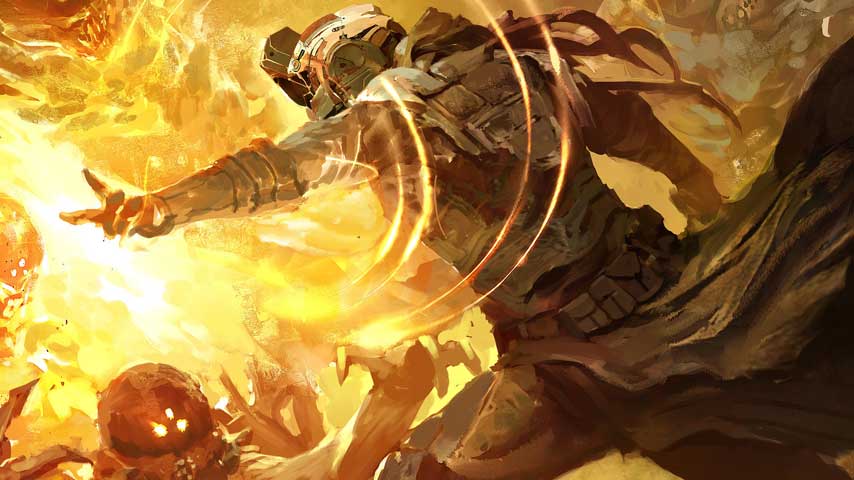 Destiny 2 is on its way and there’s been a lot of talk about how its story won’t suck – as opposed to the story in the original Destiny, which certainly did suck. In this three part series, we’ll take a look back over why Destiny’s story fell so flat, how Bungie improved on it over the years, and why Destiny 2 might not be utter bollocks.

Destiny’s campaign is not a good story: nobody is ever given a reason to care, the antagonist is a literally faceless faction and all the best stuff is in the Grimoire.

While there’s never been official confirmation, it seems pretty clear that a major upset at Bungie saw Destiny’s story overhauled relatively close to its September 2014 release; Kotaku‘s report only lent credibility to the rumours and the evidence of our own eyes. The result of this last minute change was not successful: Destiny’s story is forgettable, and full of loose threads that either pick up in Grimoire cards or never pick up at all.

Destiny’s story is designed to take you on a tour of the four main playspaces (more properly “destinations”, and I’m still mad about that) and introduce you to the four enemy factions. Well, perhaps “designed” is being too generous – I suspect that the destinations and difficulty progression were in place, and then someone had the thankless task of trying (and failing) to link it altogether in a meaningful way (while staying in-line with whatever new strictures had suddenly been handed down about how it should and shouldn’t go).

It’s the way most big budget games were made, before narrative became a selling point; level and mission designers do what the hell they want with fire and ice levels, and then someone comes along in the last six months and desperately hammers nails into it in the hopes it hangs together. It didn’t work.

The rapid-fire tour of the four enemy races does nothing to make them compelling, with all that material locked away in the Grimoire instead. The introduction to the Traveller, the Light and what it means to be a Guardian is rushed and incomplete. We’re supposed to buy into an unsophisticated good versus evil binary, which is a big ask when nuance and ambiguity has been the norm in video game storytelling for years and years. It wasn’t successful, either; most players aren’t even aware that the Light and the Darkness exist, and those that are mostly sat around talking about how any minute we’d find out the Traveller was actually evil and scrabbling at the slightest clue to back up this far more compelling scenario. 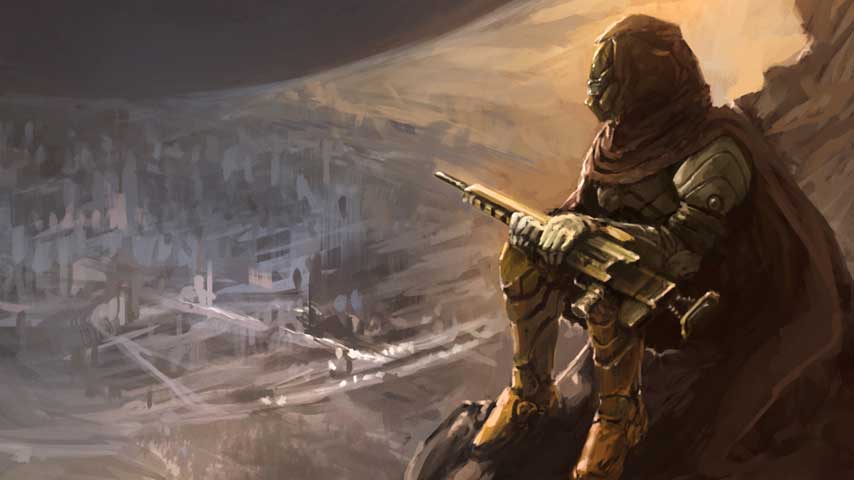 For those who understandably can’t remember it at all, the bare bones of Destiny’s story are this: player is resurrected as a Guardian, and Bungie undersells how cool this is and what it means. The player is sent on a mission to find out what the Fallen are up to, and discovers some sort of weird signal related to the Warmind Rasputin while they’re shutting the Fallen’s plans down completely. However, the player also discovers the Hive have returned to Earth, which is a more immediate problem, so they go to the moon to give the Hive a walloping.

Check in with our Destiny 2 guide for everything you could need on Bungie’s next big thing.

On the moon, the player meets the mysterious Exo Stranger, who tells them to come to Venus if they think they’re hard enough. Being more than hard enough, the player finishes walloping the Hive, then goes to Venus, where they discover the Vex. The Vex are the big bad of vanilla Destiny, and Bungie once again completely fails to communicate this.

By fussing around on Venus and walloping everything they see, the player discovers the Vex are up to something nefarious to do with the Black Garden. Making a bargain with the Awoken, whom Bungie totally don’t explain in any way in-game, the player learns that the entrance to the Black Garden is on Mars. The Cabal are also on Mars, and the player gives them a little bit of a walloping, pretty much just because they’re there. No real justification is given for it and it has no ramifications for the plot; the Cabal are just in the way and had to fit in here somewhere.

The player then enters the Black Garden and shuts down the Vex’s plan in a boss battle, which would be climactic if we’d been given any reason to care about or even remember the Vex outside the Grimoire cards. Everyone rejoices, and the campaign ends with the Exo Stranger turning up to say well done you and give you a rubbish gun, and also to convey absolutely zero information about who she is and who she works for. Then she vanishes forever. 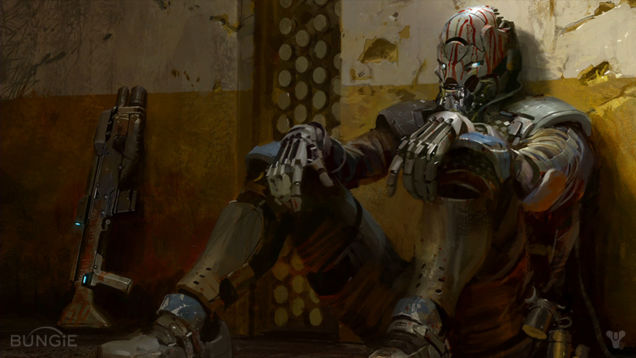 But wait, there’s more! The story of vanilla Destiny doesn’t actually end until the player and their fireteam triumph over the Vault of Glass, the first raid. Unfortunately, hardly anybody realises this at all, because most players have no idea that the Vex are the antagonists of vanilla Destiny or what they’re up to; because the story of the Vault of Glass is entirely told in Grimoire cards and equipment descriptions; and because the raid is inaccessible to casual players. Hell, prior to The Taken King the raid wasn’t acknowledged in-game at all; NPCs didn’t mention it, and no quest markers led you to it. It was just a map icon.

In short, vanilla Destiny’s campaign is not a good story: bits of it don’t contribute anything to the overall plot, most of it is poorly communicated, nobody is ever given a reason to care, the antagonist is a literally faceless faction, you’re never even shown that the last mission is connected to the story and all the best stuff is in the Grimoire (the Vex are actually terrific villains, though Destiny does its best never to tell you that).

This is a real shame because the universe of Destiny, and even the vanilla story, has great potential that just isn’t allowed to shine. Why this happened is a bit of mystery: Bungie does know how to make good story missions, and we even see hints of that in the vanilla campaign, as with the creeping shadows of the Fallen in the tutorial mission, and the tense horror of discovering the Hive. We can only assume that story overhaul just came too late for the team to do anything decent with it, and it’s been too flat out since then. 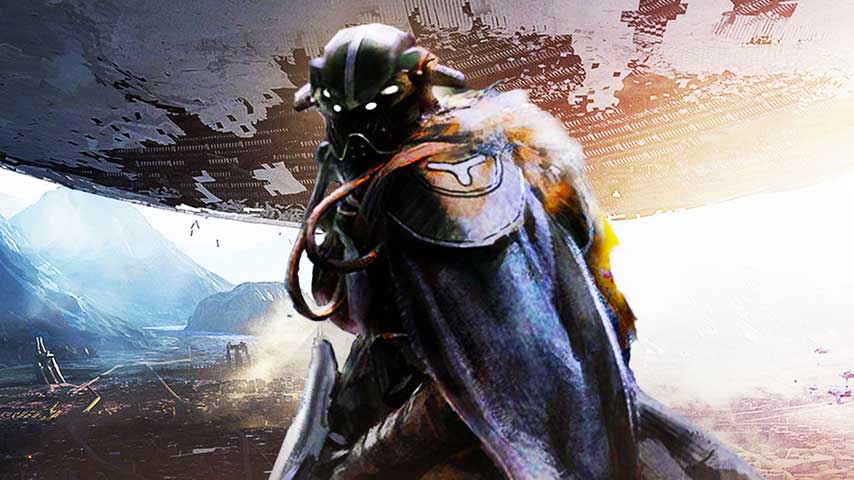 For the most part, Destiny players don’t know or care about the story and setting. Part of that is just gaming; for each of us who dives into that stuff headfirst, there are dozens more hammering the skip button on every cinematic and not giving two hoots who they’re shooting and why. Fair enough, too – horses for courses – and certainly Destiny was a roaring success even as its narratives hugely undersold its fascinating lore.

The lore really is fascinating, but you have to want to get at it, because it’s mostly conveyed in the Grimoire, and in equipment descriptions that don’t make sense until you read the Grimoire.

The Grimoire is a collection of stories and background material that contains some of the best short fiction writing ever featured in a video game.

The Grimoire is a collection of stories and background material that contains some of the best short fiction writing ever featured in a video game, although admittedly it doesn’t have many competitors. It cops a lot of flak for not being “in the game” (you have to load up the app or Bungie.net to access it), and certainly it does feel like Bungie wrote a whole bunch of great stuff and then had to shoehorn it in any old way it could after the main narrative was overhauled.

On the other hand, would this stuff actually work in-game? How many players actually read through text logs? How many even watch cutscenes? Some of the stories in the Grimoire could make excellent campaign missions, but many of them would not; they exist to add colour to the game world. By taking them out of the game, Bungie avoids boring everyone else, and there’s something to be said for lying in bed tapping through Grimoire cards and piecing together stories at a time you haven’t put aside for shooting space faces. (Go grab all those calcified fragments and read the story of Oryx’s ascent to power; it’s amazing.) 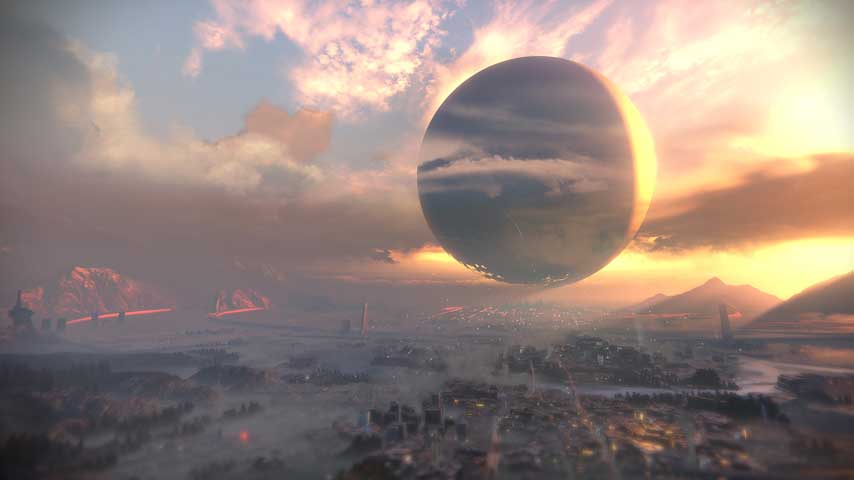 Where the Grimoire really does fall down is in suggesting the background lore of Destiny is far more complete than it actually is. With all Activision’s talk of a ten year game and an exciting new universe to live in, I had envisioned Bungie sitting down and really hashing out the whole thing, putting together a lore bible, planning out its storytelling for years to come (as opposed to having a power point slide saying “one expansion for each type of baddie”), filling in masses of background that might never see the light of day, ensuring everything came together and gelled nicely and never broke its own rules.

Where the Grimoire really does fall down is in suggesting the background lore of Destiny is far more complete than it actually is.

That’s how the best fictional universes are built, and The Grimoire looks a lot like the sort of thing that might happen as a result of it. Unfortunately, it really does seem Destiny was built as shooty-shooty-bang-bang first and then had the lore bolted on, just like most video games. For example, we recently learned that Bungie never actually had a plan for the Darkness, the big bad of Destiny, making all those theories constructed from little in-game and Grimoire hints absolutely pointless.

Bungie is even ret-conning the Darkness; in the first Destiny, the Darkness is some sort of force that follows the Traveller, the mysterious being of Light who granted Guardians their powers, and the four enemy races were “minions of the Darkness”. That’s all gone for Destiny 2; the Hive worship the Darkness, but they’re not themselves the Darkness, and none of the other races have a relationship with it. So much for that. 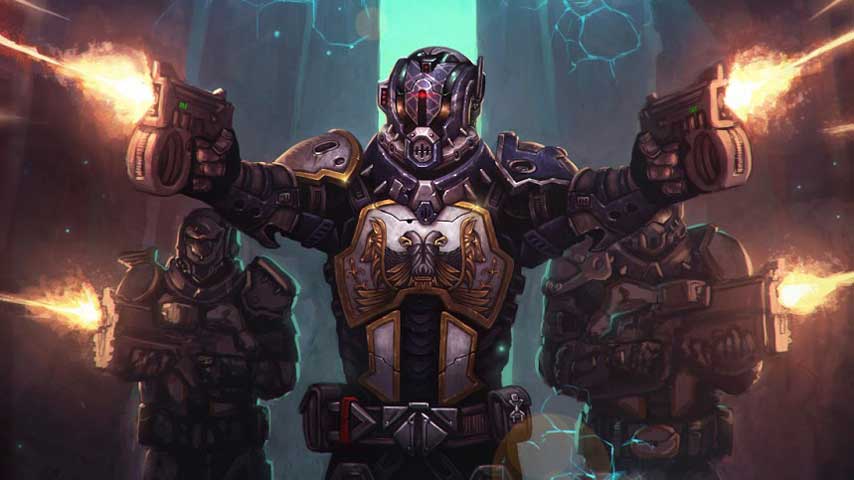 It’s hard to maintain investment in a fictional universe when it’s got such obvious cracks in it, and we didn’t really need creative director Luke Smith’s recent confirmation that Bungie has had no idea what it was doing with Destiny’s overall plot; the disconnect between the rich lore and stories available outside the game and the barren wasteland of vanilla Destiny is proof enough.

It seems amazing that a company could openly plan to build a “ten year” game, a shared-worlds universe for players to inhabit persistently, and not get its story and lore sorted out beforehand – but then, it’s amazing that Destiny released without any real ongoing content or plans to produce it, and that definitely happened.

Now that we’ve outlined why Destiny’s story sucked the big one, check back in with The Story of Destiny 2, part 2 as we pick through the improvements Bungie made to its rubbish narrative beginnings.