Classic RTS with little bit of MOBA brings the Dawn of War series up to date. 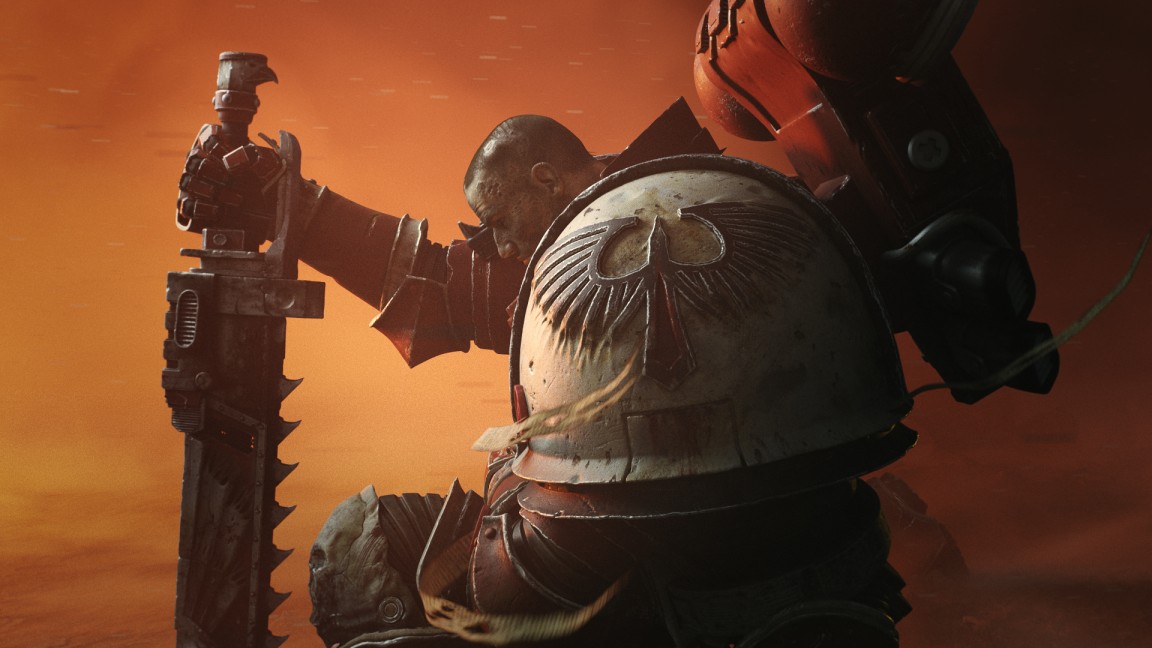 “Multiplayer is a mix of RTS norms and, perhaps more controversially for long-term fans of the franchise, popular MOBA elements taken from the likes of DOTA 2 and League of Legends.”

Expectation management is Dawn of War III’s greatest hurdle. The quality of Dawn of War II, combined with the over eight year wait between full releases, has set the bar of audience anticipation higher than any real-time strategy release in recent memory. There are those, inevitably, that are going to feel let down no matter the quality of what Relic has provided here.

Quality is, for the most part, an apt adjective for Dawn of War III. Its available factions are diverse in their skills and tactical options, the campaign is pleasingly varied and impresses upon you the importance of learning the core rule set and multiplayer matches are designed in such a way as to allow you the opportunity to overcome an early mistake.

Generally, its presentation of the Warhammer 40K universe, through visual customisation options and its chief narrative protagonists, is charming and exciting.

Even if you’re coming here for your interest in multiplayer, the place to start absorbing that Warhammer 40K charm is through the singe player campaign. Missions switch between giving you control of each of the three playable factions – Space Marines, Orks and Eldar – and, as such, offers you a chance to learn how each of them operate before testing your skills against other human players. 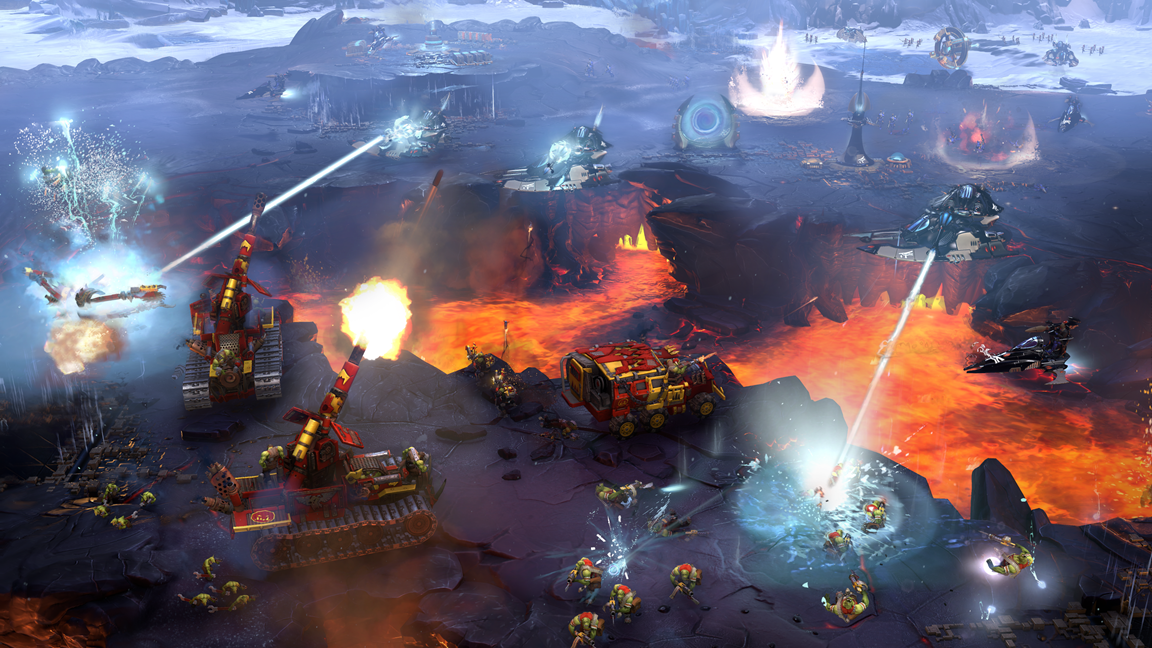 Treating the campaign as an extended tutorial for what’s to come later with multiplayer is the best tactic and seems to be how Relic itself has designed the content. Most missions, even those towards the finale, concern themselves not only with narrative progression but also with teaching you either a new game mechanic or tactical option. It pays to have experienced and understood all of these before you leave the safety net of single player.

Base building and control point capturing are the key skills to learn that covers all three factions. A far greater volume of your time here is spent thinking about construction than it was in DoW II, the resulting increase in your typically available unit numbers providing something of a safety should a certain attack go wrong.

It would be disingenuous to say that the increase in troop numbers bring DoW III inline with more traditional RTS franchises such as Starcraft or Warcraft, but the focus has certainly moved away from strict limitations on how many units you have at your disposal at any one time. 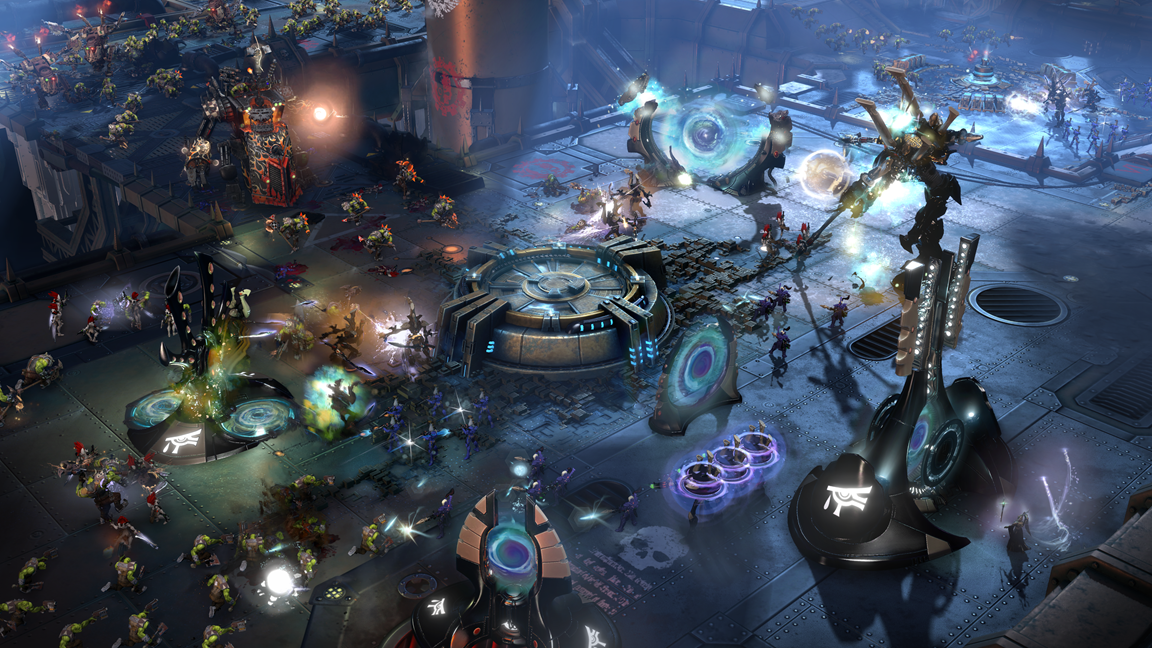 Exactly how big of an army you can command comes down to your ability to take and hold control points dotted about the map, with the greater the number the faster you are rewarded with resources to spend. It’s impossible to understate just how crucial these control points are. Simply: if you don’t have enough, you cannot provide yourself with the tools to fight.

The chief disruptor to the rigid structure of control points, unit production and base building is the presence of Elites – individuals that prevent DoW III becoming a simple game of resource management and construction efficiency. These take the form of everything from commanders whose primary job is to raise the strength and resilience of units around them to giant, bi-pedal walkers that can, quite literally, cut through and dismember everything in their path.

Each faction enjoys Elites of different power and influence, their respective impact on the battlefield represented by how rarely they can be summoned to assist you. Once you’ve managed to get your most deadly individuals in play, though, they are so difficult to bring down that you’ll likely never be without them until the mission ends. 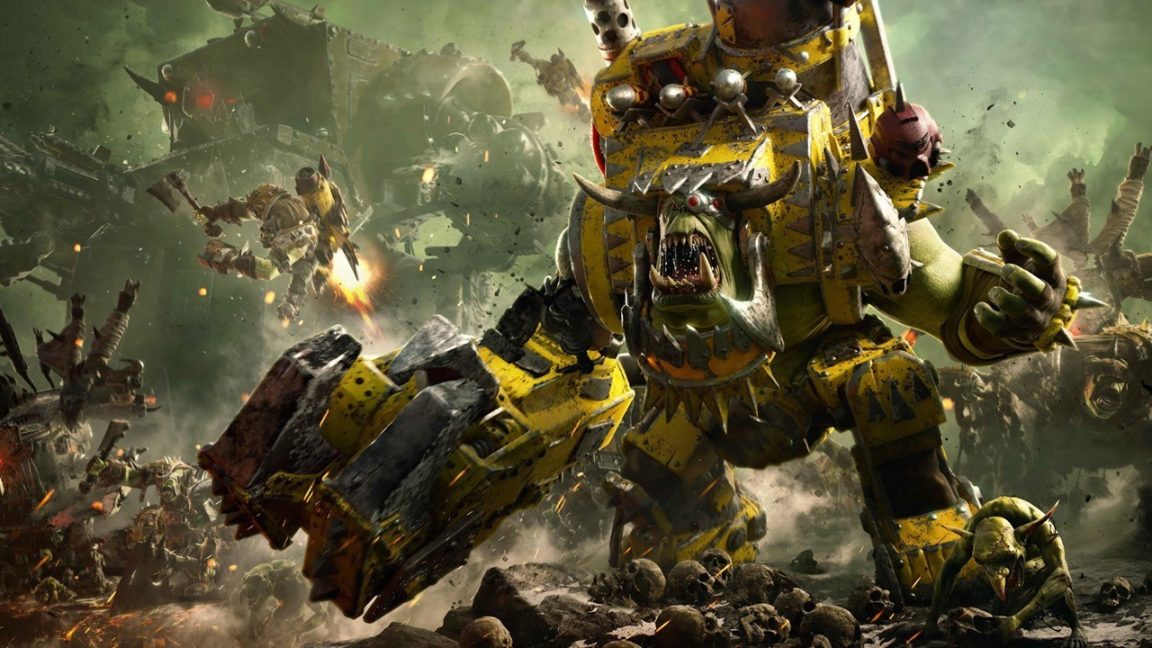 “Despite this range of strategies and the stark differences between playable factions, multiplayer would benefit from a range of game modes. As it stands, if you don’t like the MOBA-esque gameplay style then you’ve no distraction other than single player.”

That, at least, is how things stand in single player. Elites, control points and almost everything else take on a different dimension in multiplayer given the addition of other human players. With multiple Elites doing battle and skirmishes over resources taking on a more vicious and varied set of tactical approaches, multiplayer is where the bulk of DoW III’s appeal resides.

Multiplayer is a mix of RTS norms and, perhaps more controversially for long-term fans of the franchise, popular MOBA elements taken from the likes of DOTA 2 and League of Legends. Maps are laid out in such a way as to create lanes and patches of territory throughout which resource-essential control points are scattered, creating a framework that promotes the idea of purposefully allowing your opponent some ground in order to more succinctly focus your own attentions.

So long as you’re in command of more control points than your enemy then you have the upper hand. To try and control everything on a given map sees you spread yourself too thin and become unable to defend any single position from an onslaught. Ultimately, in these cases, you’re losing units so fast that you can’t replace them at an equal rate and your resources advantage is useless.

In any case, guard posts stationed at key points along these lanes prevent you from being able to easily attempt to take all control points in a single swoop – giving multiplayer matches a definitive sense of start, middle and end as you work your way through the map in a structured manner towards your goal of destroying your opponent’s base. 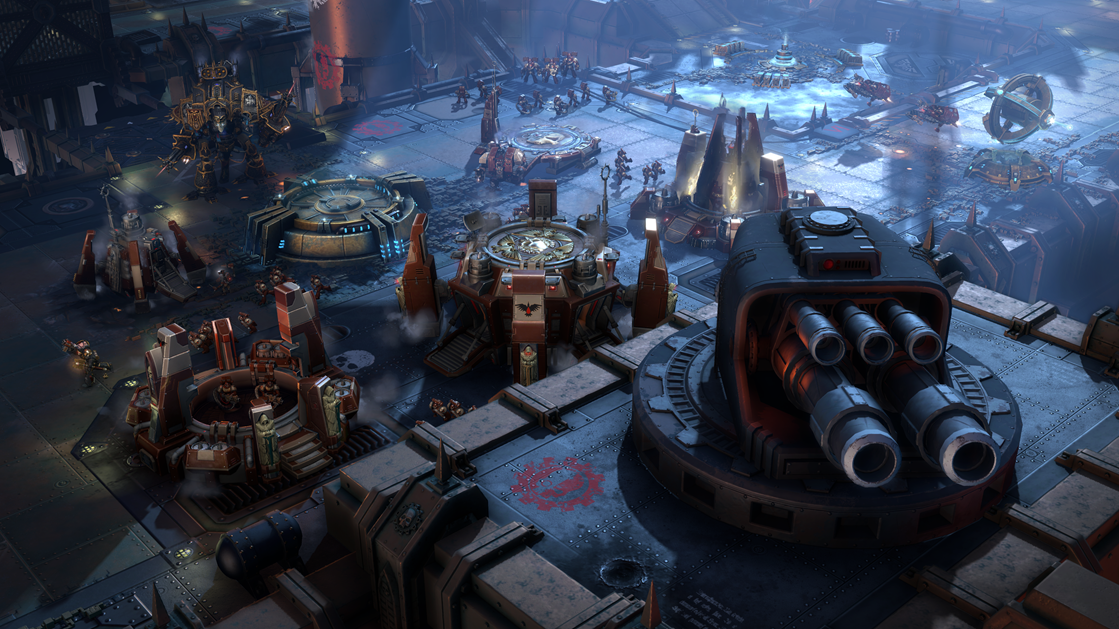 Elite units are your heroes, called to the battle whenever you choose so long as you’ve built up enough resources. You can take three Elites into each match with you and the team you choose has an enormous impact on what approach you might want to take.

If you take three lower level options then you can bring them into action quickly and start trying to gain an early, and long-term, resource advantage. Alternatively, you might opt for the most powerful examples in a bid to ride out any early pressure and launch a devastating attack that takes your opponent by surprise at the end of a match.

Understanding how different Elites work with each other and your ‘standard’ units is key to a successful multiplayer career, and you can’t even begin to formulate a plan with them until you’ve understood the core traits of each faction.

Generally speaking, Eldar are the most complicated given that many of their best skills revolve around misdirection and subterfuge. It’s not possible to know what you’re supposed to be misdirecting until you have a solid grasp of how DoW III’s other factions work.

Orks are surprisingly complex, too, once you get to know how their ability to loot scrap and turn it into machines works, but the general rule with them is that they grow more powerful the longer you can sustain an attack. Space Marines are easiest to use for newcomers thanks to the resilience of their standard units, but their option to reinforce themselves using drop pods in the thick of battle opens up a range of tactical possibilities for pinning the enemy down and surrounding them. 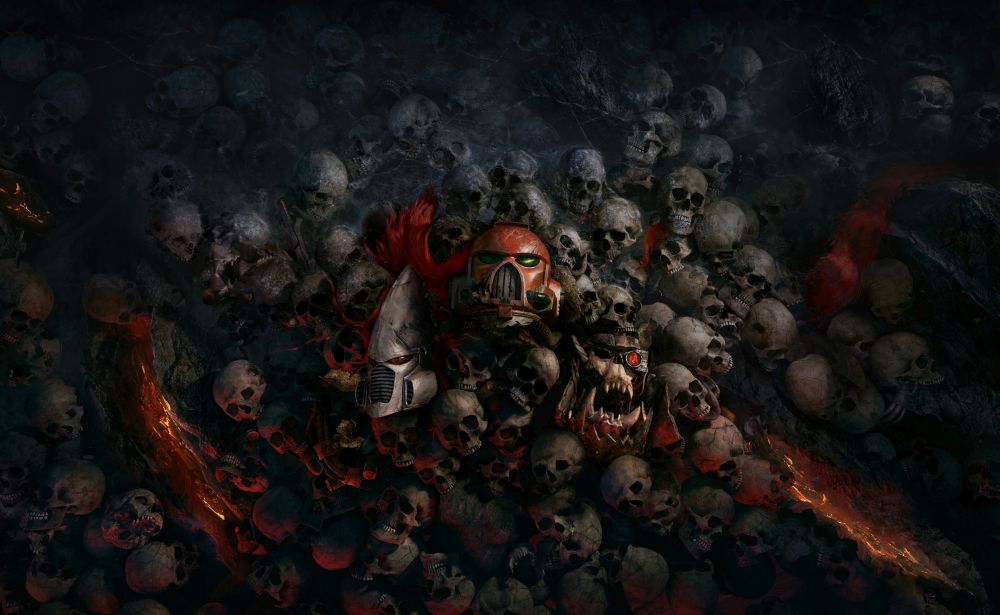 “Dawn of War III doesn’t quite live up the expectations thrust upon it by its now-legendary predecessor – but it was almost certainly never going to.”

Despite this range of strategies and the stark differences between playable factions, multiplayer would benefit from a range of game modes. As it stands, if you don’t like the MOBA-esque gameplay style then you’ve no distraction other than single player.

Still, what’s offered here is largely impressive. It can seem overly structured at times in comparison to DoW II and there will invariably be fans of the series that are disappointed in the direction taken. Relic, though, would also have come under fire if there were no changes from the previous formula.

So, no, DoW III doesn’t quite live up the expectations thrust upon it by its now-legendary predecessor – but it was almost certainly never going to. It’s likely not going to reach ‘classic’ status, but taken in isolation this is an RTS of the modern era and a worthy edition to the series.