GTA Online massive, here’s what’s happening in the first half of February. 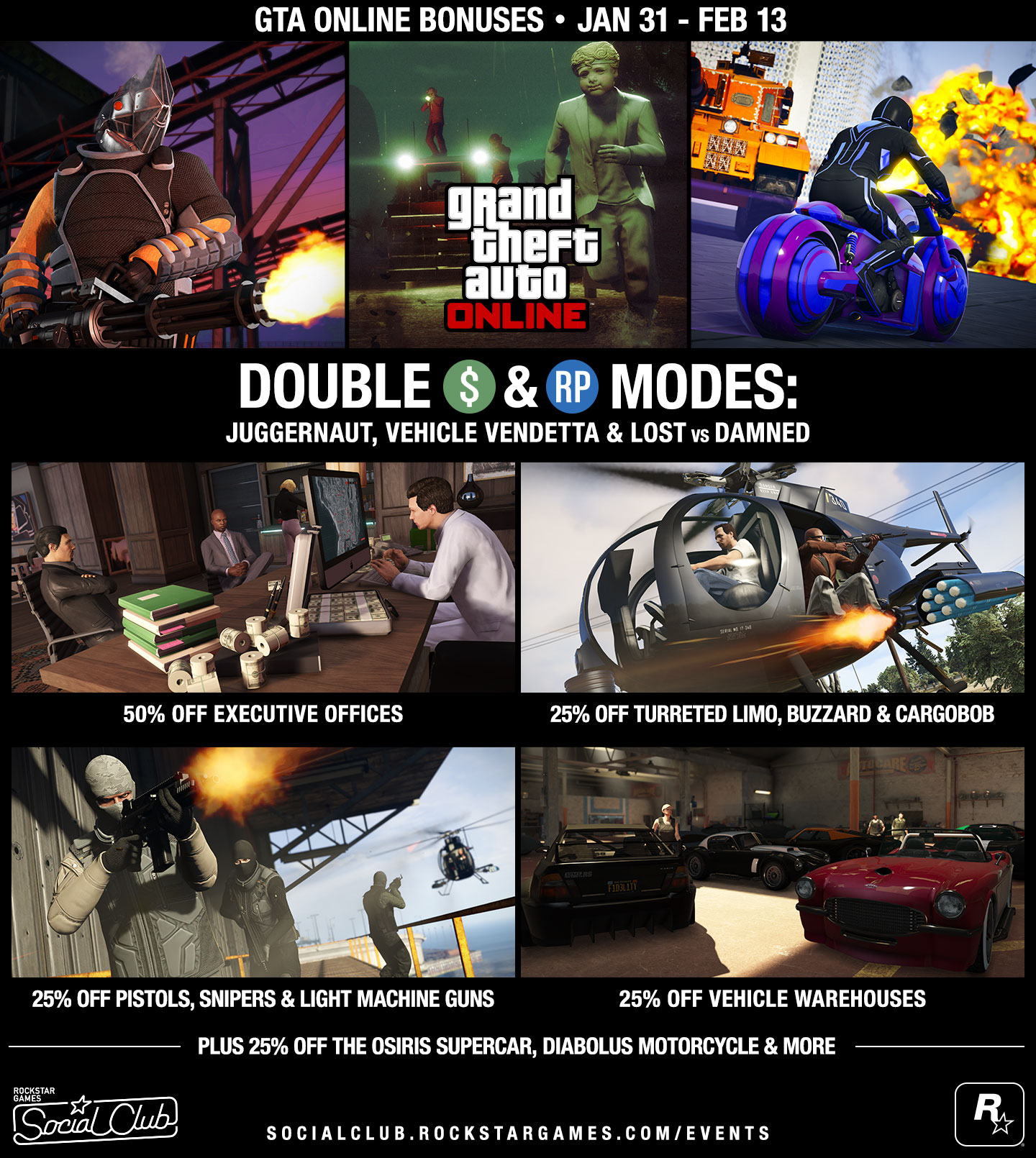 GTA Online players can take advantage of several bonus offers over the first two weeks of the month.

Right through February 13, players can earn double cash and Rockstar Points in GTA Online by checking out Juggernaut, Vehicle Vendetta and Lost vs Damned Adversary Mode missions. Look for the dedicated playlist to jump right in and get started.

Looking for another way to earn extra credit for your hard work? Check out the latest GTA Online premium races. Until February 6 check in with The Wave (locked to the Principe Diabolus) and from February 7 through 13 try Vespucci. You can launch these races from Quick Job App or via the yellow blip at Legion Square, and as usual, there’s triple RP for all participants and major cash prizes for the top three.

On the Time Trail scene, Storm Drain is featured through February 5, and replaced by Up Chiliad until February 12. Forget about other GTA Online players; just beat the par time for a nice cash and RP point bonus. Travel to the start zone and enter the purple corona to have a go.

What are you going to do with all that extra money? Why, buy yourself an Executive Office at 50% off, or a Vehicle Warehouse at 25% off. In addition to these major discounts, there are a couple of sale offers on less expensive GTA Online items. Here’s the full list:

In addition to detailing the latest GTA Online deals and featured activities, Rockstar took the time to warn players that it will cease allowing character transfers as of March 6. If you’re playing on PS3 or Xbox 360 and want to upgrade to PC, PS4 or Xbox One, get it done before the deadline and you can keep all your characters and progression.

GTA Online is no longer updated on PS3 and Xbox 360, so if you’re yet to transfer over you’re missing out on Import/Export, Bikers, Cunning Stunts, Further Adventures in Finance and Felony, Lowriders and Lowriders: Custom Classics, Executives and Other Criminals and Freemode Events, among other updates.

Rockstar has no plans to stop supporting GTA Online, apparently, so it’s probably not a bad investment.