The next big update for Windows 10 and Xbox One will bring about certain changes to the way the Home Button works, and how Windows handles games. 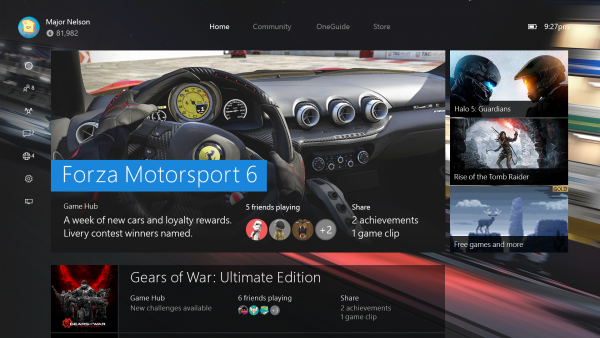 The Creators Update is the name of the next major Windows 10 update. Now that Windows 10 and the Xbox One OS are built on the same tech, Xbox users will also be seeing some changes.

Microsoft noted some of the coming changes in a blog post. Starting off with an update to the Guide on Xbox One that will make it faster to complete common tasks.

The Xbox Home Button on the controller will now pull the Guide as an overlay in one press. It will still appear on the left side like it does today. The Guide itself is also getting more features, based on the functions players use the most.

The achievement tracking overlay will be updated, as well, as will the Gamerscore, leaderboard, and Cortana’s design. New controls for background music will also be added, to make the feature easier to use.

On the Windows 10 front, the update will bring a new Game Mode to the OS designed to increase performance in games. Windows Insiders will soon be able to test it out, but details are sparse at the moment.

The company did not set a date for when we’ll start seeing these changes.