Warner Bros. and Turbine have announced on that on Friday, March 14, Infinite Crisis, will go into open beta.

Three new Champions have also been spotlighted in the videos below and are: Green Arrow, Aquaman and Mecha Superman.

The open beta will allow testers to play on the new tri-lane map, “Gotham Divided,” where two universes collide and players can battle across Gotham City and its Multiverse variant, Gotham by Gaslight.

You can resister for the open beta through here. 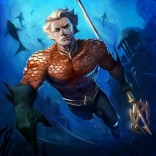