Another Infinite Crisis champion has been revealed, and its Cyborg. Along with a video featuring the high-tech champion a cybernetic all-star, Turbine has also released some new Green Lantern artwork showing three variations of the man from across the DC Multiverse: Arcane Green Lantern, Prime Green Lantern, and Atomic Green Lantern. The free-to-play MOBA is schedule for release later this year on PC. 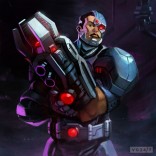