The console market is begging to be broken, says Patrick Garratt, and Valve is more than aware of the opportunity. This is the year that could change video gaming for good.

We could be about to see the biggest disruption to the console market since Microsoft launched Xbox in 2001.

We may have seen one of 2013's strongest themes emerge in the weekend's news, that of the traditional console space being disrupted by PC gaming firms such as Valve and Nvidia.

Talk of Valve's "Steambox" is accelerating quickly. It was reported on Saturday that a Valve employee has said the machine is Linux-based and console-like. A 2013 announcement was also mentioned, and we've heard similar talk - specifically related to E3 - in the past 48 hours.

The implications of the PC mind-set democratising the console space are potentially enormous. If the Steambox reports are true and Valve is capable of cutting a hardware deal that delivers a meaningful machine at a reasonable price, we could be about to see the biggest disruption to the console market since Microsoft launched Xbox in 2001.

I've been sceptical of Valve's designs on the console space. Big Picture launched last year, and at the time I wrote about how the TV-aimed app shouldn't worry Microsoft and Sony as there was still an issue over the affordability of hardware. Steam can run in the living room all it likes, but if you need a £700 PC to make it look pretty it's still for the desktop hardcore, right? If Valve delivers an affordable Steam-branded box, that argument gets thrown out with the bathwater.

There's logic in Valve making a hardware move this year. Microsoft and Sony are both about to announce their new boxes, and neither piece of kit is likely to be cheap. This means Valve will be able to come forward with a PC in the higher range of launch prices and get away with it. Tactically, if this is going to happen it should be now.

Hardware affordability aside, and far more interestingly, the console market is begging to be smashed. Microsoft and Sony's eco-systems are fascist states, brutal regimes in which partners may be decorated with medals and lavished with mansions and dancing boys, or tortured with impunity and locked in the deepest dungeons to fester and die. Indie gaming, famously, has been whimpering in PlayStation and Xbox's oubliette for years. Few extra-publisher independent titles make it outside of Steam. Microsoft and Sony are only interested in big deals.

That Microsoft and Sony are unshakably linked to brick and mortar retail hardly helps them. Console manufacturers believe they need shops to sell boxes. Shops need to make money, so they have to sell games. Because of the costs involved in putting a disc in the hands of a consumer through a shop, the price of games stays artificially high. The relationship the console-makers and high street chains currently enjoy with each other is summed up best by this picture. You can bet the media owners are going to pull the trigger at some point in the coming generation. 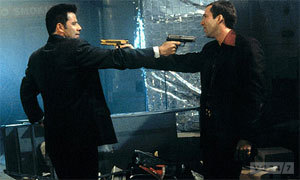 Steam, conversely, is an everything-to-everyone platform which offers downloads of thousands of games, ranging from a few pounds up to the triple-A libraries of the big publishers, and suffers none of the constraints of disc-based retail. It's about as democratic as a gaming platform gets right now. Indie's oculus and a necessity to all publishers, Steam is home to an army of gamers, both core and light. The service achieved a concurrency of almost 7 million players in the last 24 hours.

Users cannot wait any longer for something to disseminate Steam's openness away from the PC monitor, both in terms of their homes and their general lives. The need is blatantly obvious. We live in a world of Spotify and Netflix, and yet consoles have heretofore inextricably coupled games to discs. Nevermore: the internet generation demands its content on tap and everywhere. It stands to reason that Nvidia is savvy of Valve's plans - Nvidia cards account for more than 50% of all Steam usage - and likely knows there's a gap for a Steam-playing handheld in the coming year, hence the Project Shield announcement today. With Project Shield and Steambox, we have a giant, discless habitat on your desktop, your TV and on the train. With two hardware launches we have, in theory, competitors to Microsoft, Sony and Nintendo, across all their formats, coupled with one of the most robust multiplayer and matchmaking services on earth, a service that carries no sub. It makes sense, and if you're any of the current big three it's incredibly dangerous.

For the gamer, however, the prospect of a new challenger is thrilling. We could be about to see the ludicrousness of inflated digital delivery prices popped with the neatest of pins, of double-A games making sense at £10 launches, of indie going mainstream, of increased sales for triple-A. E3 this year is guaranteed to be pivotal, but if Valve arrives with a console offering it may destroy our current perceptions of video gaming wholesale. Fingers crossed.