Mad Catz has announced Damage Inc. Pacific Squadron WWII will be released in August. Previously announced at E3 2011 as War Wings: Hell Catz, the PC, PS3 and Xbox 360 game recreated World War II aerial maneuvers with over 20 hours of arcade-style combat, multiplayer and co-op modes in over 30 legendary aircrafts. Mad Catz will also be releasing a collector’s edition which includes a flight stick called the Pacific AV8R and the game for $99. Shots of the collection along with videos of the title are below. 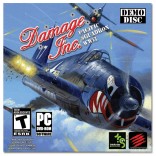