Xenoblade Chronicles is ten today - so let's chat to some of the minds behind it.

Happy Birthday, Xenoblade. The beloved Wii role-playing adventure first released in Japan on June 10, 2010 - but it didn't always look like it was going to be a huge hit.

When it first released, in fact, Xenoblade looked as though it might be a footnote in the history of the Nintendo Wii. A spiritual successor to Square title Xenogears and the Namco-published Xenosaga series, Nintendo appeared to view the game as a niche opportunity in the west. While a European release came a year later, North American fans had to petition for it to be released at all - but then something strange happened. It was a quiet, sustained hit.

The Wii had many successes, but Xenoblade is now the most active addition to Nintendo's library from that era. Its characters entered the world of Smash Bros, and on Wii U the title got a spin-off sequel. The Switch saw a true sequel roll around - and then, weeks ago, a Nintendo Switch 'Definitive Edition' re-release of the title that started it all. Xenoblade is now a Nintendo staple.

To celebrate ten years of the series and the release of the truly excellent Xenoblade Chronicles: Definitive Edition, VG247 had a chance to talk with some key figures in its inception. From Nintendo, co-producer Genki Yokota and director Yuki Sakamoto, and from developer Monolith Soft producer Shigekazu Yamada and executive director and writer Tetsuya Takahashi. Here's our chat in full for you to enjoy.

VG247: Xenoblade as a series has three different entries now, each with a fairly different style and tone. So, what would you say the defining characteristics are of a Xenoblade game to you? What makes Xenoblade, Xenoblade? Further, when you dip into Saga and Gears... what makes a 'Xeno' game?

Tetsuya Takahashi: The stories and characters that appear in the Xenoblade Chronicles series vary with each entry, but the same concept is shared among them all; it is players immersing themselves in the game world, and freely walking around and adventuring in it. Maybe it would be better to rephrase and say that the concept is to get players to want to remain in the game world. We’ve kept this concept unchanged since Xenogears, although the Xenosaga series might be the only one of these series that doesn’t follow that concept.

VG247: On this topic, there's some curious small game-connecting changes in Definitive Edition - like Alvis' necklace being changed to reference Xenoblade Chronicles 2. Is your intent behind changes like this just a nod and a wink to fans, or are these attempts to more deeply and more obviously connect the universes of the games? Do you want to draw these universes closer together?

Takahashi: From the beginning, each entry in the Xenoblade Chronicles series has depicted a single episode within the flow of a larger time and space. So they are, at their roots, closely connected with each other, but we’re flexible with changing the means and ways in which we depict this in each entry.

VG247: Can you talk a little about your aims and goals with Future Connected? Obviously, you're adding new content, but how did you decide what original characters you wanted to include, what sort of path you wanted to take with the story and what sort of combat challenges you wanted to provide? Did work on X and 2 inform your choices here?

Yuki Sakamoto: When the project started and we made a plan for the remake on Nintendo Switch, we began with the following idea: making the game something that, through the use of improved visuals and ease of play, could be enjoyed both by those who learned about the series with Xenoblade Chronicles 2 as well as those who wanted to replay this title again on an HD console.

However, given that it would be the second port of the game following the Nintendo 3DS version, we worried whether this would really be enough for players to enjoy. We rethought things with the idea that maybe players would simply want a new experience, and so partway through development we decided to create an additional story.

Once we had decided that, we thought about what content to include. In the original story, Melia and her people, the High Entia, are subjected to a cruel fate, but there was still some room to imagine how Melia moved on from this cruel fate and faced the future following the events of the original story. We focused on that point to decide on which characters would appear.

The additional scenario makes clear what kind of life Melia ends up choosing in the wake of the shocking turn of events of the original story, so I hope you’ll check it out for yourselves.

The battle system is the result of our rethinking the system to match the setting of the world following the end of the original story. It offers different battles to those of the main game, so I hope you’ll check these out as well.

Shigekazu Yamada: We had a model of Bionis’ Shoulder that was made as a test map for the original game. It’s because we had this that it seemed possible to produce roughly 20 hours of new content, depending on your playstyle. Bionis’ Shoulder made sense as a location with a deep connection to the High Entia and seemed like it would work well with the approach we had of focusing on Melia.

We also took the decision to limit the number of characters from the original game to the bare minimum. In Future Connected, Melia encounters a number of challenges. We wanted to properly depict her facing up to those.

With the battles, we did not want players to have to struggle to learn different rules to the main game. That’s why the new Ponspector battle system is intuitive to those who have played the main game, and why we made it so that the gameplay with these Ponspectors begins before battle. We’ve given them the following series of roles: you find them in the overworld, you complete their quests, they provide support during battles, you unleash a special attack with them. The more Ponspectors you befriend (up to 12) the more use they will be. I hope you’ll have fun with this concept.

VG247: As well as being a visual upgrade, it feels like the visual style of the characters in Definitive Edition has shifted. Specifically, I'd say it's moved from being more strictly realistic to being more colourful and more like anime, which in turn is closer to Xenoblade Chronicles 2. What was your goal with the new art direction? 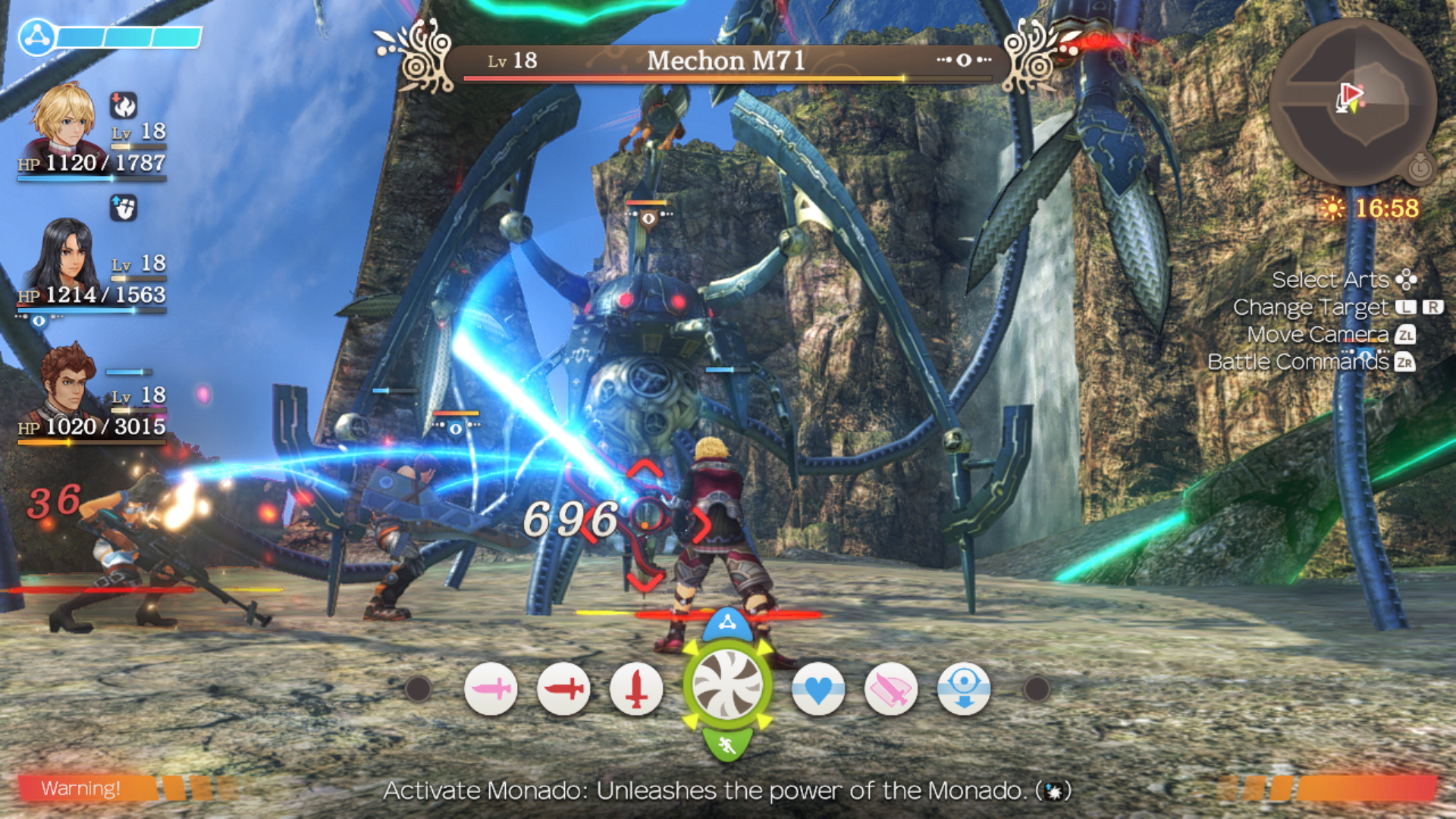 VG247: The Definitive Edition is releasing very close to ten years since the original release of Xenoblade in Japan; that's quite a long time. Were there any surprises to you when you returned to the game to see what you'd have to do to it for a re-release? How did you feel it'd held up? It seems to me like it has aged quite gracefully, but you've also make some very smart quality-of-life changes to make life easier for players.

Yamada: With the original game, both the setting and the game design were not only extremely unique, but very polished as well. We felt that, in principle, the game would still work now if we just updated the visuals to those in the HD generation.

What we aimed for with re-releasing the game like this was to fully convey the appeal of the original. The original was more than appealing enough in its own right, so there wasn’t a need to change anything, and instead we focused on making it easier to convey this appeal to players.

Specially, you can see this in things like Travel Guidance, which indicates to players the path to get to a quest destination, and Chance Arts, which use icons to show players when they can get an Art’s bonus effect, helping them learn about the fun of battling. We feel that these changes will let players do things that they didn’t do ten years ago such as using characters they didn’t use before in battle and completing quests they previously gave up on.

These kinds of guides are seen as required by players who have become accustomed to playing modern smartphone games - which are very detailed in guiding players - and so we did focus on them to an extent as modern adjustments.

Genki Yokota:While we did have some desire to re-adjust the battle balancing, we felt that it would be better if battles could be experienced as they were originally intended, and so we left things as is as a basis. We wanted to fulfil the desire for more challenging boss and unique monster battles for advanced players and so added in an Expert mode based on the level adjustment system we used in Xenoblade Chronicles 2. However, we also felt that there are more players now who can’t afford to play for long periods of time, so we also added a Casual mode for players who want a more casual play experience.

I feel that these are things that have changed over the last ten years. Both then and now, we made the game hoping that it would be a gateway for players into RPGs, and I hope now, ten years later, it will be still be a game that will get players saying they tried their first RPG game.

VG247: One of the things that really stands out about the first Xenoblade in particular is the sheer depth of combat - the way various systems like skills, party affinity, gear and so on all combine creates a lot for the player to think about. What is it like trying to find the balance in this – a balance between complexity and accessibility.

Takahashi: Our concept for battles when making the first game did not take into account players who, for example, usually play games with simple command inputs. Our main target was a slightly more core gamer audience, and so we decided on the design of the game so that those users would enjoy the controls and character building.

In making the Definitive Edition remake, we also wanted to appeal to a slightly more light-gamer audience as well, and so we implemented a number of features to make things clearer for them, such as tutorials and difficulty settings.

Sakamoto: There’s always been a lot of character customization features ever since the original version. While it was complex, I felt it gave you a sense of satisfaction when you were able to think things through and customize your character well. With the original version, I played the game not as a developer, but as a player, and so that’s how it felt for me. However, I learned from looking at user reactions that in the original, the wealth of customisation elements meant that some users didn’t discover certain options; or that if they did, in some cases it was difficult for them to understand how to use them, and so they just didn’t.

The basic game balance was already perfect in the original version and so we have left it as is. What we’ve done in the Definitive Edition is think about what we can do to get more people to naturally experience its deep game elements. That’s why we have made improvements to the customization screens and improved support on the UI to help players complete quests.