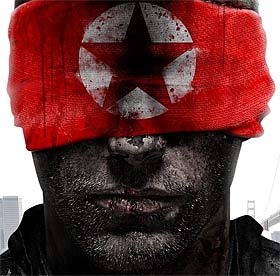 Homefront has shipped 2.6 million units. No sales figures were given.

uDraw GameTablet shipped 1.7 million units in the FY for Wii. 360 and PS3 versions to be shown at E3.

THQ attributed its strong sales performance to Homefront, which has shipped 2.6 million units. The game shipped 2.4 million units in its first week on sale, so it looks as though it has shipped an additional 200,000 units since mid-March. THQ believes this is a strategic franchise to continue with moving forward.

Year end revenue for the firm came in at $665.3 million, which was down year-over-year from $899.1 for the same period last year. Q4 revenue came in at $124.2 million with a loss of $44.1 million which was included in the firm's previous guidance.

"THQ posted strong fourth quarter results primarily driven by the success of Homefront," said THQ pesident and CEO Brian Farrell. "We have already shipped 2.6 million units, a solid start for this new franchise, which kicks off the strongest pipeline of AAA core games in our history.

"We also continued to grow the uDraw franchise with the successful international debut of this compelling new tablet. Today, I am pleased to announce that we plan to bring exclusively designed uDraw GameTablets to Microsoft Xbox 360 and Sony PS3 platforms this holiday.

"We expect to generate significant growth, profitability and cash in fiscal 2012, driven by the latest installments of multi-million unit selling franchises, Saints Row, Red Faction, Warhammer 40,000, MX vs. ATV, UFC, WWE, and uDraw. We are creating a digital ecosystem for each of these games that will continue to keep consumers engaged and generate additional revenue opportunities beyond the initial retail sale. We also continue to aggressively invest in our digital initiatives, including online social and mobile offerings as well as our Warhammer 40,000: Dark Millennium Online MMO."

A Jimmy Buffett Margaritaville game is planned for Facebook. More on that and the uDraw Tablet for PS3 and 360 will be revealed at E3.

A new VP of corporate communications

The firm also announced that Angela Emery as VP of corporate communications and will work under president and CEO Brian Farrell.

"Angela brings with her a wealth of diverse interactive entertainment experience, and THQ will see immediate benefits from her leadership," said Farrell. "She will use her experience to make significant contributions in our corporate communications and product strategies."

Emery comes to THQ after eight years at Disney Interactive Studios where, as vice president. She has also worked for Fox Interactive and Sega of America. She also managed public relations strategies for Microsoft Game Studios while at Edelman Public Relations Worldwide.

Notes from the investors call

THQ plans to release a steady core of titles for the rest of the year, along with a steady flow of lifestyle products, and increased digital offerings.

UFC Personal Trainer is out June 14, Space Marines in August, Saints Row: The Third this holiday, and a new and improved WWE which is promised to look better thanks to the revamped tech.

In March a new UFC game for FY12 will be released as well and will also have revamped tech and will be aimed at both the core and casual fighting audience. This game, and the ones mentioned above will be shown or chatted about a bit more during at E3.

MX vs ATV: Alive hits next week, and the DLC for it will be "robust and will allow customers to build customizable experiences." The firm doesn't expect the PSN outage to have an effect on the title as it has long-term DLC prospects. THQ also expects the service to be up in time for the game's release, but does not think it will impact the game if it isn't due to the game's long-tail prospects.

Six new titles for uDraw are in the works, and THQ will be showing the slimmer tablet for PS3 and Xbox 360 at E3 in June which will have the "HD customer in mind."

THQ expects online and digital revenue to grow rapidly for FY12 versus FY11, and even projects it to double as its is a "strategic priority" for the term.