Steep players will be heading to Alaska next month and it will include the first Branded Challenges. 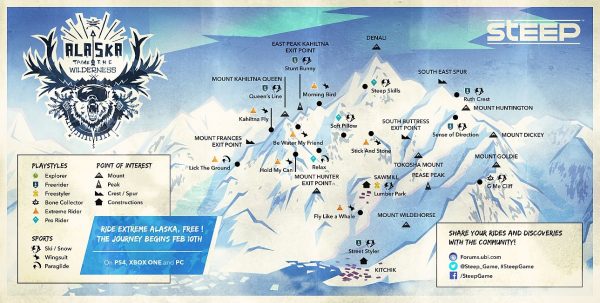 According to Ubisoft, these challenges will reward the "fiercest players" with Steep credits as well as reputation points. Branded Challenges will also be made available in the Alps via a planned second phase.

The free, Alaska open-world will be globally released on February 10.

In the meantime, Steep Update 1.04 has been released. It includes the Steep World Tour Tournament, two new types of Challenges.

Players can sign up for the tournament, which will be a monthly series available to the entire community. The first competition, Backcountry, kicked off yesterday with the qualification phase. Skiers and snowboarders will have to reach 5,000 points to make it to phase two, the Tournament.

The 32 best players on each platform during the Tournament will make it to the finals. Here, they will compete to win Steep credits.

Community Challenges are one of the new challenge features. Steep players can participate in these user created challenges to achieve the highest score, gain reputation points, and to be on the top leaderboards for each community challenge.

The development team will also be creating challenges where players will go up against the Steep team to try and beat their scores.

Along withe the challenges, update 1.04 also fixes myriad of issues, lets players hide the HUD, adds a Director Mode and more. Patch notes are through the link.

Steep is available for PC, PS4, Xbox One. It will also be released on Nintendo Switch, but is without a release date.