Rocksteady has issued an official response to allegations of harassment in the workplace.

According to Rocksteady since the initial 2018 letter regarding harassment of female employees was received, it has dealt with the issues raised.

Rocksteady states that in response to the initial communication, it met with female staff and "dealt with the issues raised."

"All formal complaints were thoroughly investigated, addressed appropriately and a number of serious measures were taken in response to the issues that were surfaced, including discipline or termination of staff," reads the statement.

Since the issues were brought to light, it implemented ways of ensuring it "makes good" on its "commitment to inclusion," such as asking female staff members to provide feedback about the portrayal and behavior of characters in the games develops.

It was also stated in the official response that the company is working diligently to increase the ways it can support everyone.

"We want to know if there are issues that have not been raised no through our formal channels, so we can address them. As such, we have engaged the services of an independent third party to confidentially speak with all employees at Rocksteady who wish to do so. We will also be reaching out to every former female employee who left in the past 2 years to ask them to speak to the interviewers."

The studio also reiterated the letter it posted earlier in the week was not an official response.

Here's the studio's full statement which was posted to Twitter (thanks, Blue). 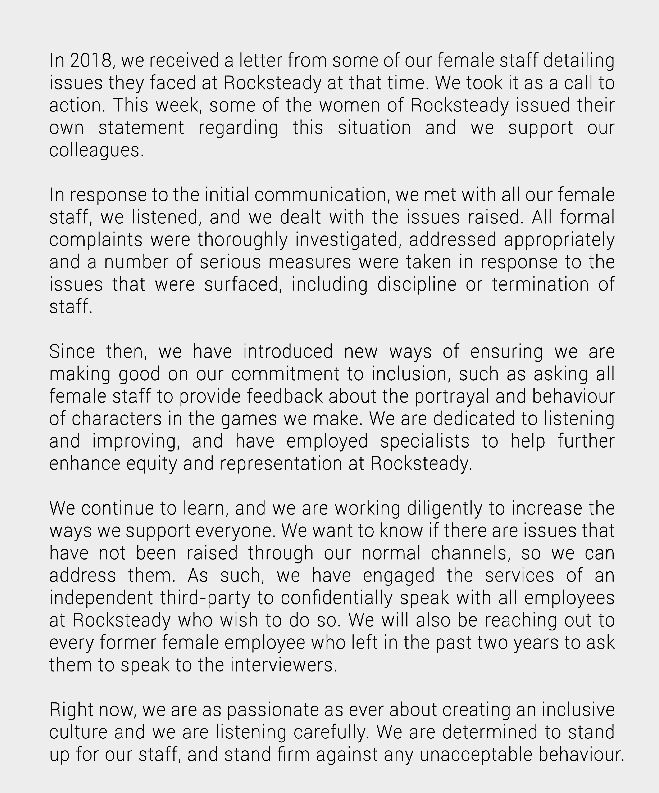 Earlier this week, Batman developer Rocksteady Studios was accused of ignoring harassment in the workplace. According to a report from The Guardian, female employees at Rocksteady sent a letter two years to company bosses citing inappropriate behavior and sexual harassment.

The letter was issued in 2018, and 10 out of 16 female staffers signed it. According to the report, one of the women came forward due to what she felt was Rocksteady’s lack of response. She stated it was felt by her that employees were still suffering from sexism, harassment, and inappropriate conduct.

Rocksteady responded, unofficially, by posting the aforementioned unsolicited letter it received from female employees regarding the Guardian’s report. It was sent by seven of the female Rocksteady staffers that signed the initial 2018 letter, and stated all issues were addressed immediately, and not two years later as the Guardian report claimed.

Today, during a DC FanDome panel, the studio will reveal its new game in the works, Suicide Squad: Kill the Justice League.