Ahead of the launch of PS4 in North America on Friday, Stace Harman visits Sony’s UK HQ to poke at a handful of launch titles and zip around PS4’s shiny new UI. 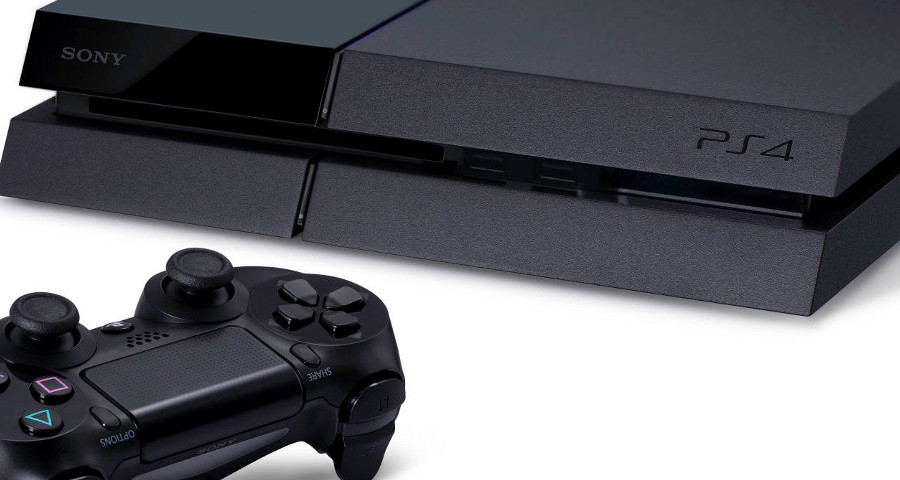 A host of details, screens and videos for cutsey-platformer Knack can be found through here.

Friend of VG247, Dave Owen, has spoken to Resogun developer Housemarque about the pressures of being a PS4 launch title.

A rundown of the new features of the PS4 UI can be ingested here, while Sony has also shared its thoughts on the future of PS Plus.

Smell that? That heady aroma of raw power, untapped potential and expensive plastic lets us know that a new generation of console hardware is about to drop.

It’s been a long time coming; so long that a whole new generation of video game players has been born, progressed through several years of school and become effortlessly better at many games than some of us old crusties will ever be. I’m not bitter, you understand, I’ve just had to stop humouring my friends’ kids and start really trying to beat them.

It’s perhaps no surprise, then, that since the start of the current gen in November 2005 and the beginning of the next on Friday of this week, an awful lot has changed with regard to attitudes towards games, too. Playing games is now a legitimate form of family entertainment and an increasingly connected and social experience.

Visiting Sony’s UK HQ this week it was plain to see that the blockbuster titles will continue to provide just as loud and shiny a focus on PS4 as they have on PS3, but also that there’s ample room and serious intent when it comes to more varied experiences for a wider audience. This isn’t just in terms of games, but also in the manner in which we experience content and share it with people; myriad small things that add up to a more complete whole. But enough theorising, let’s take a look at some tangible examples of what I’m talking about.

The Games
I spent time with three games over the course of a morning’s play and all three offered something different in terms of focus, content and takeaway message.

The first was Knack, the child-friendly platformer that its creator – and lead PS4 system engineer – Mark Cerny intends should call to mind titles like Crash Bandicoot. With its bright visuals, bold character archetypes and some the cutest goblins you ever did see it screams “KIDS GAME” and yet even on normal difficulty it’s no cake walk.

Knack, the titular hero of the piece, is built of an assortment of relic pieces and grows in stature and power upon collection of them. He starts off small, cute and somewhat reminiscent of Ratchet’s robot sidekick Clank but can grow into a much larger beast-type character that bears similarities to Street Fighter’s Blanka. Stringing three moves together nets you a slow-motion finisher, while collecting sunstone energy opens up a number of special smart-bomb style attacks. Some basic puzzle elements require Knack to use pieces of himself to power machines, which reduces his size and power, and hidden secrets harbour power-ups and sunstone energy.

Knack’s biggest surprise is the challenge it presents. Dodging is essential if you’re to prevent Knack being smashed into tiny pieces and so adults or older siblings who might start by indulging a younger member of the family with the local co-op may find there’s more to keep them occupied than they first supposed. Some of the check-pointing feels a little wonky but overall, Knack serves a prime example of how the younger generation are being catered for but not pandered to. 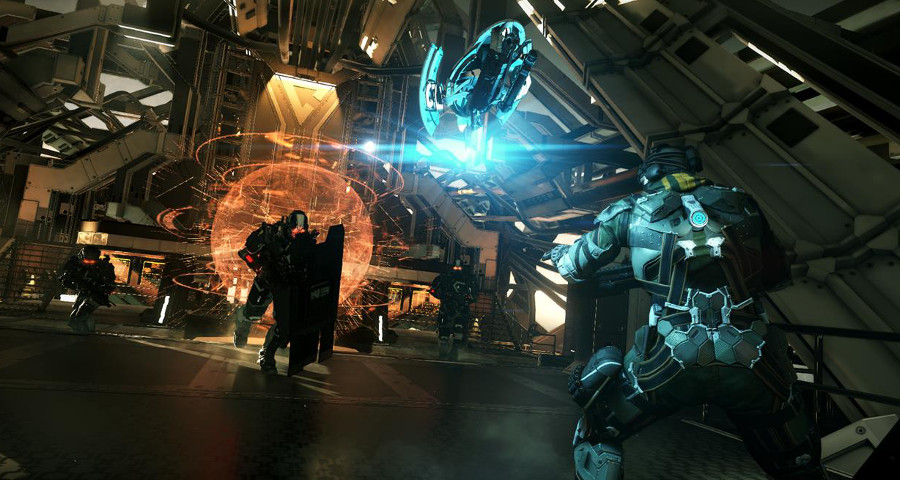 Killzone Shadow Fall, on the other hand is targeted very much at the core gamer who wants something shiny with which to show off their new console. More than sexy lighting and particle effects, though, Killzone also offers a very clear indication of the simple but effective way in which the DualShock 4’s touchpad might be utilised by the first wave of shooters to grace Sony’s console.

As is currently standard, the D-pad directions are used for selecting weapons, gadgets and highlighting objectives. However, Killzone Shadow Fall’s USP is its OWL drone, which has a number of functions and modes that are accessible by the touchpad. So, you swipe up to set OWL in attack mode, right for a deployable zip-line, left for an electrical overcharge and down to select a static shield. Then a tap of L1 activates the chosen command in addition to some context sensitive actions such as hacking alarm turrets.

In this example, the touchpad effectively becomes another set of D-pad shortcuts that, owing to the touchpad’s placement in the centre of the DualShock 4, can be easily accessed by either thumb. It’s not the most sensational use of the new controller technology, perhaps, but it’s encouraging to know that developers won’t necessarily be trying to force needlessly elaborate touch controls into a game when it can be better served by simplicity and function.

The third of the three launch titles I played was Resogun, the side-scrolling score-attack shoot ‘em up from Super Stardust developer Housemarque. This one has old-school shooter written all over it and yet is being delivered by the comparatively new method of being free on day one to all PS Plus subscribers.

The most immediately unique thing about Resogun is the curiosity of its cylindrical level design. Each of its five levels – consisting of multiple phases – is best described as a side-scrolling level whose ends meet to form a cylinder. You can see the far side of the cylinder in the background, which has useful game play implications and move left or right to traverse back and forth.

New ships with varied weapons, strength and manoeuvrability can be unlocked and each has an Overdrive facility that provides a focused beam weapon that both pulverises enemy ships and actively increases your score multiplier. Saving pixel-based humans from death and abduction confers various bonuses while huge boss ships move around the cylindrical level structure and present hard to reach weak spots.

Despite Killzone’s grand nature, it was Resogun that most impressed me with its aesthetics. At 1080p and 60fps it might not be doing anything that wasn’t once upon a time promised as the future of PS3 gaming but being mesmerised by its slick and sleek visuals (without a smidgen of slowdown) serves as a reminder of difference such performance can make to the overall experience, not just to numbers on a page. 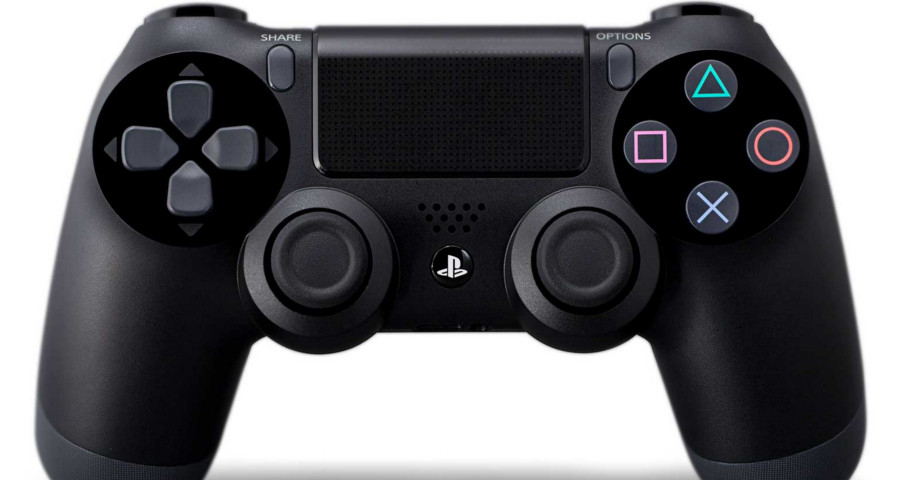 Each of the three titles offers a different hook for Sony’s refreshed and overhauled approach to its audience and while none of these titles scream next gen in terms of game design, they all incorporate elements of PS4 in their DNA – watching Killzone Shadow Fall run seamlessly on a Vita via real-time wireless Remote Play highlights just how far the tech and net code has come in the last few years.

Underpinning the game experience is the PS4 UI, which features a raft of new social features and refined design that serve to highlight just how sparse and dry PS3 XMB has been for many years. Some of these new features feel quirky or throwaway, such as the ability to control the PS4 with Kinect-style voice commands via the PlayStation 4 camera or headset, and the option to log-in to your profile via facial recognition.

However, some others have some immediately appreciable advantages and perks. The PS4 activity feed shows you what your friends have been up to, what games they’ve been playing, achievements they’ve been collecting, and pictures and videos they’ve been sharing, while the option to manage the friends list with Facebook-style levels of privacy options means you can separate out your real-world friends from your virtual-only buddies.

There’s also a great deal of related content available for all games, be it developer videos, notifications of new DLC or PS Trophies (ranked by global rarity) to have a crack at. All of the PS4 interface options can be quickly accessed thanks to the increased speed of the OS and switching from one area to another is near instant, without the need to wait for options to load or lists to be populated. This, really, is just the tip of the improvements to the PlayStation UI and they’ll likely be more news on this coming over the next couple of weeks leading up to the console’s EU launch on November 29.

Many of the things I’ve talked about here, both in terms of games and interface are small, seemingly incidental changes but after several hours spent navigating through them and understanding how one informs the other I believe that they are going to translate to real improvements in how we interact with the next generation of consoles. Change in this instance isn’t something to be feared but something to be celebrated.

PS4 launches in North America this Friday Novemeber 15; in the EU and Australia on November 29 and throughout the rest of the world through December and into early next year.