Video games are and perhaps always will be a very transient medium. Technology is always moving forwards, and with it so to do video games. If it's not upgrades to the audiovisual experience, it's changes to how we receive games at all - mobile, streaming, digital downloads. Making the old new again in that environment is no easy task - but indie start-up Analogue is working absolute magic in that area.

The latest effort from Analogue is the Mega Sg, a tiny little console that is meant to serve as a Sega Mega Drive (or Genesis, for you heathens who call it that) for the modern era. We're reaching a point now where original Mega Drive hardware is prone to failure, transistors simply naturally burning out after thirty years of operation. The Mega Sg essentially serves two purposes: it's a combination replacement and upgrade for owners of original hardware, but it's also a slick, bang up-to-date machine for younger players who might want to go back and experience this classic era of gaming history for themselves.

The Mega Sg launches at an interesting time: as it ships, Sega is slowly but surely announcing more details about its own Mega Drive Mini, a mini re-issue of the Mega Drive that will come pre-loaded with some of the most beloved games of the era. There's a key difference, however: the Mega Drive Mini will be a hopefully modestly-priced buy with a fairly basic feature set, the sort of thing that will be purchased en masse as a gift for casual gamers of the era with a nostalgia itch to scratch. Like Nintendo's mini console releases, it'll ship with a set number of games and that'll be that. The Mega Sg, meanwhile, is designed more like the original machine: it takes any cart from the era and uses more expensive technology to create an experience extremely close to the original hardware, albeit upscaled to modern resolutions. 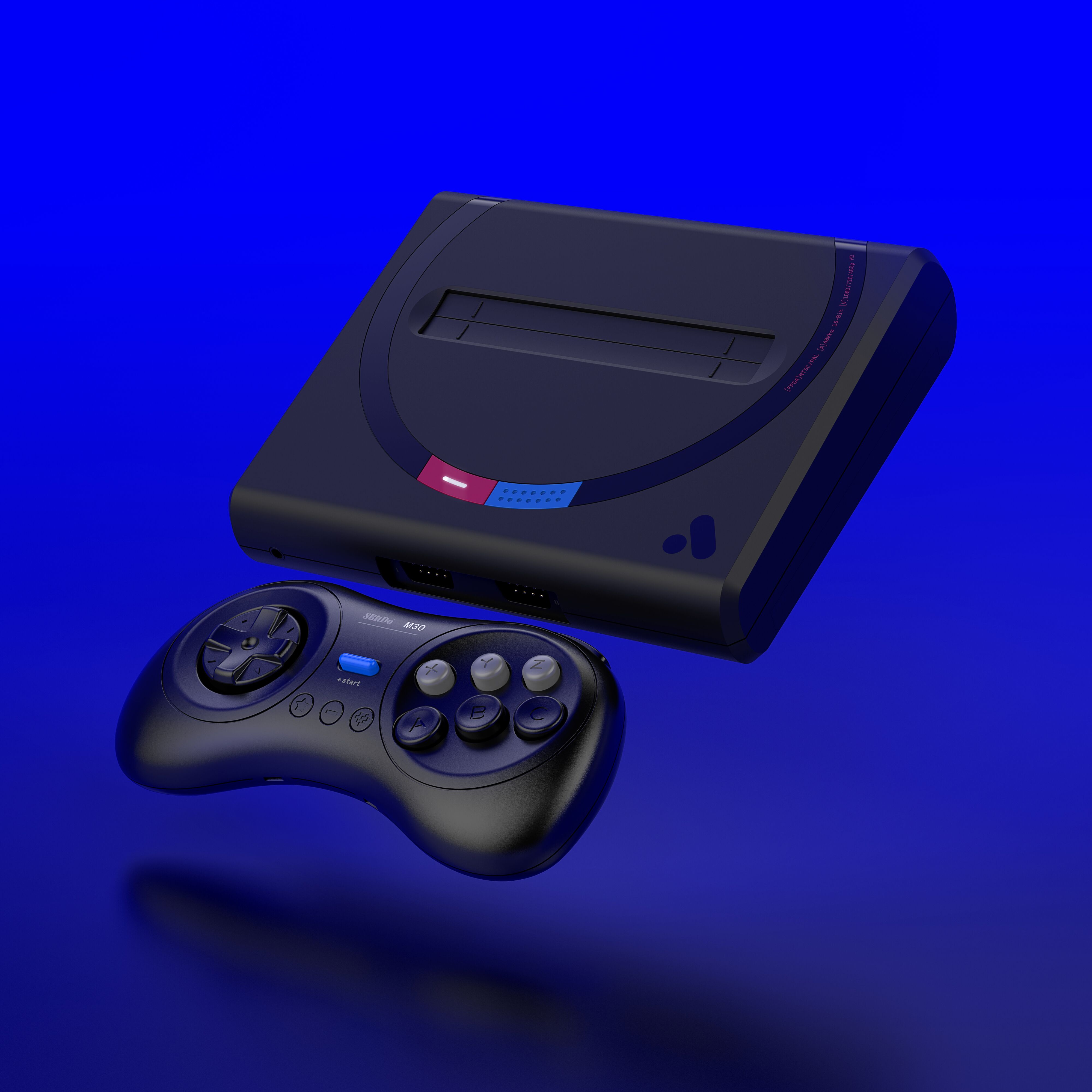 Analogue has been here before, of course. A little under a year ago we spoke to Analogue CEO Christopher Taber about the Super Nt, a modern version of the Super Nintendo that in practice is more or less identical to the Mega Sg. One is based off and resembles the Sega machine of the era, the other Nintendo - but they share a similar footprint and feature set alongside an identical design philosophy: to be the best possible way to play these classic games in a modern context and on current displays.

Back in that old interview, Taber compared Analogue's machines to a high-end turntable for vinyl records. That comparison checks out. Emulation powered mini consoles and re-releases are all well and good, but some players might want something more, something with a higher level of accuracy and compatibility to the original era. Based on a week or so of testing, the Mega Sg is very much that, like the Super Nt before it.

Most of these mini consoles you see are essentially powered by off-the-shelf hardware. In many cases it's a board akin to a Raspberry Pi running some form of Linux and a software-based emulator. The Mega Sg does things differently, using something called FPGA - Field Programmable Gate Array. That's a term as obtuse as Blast Processing to most of us, but pushing beyond the techno mumbo-jumbo, it's basically a custom chip hand programmed to masquerade as another chip. In this instance the FPGA chip is pretending to be a Sega Mega Drive - so rather than emulating at a software level, the work here is happening at a hardware level on the entirely proprietary guts of the Mega Sg.

There's an easy, idiot proof way to test this, by the way. Take the Retron 5, another third party console re-release: when you insert a cart into that machine, it simply dumps the cart into the system's memory and runs it from there as a local file. Obviously this is also how the official mini consoles work - they run a ROM from memory. The Mega Sg actually reads from carts in real time, just as the original machine did. Thus the test: if the cart gets knocked or jiggled by an annoying sibling or an over-active pet, there's a good chance the game will crash - just like in the good old days. The crashing thanks to fighting a sibling over the controller isn't the part of the classic experience we care to replicate, but the point is that reading from the cart in real time is one of many aspects that contributes to the accuracy of this machine.

In theory, ninety-nine percent of the time the Mega Sg should be near enough indistinguishable from original hardware - and in side-by-side tests we've undertaken, it certainly seems that way. Because there is no operating system running between the game and the hardware, lag typically introduced by other emulators is absent. Because it's been reverse-engineered at a hardware level, the hallowed Yamaha YM2612 sound chip sounds as it should here - where it often doesn't on emulators. As if proud of this fact, Analogue has also dropped a 3.5mm headphone jack on the front of the Mega Sg - just in case you need to bop to those Streets of Rage tunes discreetly.

As with the Super Nt, Analogue will issue firmware updates after launch, tweaking the FPGA setup to ensure absolute compatibility with every game on the market.

Beyond stunningly accurate recreation of the play you'd get on an original Mega Drive or Genesis, the Mega Sg also of course serves games up in a more 2019-friendly format. The machine outputs up to full 1080p, and the front end (which was designed by Phil Fish of Fez fame) allows you to tweak the experience with a variety of settings - scalers, scan lines, audio tweaks, region swapping and more. There's even a setting to tell the Mega Sg what to do on boot up - so if you want it to boot straight to cart like a regular Mega Drive, you can.

It's worth also noting that those wanting the legally dubious option to play ROMs of games from an SD card, that option isn't officially supported - but hacked alternative firmware supporting this option showed up for the Super Nt within about a week of release. The Mega Sg has an SD cart slot, but it's strictly for firmware updating. The Mega Sg also runs flash carts just as well as regular games from our testing - though this is really primarily designed for experiencing original carts. 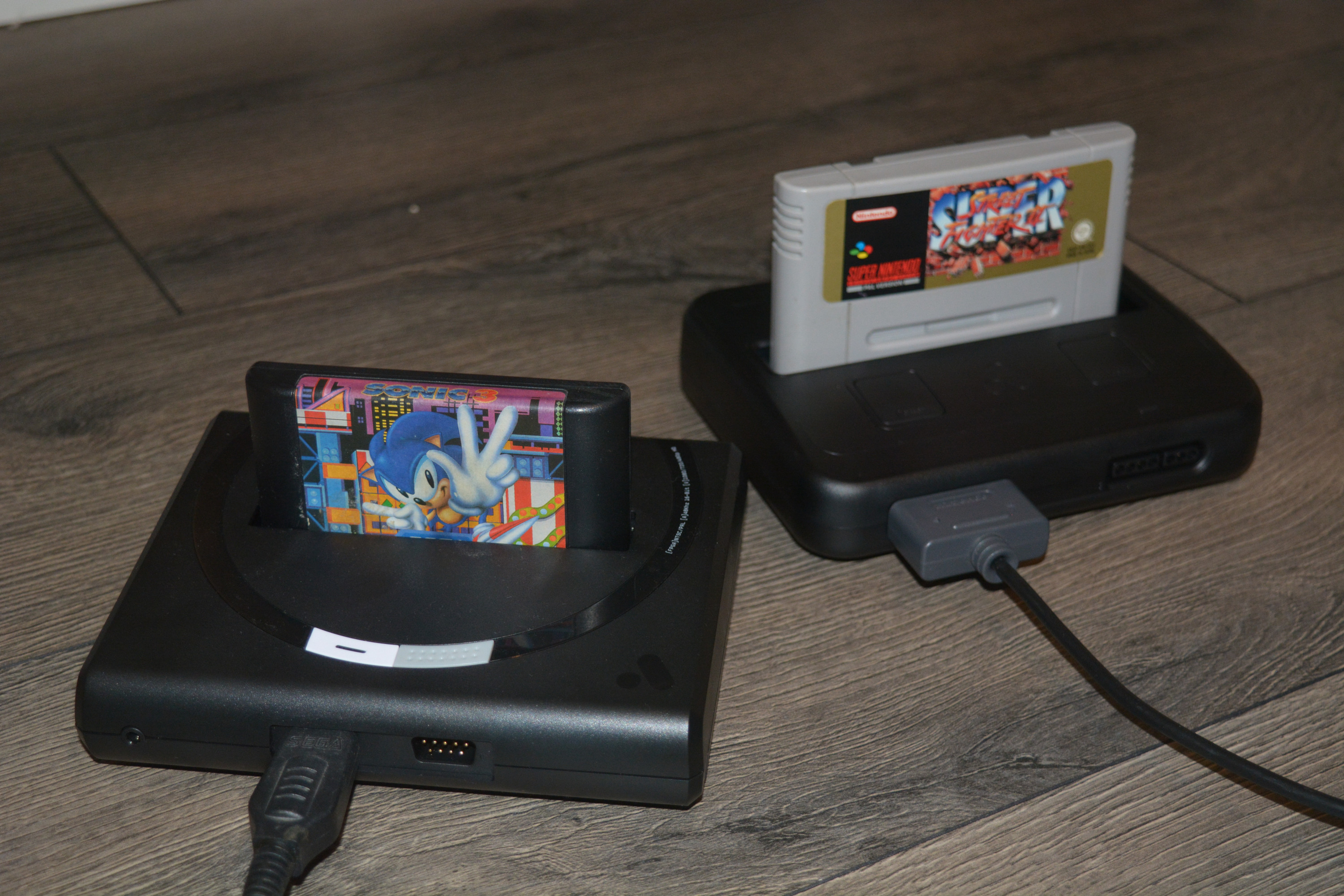 After playing and loving the Super Nt so much, I was pretty confident that the Mega Sg would end up being a solid machine. What's blown me away in this review period, however, is the depth of support offered. Sega fans of the era all know that the company went down a bit of an insane path in those nineties years - endless add-ons and accessories - and I was surprised to learn that a lot of them work.

The biggest bonus is the Mega CD. There's no proprietary CD add-on for the machine - instead, it comes with exactly the same port hidden on the underside of the machine as on the original Mega Drive models. This means despite it being a fraction of the size you can happily slot it atop a Mega CD or Mega CD 2 and then drop in a copy of Sonic CD or Night Trap - and they'll get all the benefits of the Mega Sg including a 1080p output. The diminutive console looks a little silly atop the behemoth Sega CD, but the compatibility is brilliant. I was able to slot in NBA Jam CD, plug in an original four-way multi-tap and have four player action with ease.

Furthermore, Analogue says it plans to release further adapters down the line to allow compatibility with the Game Gear, Sega Mark 3, SG-1000 and SC-3000 machines - meaning this could become an incredible one-stop-shop machine for 2D Sega action. The only major absence, in fact, is the 32X, a Mega Drive add-on with a more complicated manner of connecting - but Analogue say they're looking into this and hope to eventually address this either through a firmware update that enables the original hardware to be connected, their own adapter, or both.

In terms of controllers, the original ports are present - so you can use any standard controllers that worked on the original hardware. Analogue also recommend 8BitDo's wireless Mega Drive controller as an option for the Mega Sg. That's in fact the controller pictured in the official vanity shots of the machine. Keep in mind that the Mega Sg doesn't ship with a controller - so you'll need an original, a reproduction or one of the wireless ones to play. I personally still prefer using my original pads, and they can of course be had off eBay cheaply enough.

Consider my nostalgia stoked. In the week since owning a Mega Sg, I've fired up eBay and purchased a few hundred pound's of games and accessories I'd always wanted as a kid but never got around to owning. That's probably a very sound endorsement. This isn't just about nostalgia, however: it's something more. Earlier this week I wrote an article about how Google vision of a Stadia-led future was exciting but also a terrifying prospect for the preservation of gaming history. The Mega Sg is the sort of product we need more of: quality to its core, and dedicated to ensuring classic games can be played as closely to how their designers originally intended as possible. I can't wait to see where Analogue turns its attention next.