Konami's kicked off the Kojima Productions special stage show. Brace for potential bombs and watch it live below the break.

Metal Gear Solid HD Collection dated for November 23 in Japan for ¥5,480, but no western release date as yet.

An Ultimate Collection will also launch for ¥9,980.

Peace Walker HD to launch two weeks before HD Collection in Japan on November 10 for ¥4,980.

The main headline from the event was that the Metal Gear Solid HD Collection now has a date, in Japan at least. It'll launch on November 23 for ¥5,480 on PS3 and 360. No western release date was confirmed, but we'll get onto Konami UK about that.

The Collection will have HD remasters of MGS2: Sons of Liberty, MGS3: Snake Eater and MGS: Peace Walker, with the latter getting its own separate release in Japan. It'll be bundled with the Collection in the West.

It'll also have the first two original Metal Gear games from MSX - they were first included into the Subsistence release of MGS3 back in 2006 - with the PS3 SKU getting a PSN download code for the PS1 version of the original Metal Gear Solid from 1998. This is all for Japan, though.

Peace Walker HD gets out before Collection, Rising reiterated for 2012

Metal Gear Solid: Peace Walker HD, which will get a separate release in Japan unlike the west, will launch on November 10 in the country for PS3 and 360 for ¥4,980. Kojima reiterated Transfarring support for PW, adding that a download code for the PSP version will be included with the PS3 SKU.

Peace Walker will arrive in the west as part of the Metal Gear Solid HD Collection in the west.

A Metal Gear Solid 5 logo was also shown for some reason. But hold station: this was for Peace Walker. Its been previously noted that Kojima Productions was going to have Peace Walker be a numbered MGS title, but dropped it before its E3 2009 unveil. Needless to say, there wasn't a name change. 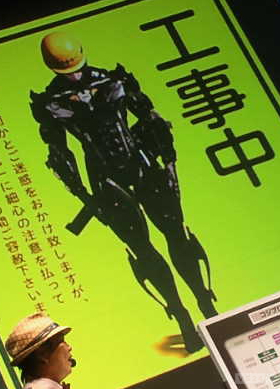 The hard-top Raiden from MGS: Rising
that was shown on stage today.

Kojima also briefly touched upon Metal Gear Solid: Rising, reconfirming it was still on for a 2012 release. A new piece e of render art of Raiden in a hard-top construction hat was shown at the show.

Beyond that, not much else was spilled. The game was announced at E3 2009, but very little has been shown of it since then. It'll release on PS3 and 360. More on Rising has been promised for this winter, though.

Zone of the Enders, MGS 3DS take up rest of the spotlight

In a show which was mostly dominated by a man peeling off stickers from boards whilst revealing details on the titles from the show in front of Kojima and its female host, as well as revisiting past Metal Gear games from the Collection, Metal Gear Solid 3DS: Snake Eater and Zone of the Enders HD Collection also took part.

Nothing of note from MGS 3DS was spilled that was already known of during the show.

After Peace Walker's appearance came the Zone of the Enders HD Collection, which will contain the first Zone of the Enders from 2001 and 2004 sequel The Second Runner. The teaser trailer shown at the Sony TGS press conference yesterday aired during the stage show, but with a 360 logo added at the end this time.

A specific date still wasn't dropped other than still just 2012, with Kojima reiterating it'll also be coming to Vita - as announced yesterday - and that it'll have Transfarring support between the PS3 and Vita versions.

A ZoE-specific stage show will happen on Saturday morning at 1pm JST (5am BST).